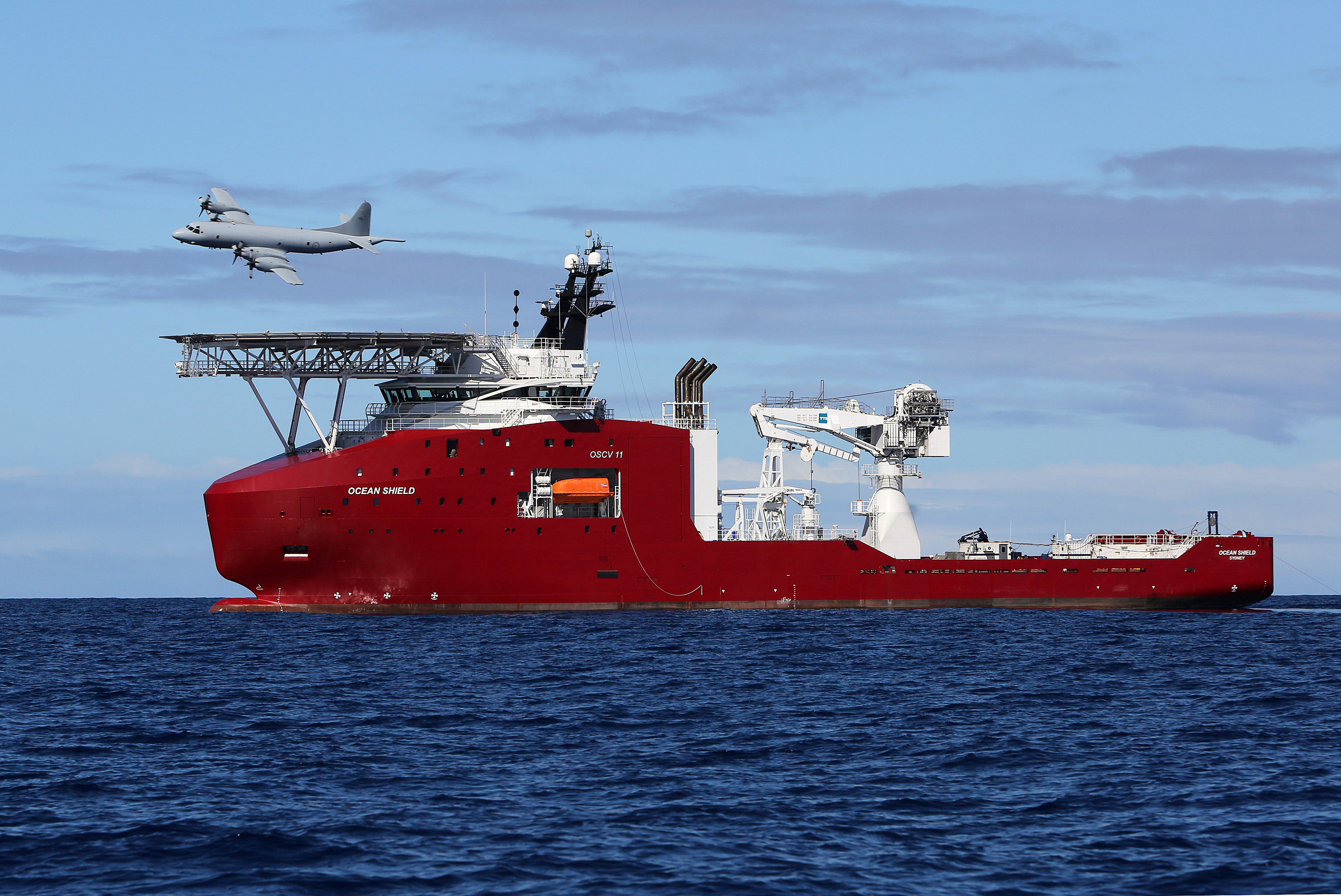 PERTH, Australia -- An Australian aircraft Thursday detected what may be the fifth signal coming from a man-made device deep in the Indian Ocean, adding to hopes that searchers will soon pinpoint the object's location and send down a robotic vehicle to confirm if it is a black box from the missing Malaysian jet.

The Australian air force P-3 Orion, which has been dropping sonar buoys into the water near where four earlier sounds were heard, picked up a "possible signal" that may be from a man-made source, said Angus Houston, who is coordinating the search off Australia's west coast.

"The acoustic data will require further analysis overnight," Houston said in a statement.

If confirmed, the signal would further narrow the hunt for Malaysia Airlines Flight 370, which vanished on March 8 while flying from Kuala Lumpur to Beijing with 239 people aboard.

The Australian ship Ocean Shield picked up two underwater sounds on Tuesday, and two sounds it detected Saturday were determined to be consistent with the pings emitted from a plane's flight recorders, or "black boxes."

CBS News' Seth Doane reports that authorities have been hoping to detect as many of these signals as possible while the missing Boeing 777's black boxes still have some battery life. The batteries are meant to last at least a month after contact with water. Tuesday marked the one-month mark, so the rush to detect pings from the boxes has intensified as any signals being emitted will begin to fade fast.

Doane said as many as 14 aircraft were crisscrossing over the search area Thursday scanning the ocean's surface for any sign of debris.

The Australian air force has been dropping sonar buoys to maximize the sound-detectors operating in a search zone that is now the size of the city of Los Angeles.

Royal Australian Navy Commodore Peter Leavy said each buoy is dangling a hydrophone listening device about 1,000 feet below the surface. Each buoy transmits its data via radio back to the plane.

The underwater search zone is currently a 500-square-mile patch of the ocean floor, and narrowing the area as much as possible is crucial before an unmanned submarine can be sent to create a sonar map of a potential debris field on the seabed.

The Bluefin 21 sub takes six times longer to cover the same area as the pinger locator being towed by the Ocean Shield, and would take six weeks to two months to canvass the current underwater search zone. That's why the acoustic equipment is still being used to get a more precise location, U.S. Navy Capt. Mark Matthews said.

The search for floating debris on the ocean surface was narrowed Thursday to its smallest size yet - 22,300 square miles, or about one-quarter the size it was a few days ago. Fourteen planes and 13 ships were looking for floating debris, about 1,400 miles northwest of Perth.

Crews hunting for debris on the surface have already looked in the area they were crisscrossing on Thursday, but were moving in tighter patterns, now that the search zone has been narrowed to about a quarter the size it was a few days ago, Houston said.

Houston has expressed optimism about the sounds detected earlier in the week, saying on Wednesday that he was hopeful crews would find the aircraft - or what's left of it - in the "not-too-distant future."

Separately, a Malaysian government official told The Associated Press Thursday evening that investigators have concluded the pilot spoke the last words to air traffic control, "Good night, Malaysian three-seven-zero," and that his voice had no signs of duress. A re-examination of the last communication from the cockpit was initiated after authorities last week reversed their initial statement that the co-pilot was speaking different words.

The senior government official spoke on condition of anonymity because he wasn't authorized to speak to the media. The conclusion was first reported by CNN.

Investigators suspect the plane went down in the southern Indian Ocean based on a flight path calculated from its contacts with a satellite and analysis of its speed and fuel capacity, but the content of the flight data and cockpit voice recorders is essential to solving the mysteries of why the plane was lost.

An Australian government briefing document circulated among international agencies involved in the search on Thursday said the acoustic pingers likely would continue to transmit at decreasing strength for up to 10 more days, depending on conditions.

Once there is no hope left of the Ocean Shield hearing more sounds, the Bluefin sub will be deployed.

Complicating matters, however, is the depth of the seafloor in the search area. The pings detected earlier are emanating from 14,763 feet below the surface - which is the deepest the Bluefin can dive.

"It'll be pretty close to its operating limit. It's got a safety margin of error and if they think it's warranted, then they push it a little bit," said Stefan Williams, a professor of marine robotics at Sydney University.

The search coordination center said it was considering options in case a deeper diving sub is needed. But Williams suspects if that happens, the search will be delayed while an underwater vehicle rated to 19,700 feet is dismantled and air freighted from Europe, the U.S. or Japan.

Williams said colleagues at the Woods Hole Oceanographic Institution in Massachusetts had autonomous and remotely operated underwater vehicles that will dive to 36,100 feet, although they might not be equipped for such a search.

Underwater vessels rated to 21,300 feet could search the seabed of more than 90 percent of the world's oceans, Williams said.

Williams said it was unlikely that the wreck had fallen into the narrow Diamantina trench, which is about 19,000 feet deep, since sounds emanating from that depth would probably not have been detected by the pinger locator.