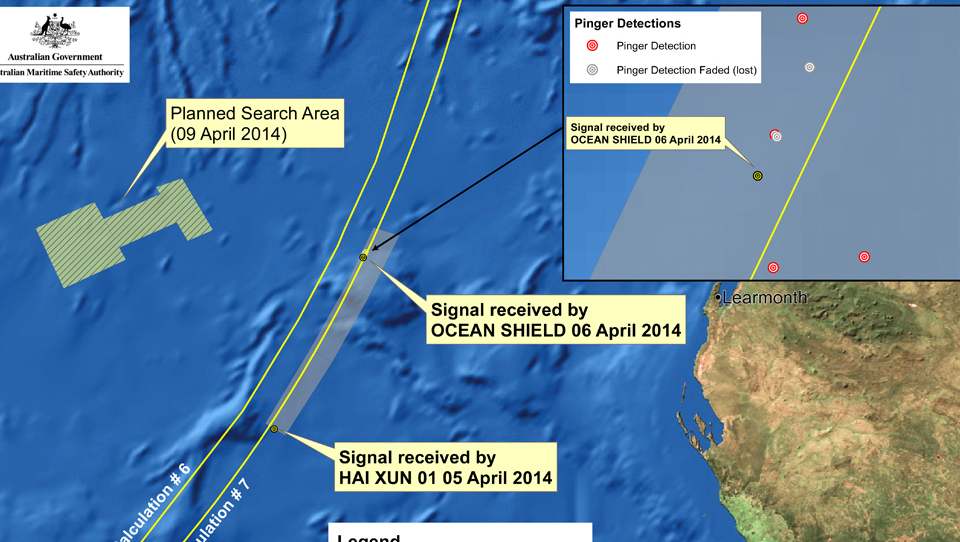 PERTH, Australia -- A ship searching for the missing Malaysian Airlines jet has detected two more underwater signals that may be emanating from the aircraft's black boxes, and the Australian official in charge of the search expressed hope Wednesday that the plane's wreckage will soon be found.

Angus Houston, the head of a joint agency coordinating the search for the missing plane in the southern Indian Ocean, said that the Australian navy's Ocean Shield picked up the two signals in a sweep on Tuesday, and that analysis of two sounds detected in the same area last week showed they were consistent with a plane's so-called black boxes.

"I'm now optimistic that we will find the aircraft, or what is left of the aircraft, in the not too distant future - but we haven't found it yet, because this is a very challenging business," Houston said at a news conference in Perth, the hub for the search operation.

CBS News' Seth Doane reported that, in the words of one search official, if they're searching for a needle in a haystack, they believe that they have now at least found the haystack.

The Ocean Shield first detected underwater sounds on Saturday before losing them, but managed to pick up the signals again on Tuesday, Houston said. The ship is towing a U.S. Navy pinger locator designed to detect signals from a plane's two black boxes - the flight data recorder and cockpit voice recorder.

A data analysis of the signals detected Saturday determined they were stable, distinct and clear sounds that pulsed consistently - indicating they were coming from a plane's black box, Houston said.

"(The analysts) therefore assess that the transmission was not of natural origin and was likely sourced from specific electronic equipment," Houston said. "They believe the signals to be consistent with the specification and description of a flight data recorder."

Despite the promising evidence, Houston warned that he could not yet conclude that searchers had pinpointed Flight 370's crash site.

"I think that we're looking in the right area, but I'm not prepared to say - to confirm - anything until such time as somebody lays eyes on the wreckage," he said.

Two U.S. Navy officers told the Reuters news agency Wednesday that, "while the pings had been found within a 502 square mile area, they were not confident that they represented reoccurences of the same signal."

"I'd say they are separate acoustic events," Reuters quotes U.S. Navy Captain Mark Matthews as saying, pointing out that the pings weren't close together.

"There has been variability in the geographic position, which leads me to be less optimistic than I would be if I could consistently reacquire the signal so that I have a nice, small geographic area to focus the autonomous under water vehicle search on," Matthews told Reuters.

Finding the black boxes quickly is a matter of urgency, because their locator beacons have a battery life of only about a month -- and Tuesday marked exactly one month since the plane vanished. Once the beacons blink off, locating the black boxes in such deep water would be an immensely difficult, if not impossible, task.

Houston also warned Wednesday that the floor of the Indian Ocean in the region in question is covered in a thick layer of silt -- possibly many yards deep -- which can effectively swallow sunken objects up, making the eventual visual search of the ocean floor more challenging.

He acknowledged that they were running out of time, and noted that the signals picked up on Tuesday were weaker and briefer than the ones heard over the weekend -- suggesting that, if they are coming from the plane's black boxes, the batteries are dying. The two signals detected on Saturday lasted two hours and 20 minutes and 13 minutes, respectively; the sounds heard Tuesday lasted just 5 and a half minutes and 7 minutes.

"So we need to, as we say in Australia, 'make hay while the sun shines,"' Houston said.

Picking up the sound again is crucial to narrowing the search area so a small submarine can be deployed to chart a potential debris field on the seafloor, which is about 14,800 feet down. If the autonomous sub was used now with the sparse data collected so far, covering all the potential places from which the pings might have come would take days, if not weeks. It takes the sub six times longer to cover the same area than it does the towed pinger, Houston said.

"The better Ocean Shield can define the area, the easier it will be for the autonomous underwater vehicle to subsequently search for aircraft wreckage," he said.

Houston said a decision had not yet been made on how long searchers would to wait after the final sound was heard before the sub was deployed, saying only that time was "not far away." He smiled but did not reply when asked if the sub would be deployed on Wednesday.

"Hopefully in a matter of days, we will be able to find something on the bottom that might confirm that this is the last resting place of MH370," he said.

Malaysia Airlines Flight 370 vanished March 8 on a trip from Kuala Lumpur, Malaysia, to Beijing with 239 people on board, sparking one of aviation's biggest mysteries. The search has shifted from waters off of Vietnam, to the Strait of Malacca and then to waters in the southern Indian Ocean as data from radar and satellites was further analyzed.

But finding any wreckage in such deep water has proved to be a monumental task. In addition to the depth and remoteness of the area, search crews are also contending with layers of silt on the sea floor that can both hide any possible wreckage and distort the sounds emanating from the black boxes that may be resting there, said Royal Australian Navy commodore Peter Leavy, who is helping to lead the search.

Meanwhile, the search for debris on the ocean surface picked up intensity on Wednesday, with 15 planes and 14 ships scouring a 29,121 square mile area that extends from 1,405 miles northwest of Perth.

The search zone, though still vast, is about a third the size it was just a few days ago, having been narrowed down based on the sounds picked up by Ocean Shield. Officials are hoping to find something from the plane on the ocean surface to confirm the aircraft entered the water in that area.

diverted by someone familiar with the aircraft, but have not ruled out mechanical problems."