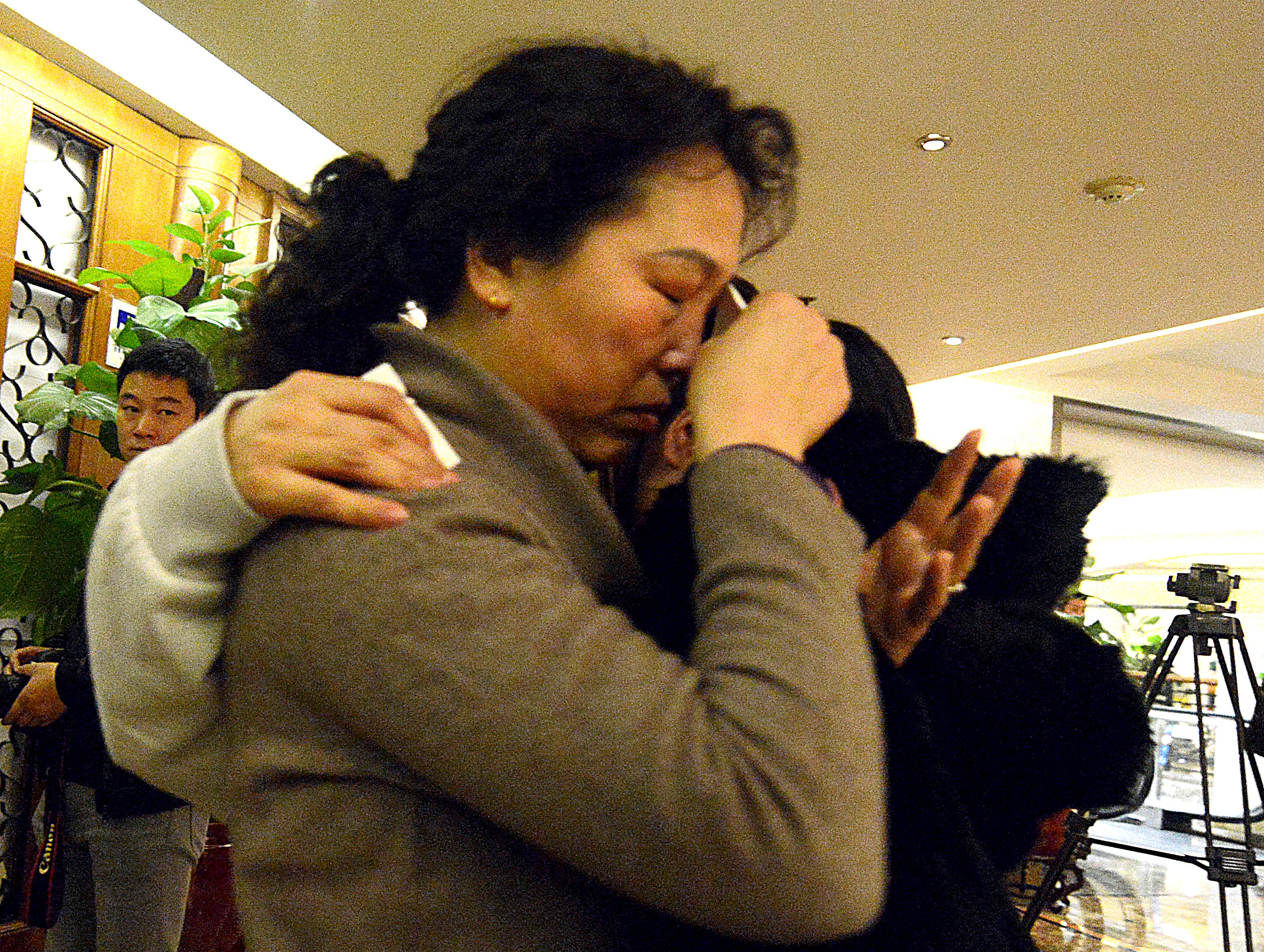 Speaking to the press early Saturday, Prime Minister Najib Razak said the investigation has refocused onto the crew and passengers aboard the missing plane. He added that despite growing evidence to suggest a possible hijacking or sabotage, all possibilities are still being investigated.

The prime minister also said that authorities are now trying to trace the plane across two possible "corridors" -- a northern corridor from northern Thailand through to the border of Kazakstan and Turkmenistan, and a southern corridor from Indonesia to the southern Indian Ocean -- and that search efforts in the South China Sea would be ended.

"Clearly the search for MH370 has entered a new phase," he said.

Earlier, a Malaysian government official who is involved in the investigation said investigators have concluded that one of the pilots or someone else with flying experience hijacked the missing Malaysia Airlines jet.

The official said no motive has been established, and it is not yet clear where the plane was taken. The official spoke on condition of anonymity because he was not authorized to brief the media.

The official said that hijacking was no longer a theory. "It is conclusive."

The Boeing 777's communication with the ground was severed under one hour into a flight March 8 from Kuala Lumpur to Beijing with 239 aboard. Malaysian officials have said radar data suggest it may have turned back and crossed back over the Malaysian peninsula westward, after setting out toward the Chinese capital.

Piracy and pilot suicide have been among the scenarios under study as investigators grew increasingly certain the missing Malaysia Airlines jet reversed course and headed west after its last radio contact with air traffic controllers.

The latest evidence suggests the plane didn't experience a catastrophic incident over the South China Sea as was initially suspected. Some experts had theorized that one of the pilots, or someone else with flying experience, hijacked the plane or committed suicide by plunging the jet into the sea.

A U.S. official said Friday in Washington that investigators were examining the possibility of "human intervention" in the plane's disappearance, adding it may have been "an act of piracy." The official, who wasn't authorized to talk to the media and spoke on condition of anonymity, said it also was possible the plane may have landed somewhere.

The official said key evidence suggesting human intervention was that contact with the Boeing 777's transponder stopped about a dozen minutes before a messaging system on the jet quit. Such a gap would be unlikely in the case of an in-flight catastrophe.

A Malaysian official, who also declined to be identified because he is not authorized to brief the media, said only a skilled aviator could navigate the plane the way it was flown after its last confirmed location over the South China Sea. The official said it had been established with a "more than 50 percent" degree of certainty that military radar had picked up the missing plane after it dropped off civilian radar.

Earlier Malaysia's acting transport minister, Hishammuddin Hussein, had said investigators were still trying to establish with certainty that military radar records of a blip moving west across the Malay Peninsula into the Strait of Malacca showed Flight MH370.

"I will be the most happiest person if we can actually confirm that it is the MH370, then we can move all (search) assets from the South China Sea to the Strait of Malacca," he told reporters. Until then, he said, the international search effort would continue expanding east and west from the plane's last confirmed location.

Two communication systems on Malaysia Airlines Flight 370 were shut down separately in the moments before the flight disappeared from radar on Saturday; a data system and two transponders which relayed information about the jet's speed, altitude and location, CBS News' Bob Orr reported.

While a cascading electrical problem could feasibly cause that kind of staged electrical failure, Orr said it's also entirely possible somebody on the plane intentionally turned off the systems. And investigators say there's further evidence suggesting the jet did not crash immediately after being lost on radar; a transmitter on the plane tried for another four hours to ping satellites. That's an indication to analysts that the jet continued to fly for some time -- possibly as far as 2,500 miles from where it was last detected.

Sources say it is also possible that the plane may have spend some of that time on the ground with its engines still running.

Officials have told CBS News the plane had enough fuel to carry it out to the west into the Indian Ocean, so the search is growing even larger. While they believe it likely crashed in water, it is also possible landed somewhere.

The news agency said investigators believe the missing jet appeared to follow a known air navigational route, based on the radar blips seen by the Malaysian military.

That would have taken the plane into the Andaman Sea and toward the Indian Ocean, and according to Reuters, "could only have been set deliberately, either by flying the Boeing 777-200ER jet manually or by programming the auto-pilot."

Reuters cited another source as saying the official investigation was increasingly focused on the possibility that someone with training as a pilot deliberately diverted the flight.

"What we can say is we are looking at sabotage, with hijack still on the cards," a senior Malaysian police official told Reuters.

The New York Times, quoting American officials and others familiar with the investigation, reported on Friday that the flight altered its course more than once after it lost contact with ground control and that it made significant changes in altitude. The Times said radar signals appear to show the airplane climbing to 45,000 feet and making a sharp turn to the west. That altitude is above the approved limit for a Boeing 777-200.

Then, the Times reported, the plane descended unevenly to an altitude of 23,000 feet, below normal cruising levels, as it approached the island of Penang, where it climbed again and flew northwest toward the Indian Ocean.

Boeing offers a satellite service that can receive a stream of data on how an aircraft is functioning in flight and relay the information to the plane's home base. Malaysia Airlines didn't subscribe to that service, but the plane still had the capability to connect with the satellite and was automatically sending signals, or pings, said the U.S. official, who spoke on condition of anonymity because he wasn't authorized to discuss the situation by name.

The signal, called a "handshake" does not transmit data, but just tells the satellite that the plane is still in the sky. Once an hour for four or five hours, the plane communicated with a satellite, according to a U.S. official speaking on background. Then the communication stopped - the plane either crashed on land or in the water, or it landed somewhere and turned off the engines.

The communications back and forth do not give a specific location for the plane. But they indicate the direction the satellite would have to tilt its antenna to find the plane though not where on that arc the plane would be.

Scores of aircraft and ships from 12 countries are involved in the search, which reaches into the eastern stretches of the South China Sea and on the western side of the Malay Peninsula, northwest into the Andaman Sea and the Indian Ocean.

CBS News national security correspondent David Martin reports that the USS Kidd has been assigned a search area in the Andaman Sea both east and west of the Andaman Islands. The P-8, which was scheduled to fly its first mission Friday tonight, will cover a grid that stretches west to the southern part of the Bay of Bengal.

India said it was using heat sensors on flights over hundreds of Andaman Sea islands Friday and would expand the search for the missing jet farther west into the Bay of Bengal, about 1,000 miles to the west of the plane's last known position.

A team of five U.S. officials with air traffic control and radar expertise - three from the U.S. National Transportation Safety Board and two from the Federal Aviation Administration - has been in Kuala Lumpur since Monday to assist with the investigation.

White House spokesman Jay Carney sidestepped questions Friday about the possibility of human intervention in the plane disappearance, saying only that U.S. officials were assisting in the investigation.

"I don't have conclusive answers and I don't think anyone does," Carney said.

Malaysia has faced accusations it isn't sharing all its information or suspicions about the plane's final movements. It insists it is being open, and says it would be irresponsible to narrow the focus of the search until there is undeniable evidence of the plane's flight path.

At this point, there is no evidence of any wrongdoing on the part of the two pilots, though Malaysian police have said they are looking at their psychological background, their family life and connections.

Zaharie Ahmad Shah, 53, and Fariq Abdul Hamid, 27, have both been described as respectable, community-minded men.

Zaharie joined Malaysia Airlines in 1981 and had more than 18,000 hours of experience. His Facebook page showed an aviation enthusiast who flew remote-controlled aircraft, posting pictures of his collection, which included a lightweight twin-engine helicopter and an amphibious aircraft.

Fariq was contemplating marriage after having just graduated to the cockpit of a Boeing 777. He has drawn the greatest scrutiny after the revelation that in 2011, he and another pilot invited two women boarding their aircraft to sit in the cockpit for a flight from Phuket, Thailand, to Kuala Lumpur.

Mike Glynn, a committee member of the Australian and International Pilots Association, said he considers pilot suicide to be the most likely explanation for the disappearance, as was suspected in a SilkAir crash during a flight from Singapore to Jakarta in 1997 and an EgyptAir flight in 1999.

Glynn said a pilot may have sought to fly the plane into the Indian Ocean to reduce the chances of recovering data recorders, and to conceal the cause of the disaster.

Meanwhile, according to the South China Morning Post, Chinese scientists reported they had detected a small "seismic event" on the sea floor between Vietnam and Malaysia - where the plane was located at the approximate time that it disappeared last Saturday.

However, Paul Caruso of the U.S. Geological Survey told USA Today that it was "unlikely" that a plane crash would be strong enough to produce the reported seismic event.