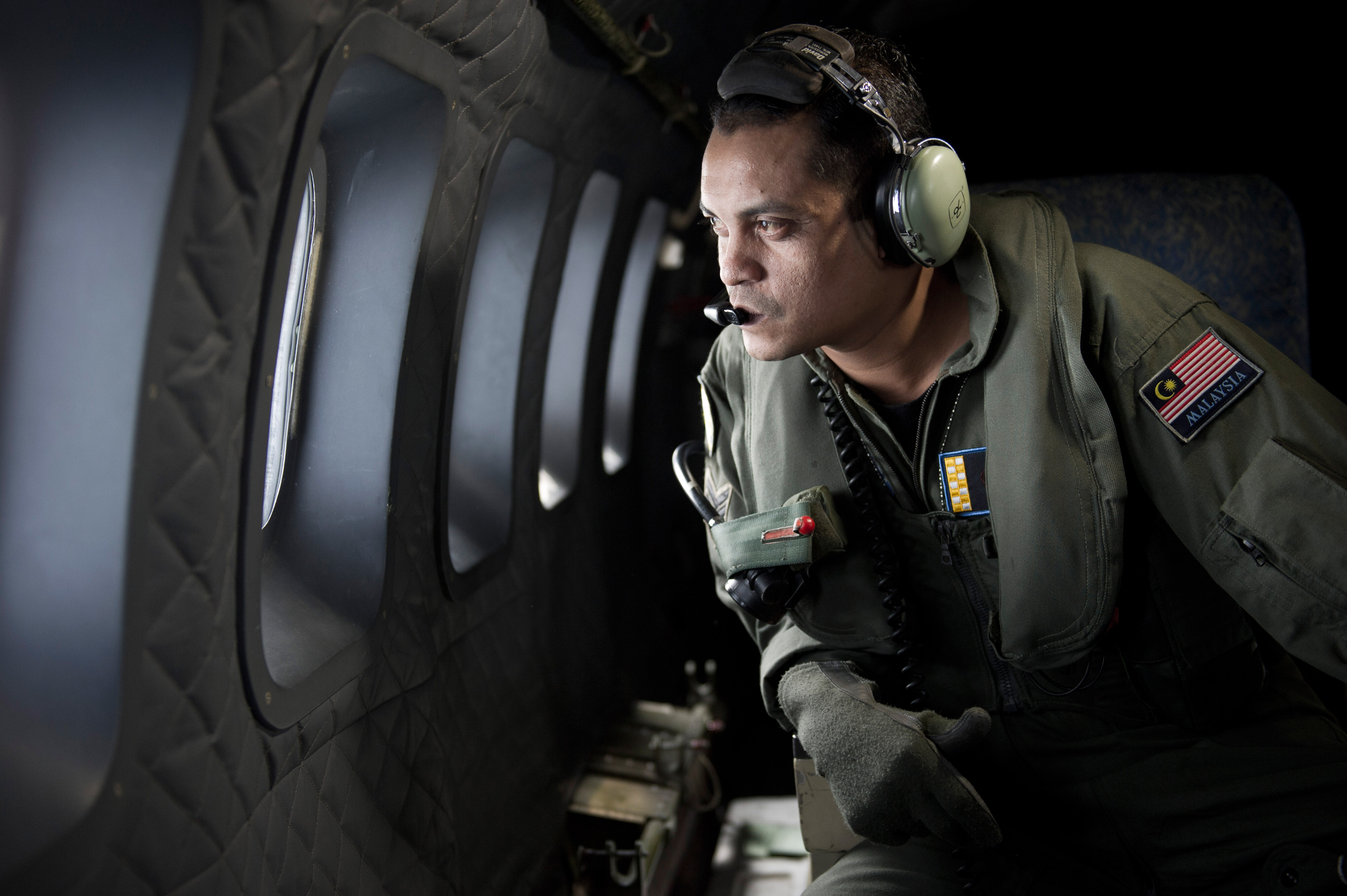 KUALA LUMPUR, Malaysia -- The international search for the missing Malaysian jetliner expanded Friday further into the Indian Ocean amid signs the aircraft may have flown on for hours after its last contact with air-traffic control nearly a week ago, and more indicators suggested the Boeing 777's disappearance could involve criminal action

A U.S. official in Washington said that investigators are examining the possibility of "human intervention" in the plane's disappearance, adding it may have been "an act of piracy." The official, who wasn't authorized to talk to the media and spoke on condition of anonymity, said it also was possible the plane may have landed somewhere.

CBS News' Bob Orr reported that two communication systems on Malaysia Airlines Flight 370 were shut down separately in the moments before the flight disappeared from radar on Saturday; a data system and two transponders which relayed information about the jet's speed, altitude and location.

While a cascading electrical problem could feasibly cause that kind of staged electrical failure, Orr said it's also entirely possible somebody on the plane intentionally turned off the systems. And investigators say there's further evidence suggesting the jet did not crash immediately after being lost on radar; a transmitter on the plane tried for another four hours to ping satellites. That's an indication to analysts that the jet continued to fly for some time -- possibly as far as 2,500 miles from where it was last detected.

Malaysian military radar picked up unidentified blips moving away from the spot and then back across the Malaysian peninsula, toward the Strait of Malacca. Officials now think these blips represented the missing Boeing 777.

Officials have told CBS News the plane had enough fuel to carry it out to the west into the Indian Ocean, so the search is growing even larger. While they believe it likely crashed in water, it's also it possible landed somewhere.

The news agency said investigators believe the missing jet appeared to follow a known air navigational route, based on the radar blips seen by the Malaysian military.

That would have taken the plane into the Andaman Sea and toward the Indian Ocean, and according to Reuters, "could only have been set deliberately, either by flying the Boeing 777-200ER jet manually or by programming the auto-pilot."

Reuters cited another source as saying the official investigation was increasingly focused on the possibility that someone with training as a pilot deliberately diverted the flight.

"What we can say is we are looking at sabotage, with hijack still on the cards," a senior Malaysian police official told Reuters.

As that speculation intensified, police have said they are looking at the psychological background of the pilots, their family life and connections as one line of inquiry into flight MH370's disappearance, but there is no evidence linking them to any wrongdoing.

Some experts believe it is possible that one of the pilots, or someone with flying experience, hijacked the plane for some later purpose or committed suicide by plunging the aircraft into the sea.

Mike Glynn, a committee member of the Australian and International Pilots Association, said he considers pilot suicide to be the most likely explanation for the disappearance, as was suspected in a SilkAir crash during a flight from Singapore to Jakarta in 1997 and an EgyptAir flight in 1999.

Glynn said a pilot may have sought to fly the plane into the Indian Ocean to reduce the chances of recovering data recorders, and to conceal the cause of the disaster..

Meanwhile, according to the South China Morning Post, Chinese scientists reported they had detected a small "seismic event" on the sea floor between Vietnam and Malaysia - where the plane was located at the approximate time that it disappeared.

However, Paul Caruso of the U.S. Geological Survey told USA Today that it was "unlikely" that a plane crash would be strong enough to produce the reported seismic event.

Orr said there has clearly been a ramping-up of American involvement in the investigation, as the Malaysians share more with U.S. aviation analysts who have a special expertise -- particularly in reading radar data.

"Also we have to say here there's a clear American interest on a couple of levels," Orr noted Friday on "CBS This Morning."

"The plane, of course, built by Boeing, and there were Americans on board," explained Orr. "But on top of that, this case could in the end involve crime or terrorism, and that could have future security implications."

Malaysia's Transport Minister Hishammuddin Hussein said Friday the search was expanding further afield -- not because of any new information about the plane's flight, but because the aircraft has not yet been found.

Malaysian officials declined to discuss when -- or even whether -- they had information about signals to satellites, and that they would release details only when verified. Hishammuddin said Malaysian investigators have worked with U.S. colleagues in Kuala Lumpur since Sunday.

"I hope within a couple of days to have something conclusive," he told a press conference.

If the plane had disintegrated during flight or had suffered some other catastrophic failure, all signals -- the pings to the satellite, the data messages and the transponder -- would be expected to stop at the same time. Experts say a pilot or passengers with technical expertise may have switched off the transponder in the hope of flying undetected.

No theory, however, has been ruled out in one of aviation history's most puzzling mysteries.

The Beijing-bound Boeing 777-200 last communicated with air traffic base stations east of Malaysia in the South China Sea, which for several days has the main focus of the search. Planes and ships also have been searching the Strait of Malacca west of Malaysia because of the blip on military radar suggesting the plane might have turned in that direction after the last confirmed contact.

If the plane flew another four hours, it could be much farther away.

Indian ships and planes have been searching northwest of Malaysia in the eastern Andaman Sea, and on Friday expanded their search to areas west of the Andaman and Nicobar Islands chain Friday, said V.S.R. Murty, an Indian Coast Guard inspector-general.

The White House said the U.S. may be drawn into a new phase of the search in the vast Indian Ocean but did not offer details. The U.S. Navy 7th Fleet said it had moved one of its ships, the USS Kidd, into the Strait of Malacca.

Hishamuddin said the search also would be expanded to more remote parts of the South China Sea as well.

However, Vietnam, which has been heavily involved in the search from the start, downgraded its hunt in the South China Sea to regular from emergency on Friday by reducing the frequency of aircraft flights and cruises by ships involved, said Lt. Gen. Vo Van Tuan, deputy chief of staff of Vietnamese People's Army.

Boeing offers a satellite service that can receive a stream of data during flight on how the aircraft is functioning and relay the information to the plane's home base. The idea is to provide information before the plane lands on whether maintenance work or repairs are needed.

Malaysia Airlines didn't subscribe to that service, but the plane still had the capability to connect with the satellite and was automatically sending pings, the official said.

Boeing has not commented.

"It's like when your cellphone is off but it still sends out a little 'I'm here' message to the cellphone network," the official said. "That's how sometimes they can triangulate your position even though you're not calling because the phone every so often sends out a little bleep. That's sort of what this thing was doing."

Hishammuddin said Malaysia was asking for radar data from India and other neighboring countries to see if they can trace it flying northwest. There was no word Friday that any other country had such details on the plane, and they may not exist.

Air Marshal Vinod Patni, a retired Indian air force officer and a defense expert, said radar facilities in the Andaman and Nicobar Islands area don't work around the clock, either. "These are generally switched on and off as and when required. A radar may be kept on for 24 hours on certain days. I won't say that the Indian radars are highly sophisticated in the region," he said.

Patni also said there are gaps in the coverage areas, including within the area being searched for the missing plane. He couldn't give an exact location for specific gaps, but said pilots are well aware of them.

Mike Glynn, a committee member of the Australian and International Pilots Association, said he considers pilot suicide to be the most likely explanation for the disappearance, as was suspected in a SilkAir crash during a flight from Singapore to Jakarta in 1997 and an EgyptAir flight from Los Angeles to Cairo in 1999.

Glynn said a pilot may have sought to fly the plane into the Indian Ocean to reduce the chances of recovering data recorders, and to conceal the cause of the disaster.

Experts said that if the plane crashed into the ocean, some debris should be floating even if most of the jet is submerged. Past experience shows that finding the wreckage can take weeks or even longer, especially if the location of the plane is in doubt.