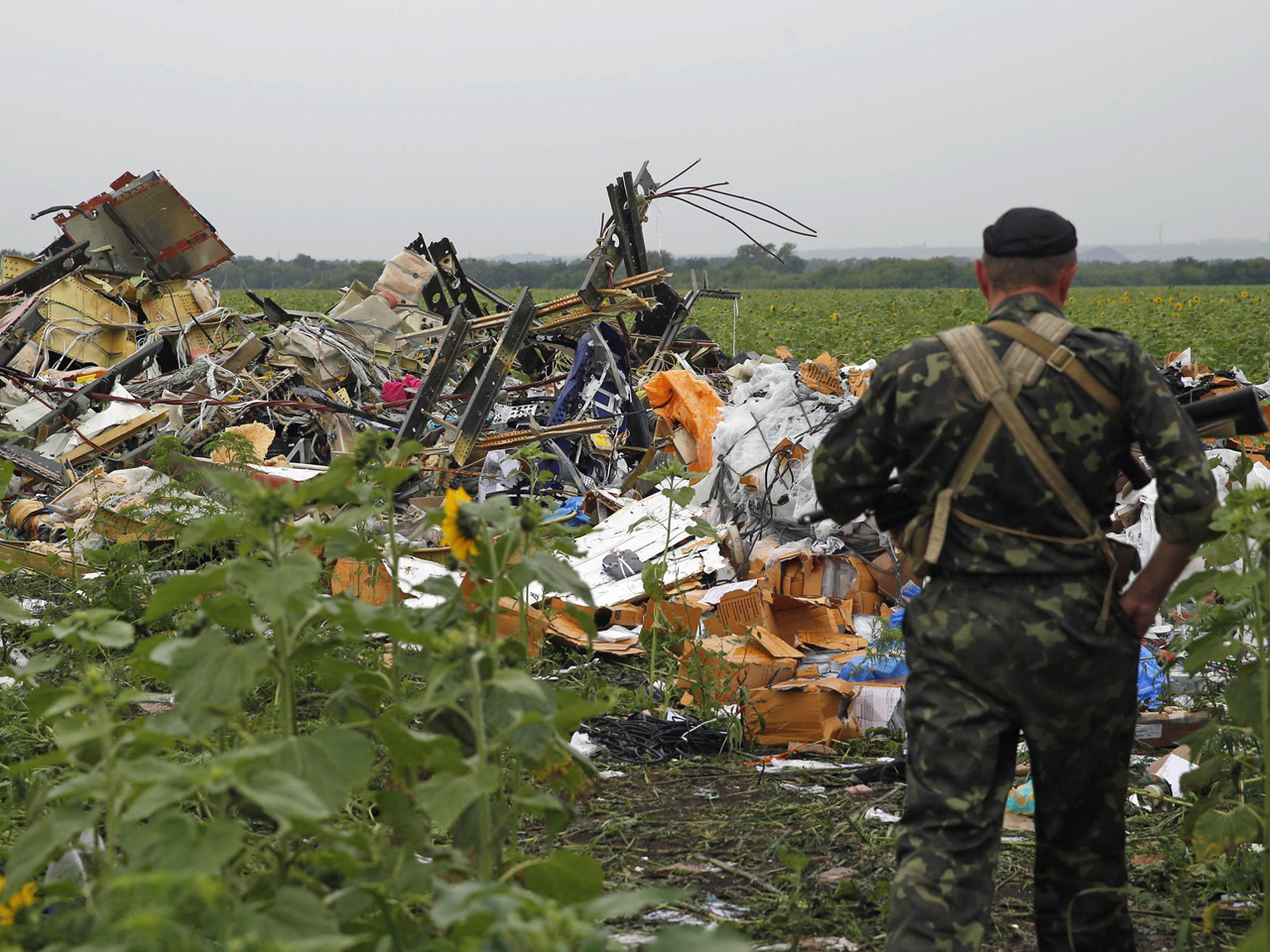 KIEV, Ukraine -- Emergency workers, police officers and even off-duty coal miners -- dressed in overalls and covered in soot -- searched Friday through wreckage and bodies scattered over a vast stretch of farmland after a Malaysian Airlines jet flying over eastern Ukraine was shot from the sky, killing 298 people.

Separatist rebels who control the area where the plane went down said Friday they had recovered "most" of the plane's black boxes and were considering what to do with them, as European officials arrived at the site by helicopter.

An assistant to the Ukrainian insurgency's military commander, Igor Girkin, told the Associated Press Friday on condition of anonymity that eight out of the plane's 12 recording devices had been located. He did not elaborate, and it wasn't clear what recording equipment, beyond the mandated flight recorders, were on the aircraft.

Any investigators would need permission from the rebel leadership before the y could safely film or take photos at the scene. To that end, rebel leader Sergei Kavtaradze, told the Reuters news agency on Friday that the separatists welcomed international observers to investigate the crash scene.

"Today 17 new workers and four official experts from Kiev arrived in Donetsk. Soon they are due to arrive at the site of the tragedy," Kavtaradze told Reuters. "We support the maximum number of experts possible."

Meanwhile, the Organization for Security and Cooperation in Europe (OSCE) said about 30 of its representatives had arrived at the crash site by helicopter. The OSCE has worked in eastern Ukraine for months, sending military observers -- who have on a couple occasions been briefly detained by separatist militias -- and attempting to mediate between the two sides in the conflict.

A representative for the Geneva-based group told Reuters that 30 of it's experts and observers had arrived at the scene, but it wasn't immediately clear in what capacity.

Russian Foreign Minister Sergey Lavrov said Friday that Russia had no intention of taking possession of the plane's black boxes.

"We do not plan to take these (black) boxes. We do not plan to violate existing norms for such situations," Lavrov told Russian television. "We want international experts to get to the site of the crash as soon as possible so that they get the black boxes right away."

Ukraine has called for an international probe to determine who attacked the plane and insisted it was not its military. U.S. intelligence authorities said a surface-to-air missile likely downed the plane, but could not say who fired it.

The U.S. National Transportation Safety Board (NTSB) said Friday that it was sending an investigator to Ukraine to assist in the probe, but the timing was still being worked out. Two U.S. law enforcement officials told CBS News, meanwhile, that a small team from the FBI was also heading for Ukraine to assist, but not as part of any criminal investigation.

Ukraine accused the rebels of shooting down the Malaysia Airways plane. The rebels denied it and accused government forces of the same.

Russian President Vladimir Putin blamed Ukraine for the downing, saying it was responsible for the unrest in its Russian-speaking eastern regions -- but did not accuse Ukraine of shooting the plane down and did not address the key question of whether Russia gave the rebels a missile system capable of shooting down a plane at such high altitude.

On Friday, Russian news agency ITAR-TASS, which has close ties to the Kremlin, said the Defense Ministry had detected radiation from a possible launch at a Ukrainian military air defense missile system on Thursday. Reports on various Russian media outlets sited the Ministry as saying activity was detected at a Buk missile installation.

It appeared to be the first clear attempt by Russian officials to point the blame for the shoot-down squarely at Ukraine's own military.

Speaking in Kuala Lumpur on Friday morning, Malaysian officials said it was "imperative to maintain the integrity" of the crash site, and added that if the jet was shot down, it would constitute an "outrage against human decency."

According to CBS News Transportation and Safety Analyst Mark Rosenker, a former chairman of the National Transportation Safety Board, the crash site is already "contaminated" from an investigator's perspective.

"It's absolutely horrible," said Rosenker. "Parts could be missing."

Rosenker said it is critical that local authorities secure a crash site until crash investigators arrive, but that clearly hasn't happened in the battleground that is eastern Ukraine.

The most important piece of evidence investigators need is the plane's flight data recorder, or "black box," which records conversations in the cockpit and the flight data, but investigators will also need critical parts of the aircraft including the nose, tail and wings.

Those parts will be necessary to determine where exactly the plane was struck by the missile that brought it down, and any explosive residue left on the pieces will provide evidence about what type of missile it was.

Furthermore, the bodies of the passengers need to be examined to determine how exactly they died.

The black box is the most critical element to recover, Rosenker said. Although it is built to withstand heat and force, once the box is opened it becomes "a very delicate instrument that needs to be carefully handled through expert analysis."

For the first day in months, there was no sign of fighting in the area, though there was no official word of a cease-fire. But access to the area remained difficult and dangerous. The road from Donetsk, the largest city in the region, to the crash site was marked by five rebel checkpoints running document checks.

The crash site was sprawling. Large chunks of the Boeing 777 that bore the airline's red, white and blue markings lay strewn over a field. The cockpit and one turbine lay a half-mile apart, and residents said the tail landed another six miles away, indicating the aircraft most likely broke up before hitting the ground.

Bodies and body parts were everywhere: in a sunflower field, even in the streets of the rebel-held village of Rozsypne, 25 miles from the Russian border.

The area has seen heavy fighting between government troops and pro-Russia separatists, and rebels had bragged about shooting down two Ukrainian military jets in the region just a day earlier.

CBS News correspondent Margaret Brennan reported that at the top of the list of Russian companies sanctioned by the Obama administration for their alleged support of the Ukrainian rebels, were makers of surface-to-air missiles like the Buk system that Ukraine's government and U.S. intelligence officials believe was likely used to down Malaysia Airlines flight 17.

Ukraine and the West have accused Russia of supporting the rebels, a charge that Moscow denies.

The government of Ukraine said in a statement Thursday afternoon that it had evidence the pro-Russian militants downed the plane.

Ukraine's security services produced what they said were two intercepted telephone conversations proving rebels were responsible, and one allegedly showing a link to Russian intelligence.

In the first call, a man identified as rebel commander Igor Bezler tells a second person, identified by the Ukrainian government as a Russian military intelligence officer, that rebel forces shot down a plane. In the second, two rebels -- one of them seemingly at the scene of the crash -- say the rocket attack was carried out by a unit of insurgents about 15 miles north of the crash site.

But CBS News correspondent Mark Phillips notes the conversations cannot be verified, and it's not clear which plane is being referred to; at least two other Ukranian military planes have been shot down in the area this week.

Meanwhile, rebel leader Igor Girkin (also known as Igor Strelkov) apparently deleted a statement online saying his "militia" had just downed an aircraft, thinking it was an Antonov AN-26 military plane. CBS News obtained a cached version of the post, in which he said Ukraine was warned not to "fly in our skies."

Poroshenko called the attack an "act of terrorism" and demanded an international investigation.