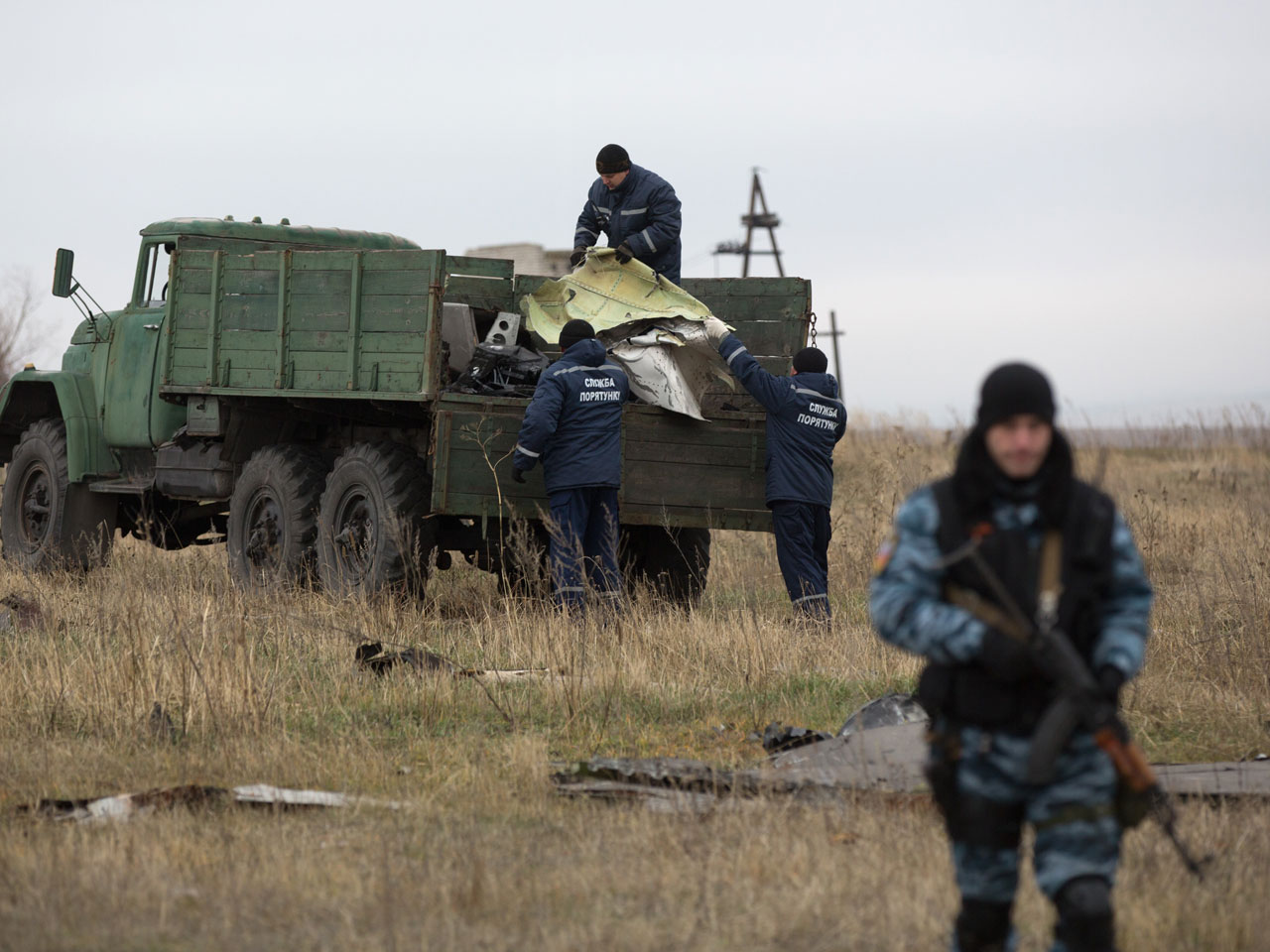 HRABOVE, Ukraine - Workers in rebel-controlled eastern Ukraine began to collect debris from the crash site of Malaysia Airlines Flight 17 on Sunday, four months after the plane was brought down.

The operation is being carried out under the supervision of Dutch investigators and officials from the Organization for Security and Cooperation in Europe. The recovered fragments are to be loaded onto trains and taken to the government-controlled eastern Ukrainian city of Kharkiv. The investigation into the cause of the crash is being conducted there and in the Netherlands.

Alexander Kostrubitsky, the head of the emergency services in the rebel-held areas of Donetsk region, said at the site that gathering debris could take around 10 days. The debris is being sawn into smaller pieces to facilitate its transportation, Kostrubitsky said.

All 298 people aboard the Boeing 777 flying from Amsterdam to Kuala Lumpur were killed when it was shot down July 17 over a rebel-held area. Charred remains of the aircraft are scattered around fields over an area of 8 square miles.

The first batch of plane debris was delivered from an area near the village of Hrabove to a lumber warehouse in the town of Torez shortly after lunchtime Sunday. They were due to be put onto cargo trains later in the day.

Efforts to conduct investigations and recovery operations have been delayed amid continued fighting between government troops and separatist fighters. A truce was agreed in September, but hostilities have raged on nonetheless.

Ukraine and the West have blamed the downing of the MH17 flight on Russia-backed separatists using a ground-to-air missile.

Russian state television has released a satellite photograph it claims shows that a Ukrainian fighter jet shot down Malaysia Airlines Flight 17. But the U.S. government dismissed the report as preposterous and online commentators called the photo a crude fake.

The photo released Friday by Russia's Channel One and Rossiya TV stations purportedly shows a Ukrainian fighter plane firing an air-to-air missile in the direction of the MH17. The channels said they got the photo from a Moscow-based organization, which had received it via email from a man who identified himself as an aviation expert.

Several bloggers said the photograph was a forgery, citing a cloud pattern to prove the photo dates back to 2012, and several other details that seem incongruous.

Some saw the photo as a propaganda effort intended to deflect criticism over the tragedy that Russian President Vladimir Putin faced as he attended the Group of 20 summit in Brisbane, Australia.

Putin was the first leader to depart the summit Sunday. He told reporters that he left ahead of a final leaders' lunch because he wanted to rest before returning to work.

Amateur footage, filmed by a resident of Hrabove and obtained by the Associated Press, shows people reacting in alarm as wreckage blazes only a few meters away from their homes on the afternoon of July 17. The video is perhaps the first taken immediately after the plane came down and suggests that residents first assumed it was a Ukrainian military plane that had been struck.

In the video obtained on Sunday, residents of the village of Hrabove can be heard asking about the whereabouts of the pilot. This is significant because multiple Ukrainian military planes had been shot down by this time, and their pilots and crew regularly taken prisoner by rebel forces.

The U.S., Australia and Japan issued a statement condemning Russia for its actions in Ukraine, and Canadian Prime Minister Stephen Harper reacted to an offer of a handshake from Putin by responding, "I guess I'll shake your hand, but I have only one thing to say to you: You need to get out of Ukraine."

Australian Prime Minister Tony Abbott has been particularly strong-worded in his criticism of Russia since the Malaysia Airlines plane was shot down. There were 38 Australian citizens and residents on the plane when it was downed.

Abbott said he and Putin had engaged in a "very robust" discussion about the situation in Ukraine.

"I utterly deplore what seems to be happening in eastern Ukraine," Abbott said. "I demand that Russia fully cooperate with the investigation, the criminal investigation of the downing of MH17, one of the most terrible atrocities of recent times."

Dutch authorities said in late October that 289 victims of the crash had been identified. They said work on concluding the identification process was hampered by lack of usable DNA profiles and because not all remains had been collected from the crash site.

At the wreckage site, Kostrubitsky said more bone fragments were discovered Sunday after part of the plane was lifted away.

Investigators revealed in October that the body of one passenger of Malaysia Airlines Flight 17 was found wearing an oxygen mask, raising questions about how much those on board knew about their fate when the plane plunged out of the sky above Eastern Ukraine in July.

The passenger, an Australian, did not have the mask on his face, but its elastic strap was around his neck, said Wim de Bruin, a spokesman for the Dutch National Prosecutor's Office which is carrying out a criminal investigation into the air disaster.

Dutch air crash investigators said last month it was likely struck by multiple "high-energy objects from outside the aircraft," which some aviation experts say is consistent with a strike by a missile.

The head of the criminal investigation said the most likely of possible scenarios being investigated is that the Boeing 777 was shot down from the ground.