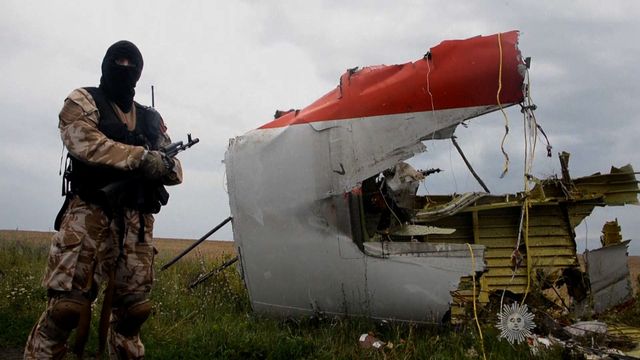 THE HAGUE, Netherlands -- The Dutch team investigating the downing of Malaysia Airlines Flight 17 over Eastern Ukraine says the crash was likely caused by the plane being hit by multiple "high-energy objects from outside the aircraft."

"The pattern of wreckage on the ground suggests that the aircraft split into pieces during flight (an in-flight break up)," concluded the investigators.

The preliminary report published Tuesday by the Dutch Safety Board stopped short of saying the Boeing 777 was shot down by a surface-to-air missile, but its findings appear to point to that conclusion.

There were multiple punctures in the cockpit and front section of the fuselage, it said - damage that could be caused by a missile that detonates in front of its target and peppers it with small chunks of metal.

While it was the first official confirmation from investigators about the nature of the suspected mid-air impact suffered by the jet, CBS News' Mark Phillips first reported weeks ago that the fuselage showed clear markings indicating penetration from outside the plane by innumerable small objects -- strongly bolstering the notion of an attack with a sophisticated surface-to-air missile (SAM).

The Boeing 777 was blown out of the sky July 17 over rebel-held territory in eastern Ukraine, killing all 298 passengers and crew on board.

The United States government has concluded unofficially that a SAM -- probably a Russian-made "BUK," or SA11 missile -- brought the jet down, likely fired by pro-Russian rebels fighting government forces in eastern Ukraine.

U.S. intelligence agencies believe the pro-Russian separatists might have downed Flight 17 believing it was a Ukrainian military aircraft.

Although the report drew no conclusions about responsibility, U.S. State Department spokeswoman Marie Harf said the findings were consistent with "our original assessment, that it was likely shot down by one of these surface-to-air missiles fired from separatist-controlled territory in eastern Ukraine."

"I'm unaware of other objects or ways that it could be brought down that are consistent with that finding," Harf said of the report. "It highlights questions for which Russia must still answer."

Governments whose citizens died on Flight 17 were left in little doubt about what happened.

"The findings are consistent with the government's statement that MH17 was shot down by a large surface-to-air missile," Australian Prime Minister Tony Abbott said in a statement.

Christopher Yates, an aviation safety specialist at Yates Consulting, told The Associated Press the report "is extremely consistent with damage from a missile for the simple reason there are penetration marks.

"It must have been moving at very high velocity to create the damage," he said. "It could only be a missile of the type that would reach the altitude that would have struck the aircraft - potentially a BUK missile."

The Dutch report came a day after the BBC's "Panorama" show cited residents who said they saw a BUK M-1 missile being offloaded in a town in eastern Ukraine, near the place seen in photos released by the Ukrainian army that showed a BUK launcher heading east. They said that the crew handling it had Russian accents.

The report added to a growing body of evidence that pro-Russian rebels were involved.

Just three hours before the plane was shot down above rebel-held territory in eastern Ukraine, the AP reported on the passage of a BUK M-1 missile system - a machine the size of a tank bearing four ground-to-air missiles - through the rebel-held town of Snizhne near the crash site.

A highly placed rebel officer told the AP in an interview after the disaster that the plane was shot down by a mixed team of rebels and Russian military personnel who believed they were targeting a Ukrainian military plane. Intercepted phone conversations between the rebels released by the Ukrainian government support that version of events.

In those tapes, the first rebels to reach the scene can be heard swearing when they see the number of bodies and the insignia of Malaysia Airlines.

Nearly two months later, those insignia and other poignant reminders of the 298 lost lives are still scattered around the crash site.