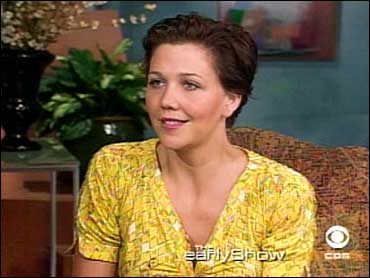 Since her breakthrough award-winning performance in 2002's "Secretary," Maggie Gyllenhaal has quickly emerged into a highly respected actress.

In her latest film, "Criminal," a remake of the Argentine film, "Nueve Reinas" (Nine Queens), she plays Valerie, the sister of a con artist, who has been attempting to swindle her.

"She is very different than me," Gyllenhaal says. "She is the girl in the con. She is always acting, trying to be someone she isn't. She is the standard femme fatale role from the old-fashioned con movies, wearing the red lipstick, but she really isn't a bad girl. She is motivated by her brother, who has taken advantage of her."

Her character Valerie can barely stand to be in the same room with her brother Richard, played by John C. Reilly, she tells co-anchor Rene Syler.

"It's gotten to the point where, I guess, they both feel they have to shock each other into having any kind of interaction that means anything. What I guess we're both doing in the movie is trying to get the other to pay some attention to what each of us needs as siblings."

In the film, Richard has been trying to steal their mother's estate from her and their younger brother Michael. So when Richard needs Valerie's help, she has the perfect opportunity to turn the tables on him and force him tell Michael, the brother he loves, the truth.

Behind The Scenes On 'Without A Trace'

Careerwise, Gyllenhaal says she loves to do independent films. "When you can make a movie for $2 million as opposed to $80 million, you have more freedom," she tells Syler. "You can say things that are a little riskier or a little more challenging. But, you know, I'm interested in doing any kind of movie that excites me, or moves me, or pushes me in some way."

Asked if there is any sibling rivalry with brother Jake, who is also an actor, she says, "I think we've realized, at this point, that it really behooves us to support each other. And I think we both feel excited when the other one does well. I adore my brother. My brother is one of my best friends and so at this point, it's like we're old enough that rivalry seems kind of a waste of time."

Produced by Steven Soderberg and George Clooney, the film opens in limited release on Friday, Sept. 10.