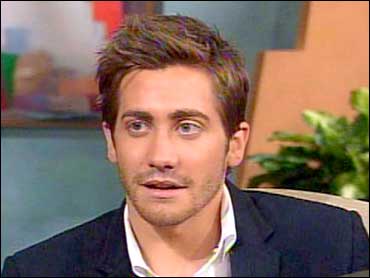 Actor Jake Gyllenhaal has built a career on the critical raves he's received for small films such as "October Sky," "Moonlight Mile" and "The Good Girl." The entire budget for those films probably wouldn't cover the catering bill for his first summer blockbuster, the big-budget disaster film "The Day After Tomorrow."

The actor plays the son of a climatologist (Dennis Quaid) who is trapped in New York City as a new Ice Age descends on the planet.

Gyllenhaal stopped by The Early Show's studio on Monday to discuss his role in the disaster film.

For an actor who may see a lot more screen time in his career, some may think it strange that Gyllenhaal is reluctant to watch himself on film.

"It's always awkward," says Gyllenhaal. "There's something weird, like having been somewhere, having captured it, then watching it again."

The star of "The Day After Tomorrow," which made about $70 million this past weekend, also says he doesn't like to make mindless movies.

Gyllenhaal has noted in the past that most films that make huge amount of money aren't remembered years later.

"I'm not interested in making films that no one remembers," Gyllenhaal says.

"The Day After Tomorrow," the actor's first big budget movie, does has a story that isn't pointless.

"It's kind of ridiculous that [people] would expect most movies that come out during the summer not to have any point," says Gyllenhaal. "It's a story about a family, a father and son, a father neglecting his son, in the same way sort of humanity neglects the environment. The results are not the same. But I guess in metaphor, they kind of are.

"It's about them coming back together and rekindling their relationship and starting it all again."

Some Facts About Jake Gyllenhaal: