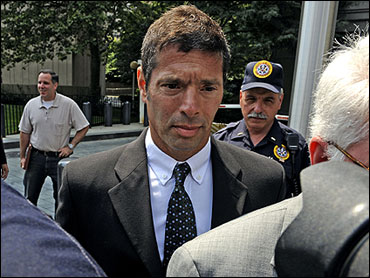 Prosecutors said in a letter to U.S. District Judge Alvin K. Hellerstein that accountant David Friehling was expected to plead guilty at a conference on Tuesday.

In the letter, signed by Assistant U.S. Attorney Lisa A. Baroni, prosecutors said they wanted to notify the court so that it could provide notice to victims of Madoff's multi-billion-dollar fraud that the plea hearing will take place.

They said Friehling will enter the plea to revised charges that accuse him of securities fraud, investment adviser fraud, making false filings with the Securities and Exchange Commission and obstructing or impeding the administration of the Internal Revenue laws.

The charges carry a potential prison term of up to 108 years in prison, though substantial cooperation with prosecutors can result in leniency.

Friehling's lawyer, Andrew McCutcheon Lankler, said: "We don't have a comment. We've never commented on this case and we're not about to start now."

Friehling, 49, was Madoff's auditor from 1991 to 2008, roughly the amount of time that Madoff admitted he carried out his fraud when he pleaded guilty to fraud charges in March. The 71-year-old Madoff is serving a 150-year sentence at a prison in North Carolina.

Despite the more than $65 billion in private investments that Madoff claimed he oversaw for thousands of investors, Friehling seemed to be a small-time auditor with a tiny office in suburban New City, N.Y. Authorities say he appeared to have rubber stamped Madoff's records.

Authorities say if Friehling had done his job, they would have known years earlier that Madoff was carrying out history's greatest Ponzi scheme by paying money to some investors with the proceeds he received from other investors.

When Madoff revealed his fraud last December in a confession to his sons and later to the FBI, it was discovered that only a few hundred million dollars was left of the more than $170 billion that prosecutors say went through his accounts over the years. Prosecutors say investors originally entrusted Madoff with more than $13 billion and he greatly exaggerated bogus gains.

Friehling remains free on bail. He would be the third person to plead guilty in the case.

Earlier this week, a federal judge in Manhattan continued to deny bail for Frank DiPascali, Madoff's former finance chief who is cooperating after pleading guilty in August to helping Madoff carry out his fraud.

On Wednesday, Securities Investors Protection Corp announced Madoff's victims have so far - a record for the securities industry group, but only a fraction of what they lost in the epic swindle.

During the same conference call to announce the repayment, court-appointed trustee Irving Picard said he had identified $21.2 billion losses in about 2,300 customer accounts. He also said he had approved $4.4 billion in claims, and located about $1.5 billion in assets that will help cover a portion of them.

The trustee has sued Madoff's family members and wealthy associates in bankruptcy court in Manhattan, claiming they made off with billions of dollars that should be returned to his clients. Among the defendants was Jeffry Picower, who after having a heart attack.

A complaint filed in May accused Picower - a Florida philanthropist and friend of Madoff for decades - of being the biggest beneficiary of the fraud. It said he made $7 million through "implausibly high purported returns" - an allegation he had denied.

Picower's death "is certainly tragic," the trustee said. "No one would have expected it. Having said that, we will continue with the litigation."

Earlier this month, a came out through court papers. Joseph Cotchett, a California-based lawyer representing about a dozen victims interviewed the former money manager in July at the Butner Federal Correctional Complex near Raleigh, N.C.

The lawyer found the mastermind of one of history's largest financial frauds now reduced to nighttime walks around a prison track for fun, according to a filing containing details of Madoff's new life.

The lawsuit filed by Cotchett also alleged Madoff ran an office rife with cocaine use and sexual escapades.