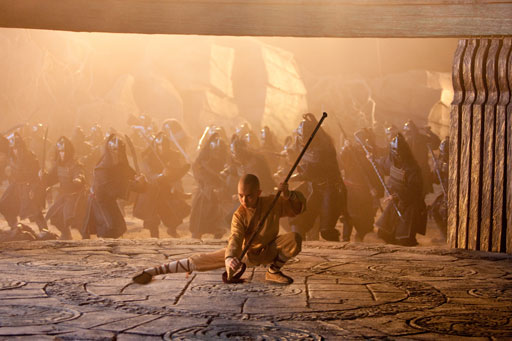 NEW YORK (CBS) In the interest of full disclosure, let me begin by saying that I have never been a big fan of anime and have never watched the original Nickolodeon series called "Avatar: The Last Airbender" on which this M. Night Shyamalan ("The Sixth Sense," "Signs") adaptation is based.

Frankly, walking into the theater I didn't quite know what to expect from this two-time Oscar-nominated film director, whose last few films have been more misses than hits.

What I saw visually impressed me. On an IMAX screen, the film looks epic in scope. The eye travels over imagery that is breathtaking and special effects that are first rate, helping give the illusion that the characters actually can control and manipulate the elements. I watched the film in 3-D, but the few moments of thrill were not much of a 3D selling point. The 2-D version will still have the larger-than-life feel of the "upgraded" version.

The story revolves around Book One of the "Avatar" series and opens with young waterbender Katara (Nicola Peltz) out with her older brother Sokka (Jackson Rathbone) practicing her skills, when they discover a young boy named Aang (Noah Ringer). (Watch this week's 'Showbuzz' to see what prompted Shyamalan to take on the project.)

It becomes apparent early on that Aang is not just the last airbender from his nation, but is an Avatar - the prophesized one who alone is able to control all the elements. Missing for 100 years, he returns to discover that for almost a century the Fire Nation has waged a global war against its fellow tribal nations of Water, Air and Earth, subduing them against their will. Only a select handful have the ability to defend their nations- in other words to "bend" the element for which their nation is named.

The Fire Nation, led by Fire Lord Ozai (Cliff Curtis) and his henchman Commander Zhou (Aasif Mandvi), already have killed every airbender, including Aang's mentors, and are now out to destroy the Water Nation. Adding fuel to the fiery storyline, the Fire Lord's son, Prince Zukko (Dev Patel), has been cast out by his father and is desperately trying to win back his father's respect and renew his honor.

The plot moves quickly, changing quickly from storyline to storyline and making the film seem choppy. One can just see the director trying to cram all the source material on screen to appease fans, with one eye on keeping the franchise going for the future. The result is that there is little time to develop any character except Zukko, whom we immediately believe is not the incapable, wimpy prince we are told he is.

Patel's acting is emotional and he lets Zukko's vulnerabilities come through.. Another character-driven moment emerges when Sokka must say goodbye to Princess Yue (Seychelle Gabriel). In the short time we see them on screen together, they make an impact as a believable, albeit unlikely couple.

There has been some criticism of Night's decision to use Caucasians in the lead roles, even though the series alludes to them being Asian. In particular the question has been raised as to why a Caucasian who resembles an Asian was cast to play Aang. This said, Noah Ringer does a good job exuding a zen-like quality. Years of martial arts training serve him well here. He does an able job portraying his youth and innocence and the discomfort he experiences as he confronts his destiny as the Avatar.

In a film that is by his own description "two and a half times" bigger in scope than anything he's done before, it is, uncharacteristically, the action pieces that provide the most entertainment. The 'bending' scenes are captivating and a highlight of the entire film.

The climax, gigantic in its vision, is a spectacle to behold, even if the passion and fear are edged out by presence of so few casualties in a war that is supposed to be monumental in scale. Most surprising, is the lack of suspense we have come to expect from Shyamalan.

In his defense, 'Airbender' was never meant to be a thriller and he had the huge task of having to stay as faithful to the original storyline as possible. But still, some of the moviemaking elements we have come to associate with him are left on the sidelines.

Is the film a serious summer blockbuster? Yes. Is there a thought-provoking, clever story plot we have come to expect from Night? No.

Let's hope if there is a sequel, he manages to meld the two and take control of all the elements.