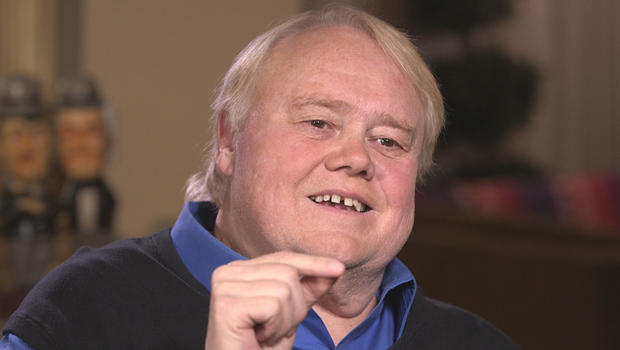 Comic Louie Anderson is helping us kick off a new summer series we call LEAVE 'EM LAUGHING. And as Lee Cowan discovered, one of the keys to Anderson's success is his ability to laugh at himself:

There's one thing comedian Louie Anderson always sets straight from the get-go: he knows he's overweight, he knows you're probably going to laugh about it, and so, he cracks the jokes before you do.

"One day I was folding my underwear and held 'em up to fold 'em, and I went, 'Oh my God, these are big.' I had no idea 'cause when you're putting 'em on you're not thinking These are big underwear. But when they're out in front of you and they block the sun...! I was shocked at how big my underwear was! So, I just quit wearing underwear! No, I'm kidding!"

He's been poking fun at his weight ever since his debut on "The Tonight Show with Johnny Carson" way back in 1984:

"As much as you were doing those fat jokes, and as much as you wanted people to laugh at them, it hurt a little bit, too, that they did laugh," Cowan said.

The laughs have always come before his personal pain – and there has been a lot of it.

Anderson grew up the 10th of eleven children in a housing project in St. Paul, Minnesota – a sweet-and-sour stew, he calls it. His mom was sweet; his dad, an abusive alcoholic, was sour.

He makes fun of that, too:

Anderson said, "I don't do this just for the laughs. No way."

"I think it's healing. But more than that, people don't feel so alone. If people know that I had, you know, my butt kicked and my dad was cruel to me, if they know that I did, and I'm still going, maybe they can keep going."

His humor wasn't only revealing, it was also clean. Mining his own family for material was always his secret, and yet, he says, it's his current role that hits the closest to home.

Anderson plays Zach Galifianakis' mother on the FX series "Baskets." This is no joke, he says; he takes the part of Christine Baskets very seriously.

As he entered his trailer he told Cowan, "Alright, this is the last time you'll see Louie Anderson. I'm leaving him in here."

We followed him into that make-up trailer, and for the next two hours, watched Louie Anderson transform from the self-deprecating gap-toothed comic most of know, to a not-so-bad-looking middle-aged woman that, he says, he recognized right away.

"It's amazing – cheeks and everything, exactly the same," he said, pointing to a photo of his mom, Ora Zella Anderson.

Cowan said, "You're definitely her son."

Ora passed away nearly three decades ago, and yet for the last three seasons, Louie Anderson says he's been channeling her.

Once in costume, he prefers no one call him "Louie" on set. He's pretty convincing as a mollycoddling mom – even in person, when you know it's him, and he/she straightens out Cowan's jacket collar for him (thank you, ma'am).

"I want you to forget that Louie Anderson is playing Christine Baskets," Louie said.

"People say what do you want to do next? I go, 'I just hope I can play a man again!'" he laughed.

It was Galifianakis, one of the show's co-creators, who cast Anderson as his mom and put him in dress. "You know, it's hard to have your own show and not be the most popular one, but I'm fine with it!" Galifianakis laughed. "You know, I like it actually!"

The loveable, fallible, and always motherly Christine Baskets was a hit.

Anderson took home a Prime Time Emmy for the first season, and was nominated for a second one last year.

He has no other way to explain his success in the role other than, he believes, his long-suffering mom must be right there with him.  "That character, you know, I get to steal all her nuance and all those little looks and (huffs) her disapproving stuff."

"She's back in a lot of ways, right?" Cowan asked.

"You know, she's got the starring role that she deserves."

"Played by none other than her son!"

"Yeah, I mean, you know the great thing about my mom was she protected us. She took all the brunt, and this is such a great repay, and tribute. I get to pay her back."

He just finished writing his late mom a series of letters that he's compiled into a book, "Hey Mom" (Simon & Schuster), recounting all she's missed since she passed – and how her spirit is still making a difference.

"It's her humanity and her love that I think people are connecting to," he said.

His mom however, wouldn't want him to give up his standup, he says. That explains why we found him backstage at a comedy club going over index cards full of brand-new material – jokes that Louie Anderson still makes at no one's expense but his.

"Do you know what I really would love? If they completely forgot their troubles for one second, completely. No matter what or how big the trouble was, if they could just forget it for one second, that would be worth it."