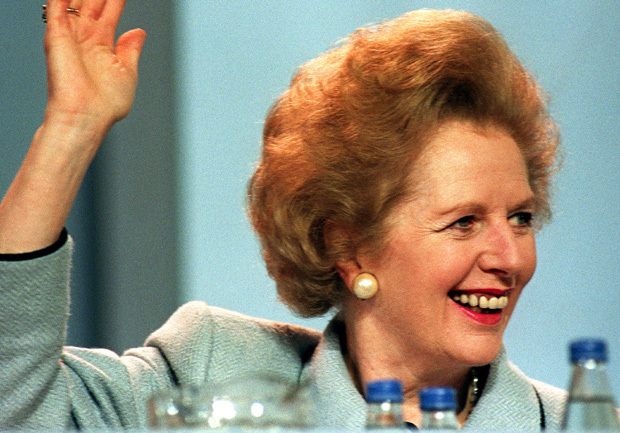 Britons will have the opportunity to bid farewell to Margaret Thatcher in London next week.

Flags at Buckingham Palace, Parliament and across the United Kingdom were lowered to half-staff, and Buckingham Palace said Queen Elizabeth II would send a private message of sympathy to the Thatcher family.

For admirers, Thatcher was a savior who rescued Britain from ruin and laid the groundwork for an extraordinary economic renaissance. For critics, she was a heartless tyrant who ushered in an era of greed that kicked the weak out onto the streets and let the rich become filthy rich.

"Let us not kid ourselves. She was a very divisive figure," said Bernard Ingham, Thatcher's press secretary for her entire term. "She was a real toughie. She was a patriot with a great love for this country, and she raised the standing of Britain abroad."

Prime Minister David Cameron cut short his trip to Spain and canceled a visit to France to return to London for the funeral preparations.

"As our first woman prime minister, Margaret Thatcher succeeded against all the odds," Cameron said in Madrid.

"The real thing about Margaret Thatcher is that she didn't just lead our country. She saved our country," Cameron said, "and I believe she'll go down as the greatest British peacetime prime minister."

Former Prime Minister Tony Blair, who ousted the Conservative Party from power seven years after Thatcher's resignation, conceded that Thatcher had been right to challenge labor union power -- the traditional bedrock for Blair's own Labour Party.

"Very few leaders get to change not only the political landscape of their country but of the world. Margaret was such a leader. Her global impact was vast," said Blair, who credited Thatcher with being "immensely supportive" despite their opposing views on many issues.

"You could not disrespect her character or her contribution to Britain's national life," Blair said.

Not all Britons agreed. Several hundred people gathered in Glasgow and in London's Brixton neighborhood for impromptu celebrations, complete with party hats and streamers.

The National Union of Miners -- which tussled with Thatcher in a long 1984-85 strike, and lost -- expressed condolences to Thatcher's family, but said: "The damage caused by her fatally flawed politics sadly lingers on. Good Riddance."

Born Margaret Roberts in 1925, CBS News correspondent Elizabeth Palmer reports Thatcher became a chemist, a proud housewife, and a Conservative member of Parliament, which, she thought, was as far as she would get.

"I don't think we will see a woman prime minister in my lifetime," Thatcher once said.

In 1979, she proved herself spectacularly wrong, and her trademark -- helmet hair, cut-glass accent and bullying style -- became a staple of British satire.

But the Iron Lady had a serious mission: to modernize British industry and break the powerful trade unions.

The fallout was brutal -- violent strikes and rocketing unemployment -- but Mrs. Thatcher never wavered. Slowly, the economy did improve, and Mrs. Thatcher's uncompromising capitalism caught on with a new generation.

In the 1980s, as an unlikely commander-in-chief, she led British forces to victory in the Falklands war against Argentina and appointed herself referee-in-chief between Moscow and the White House.

But enemies were on the march. A deeply unpopular new property tax brought riots and her final undoing. In a bitter blow, her own party turned against her, and in 1990 threw her out.

"We're leaving Downing Street for the last time," she said at the end.

It was the first time she shed tears in public, and the beginning of a long decline. Margaret Thatcher grew frail and developed dementia.

Britons will remember her as Maggie the Iron lady, who supporters still believe put the Great back into Britain.