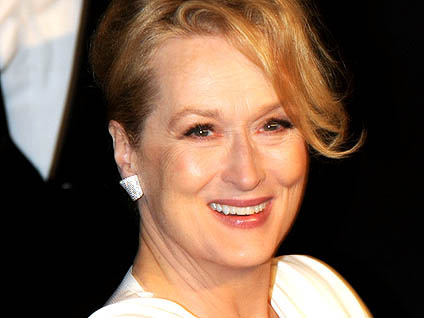 A British newspaper says the Hollywood actress, who plays the former Conservative prime minister, and others involved in the upcoming bio-pic "The Iron Lady," have drawn criticism from the Thatcher family for the screenplay, which depicts Thatcher as an elderly dementia-sufferer looking back on her life and career with sadness.

In the film, Thatcher reportedly is shown talking to herself and is unaware that her husband, Sir Denis Thatcher, has died.

According to a friend of the family who spoke to UK newspaper the Daily Telegraph, "Sir Mark and Carol are appalled at what they have learnt about the film," says the friend." They think it sounds like some Left-wing fantasy. They feel strongly about it, but will not speak publicly for fear of giving it more publicity." The friend was speaking of Thatcher's two children, Carol Thatcher and Mark Thatcher.

Director Cameron McCracken confirms to the newspaper: "It is true that the film is set in the recent past and that Baroness Thatcher does look back on both the triumphs and the lows of her extraordinary career."

McCracken adds of the film, "It is about power and the price that is paid for power. In that sense, it is the story of every person who has ever had to balance their private life with their public career."

He says Lady Thatcher's health will be featured, but insists that it will be "treated with appropriate sensitivity". He adds: "Although fictional, it will be fair and accurate."