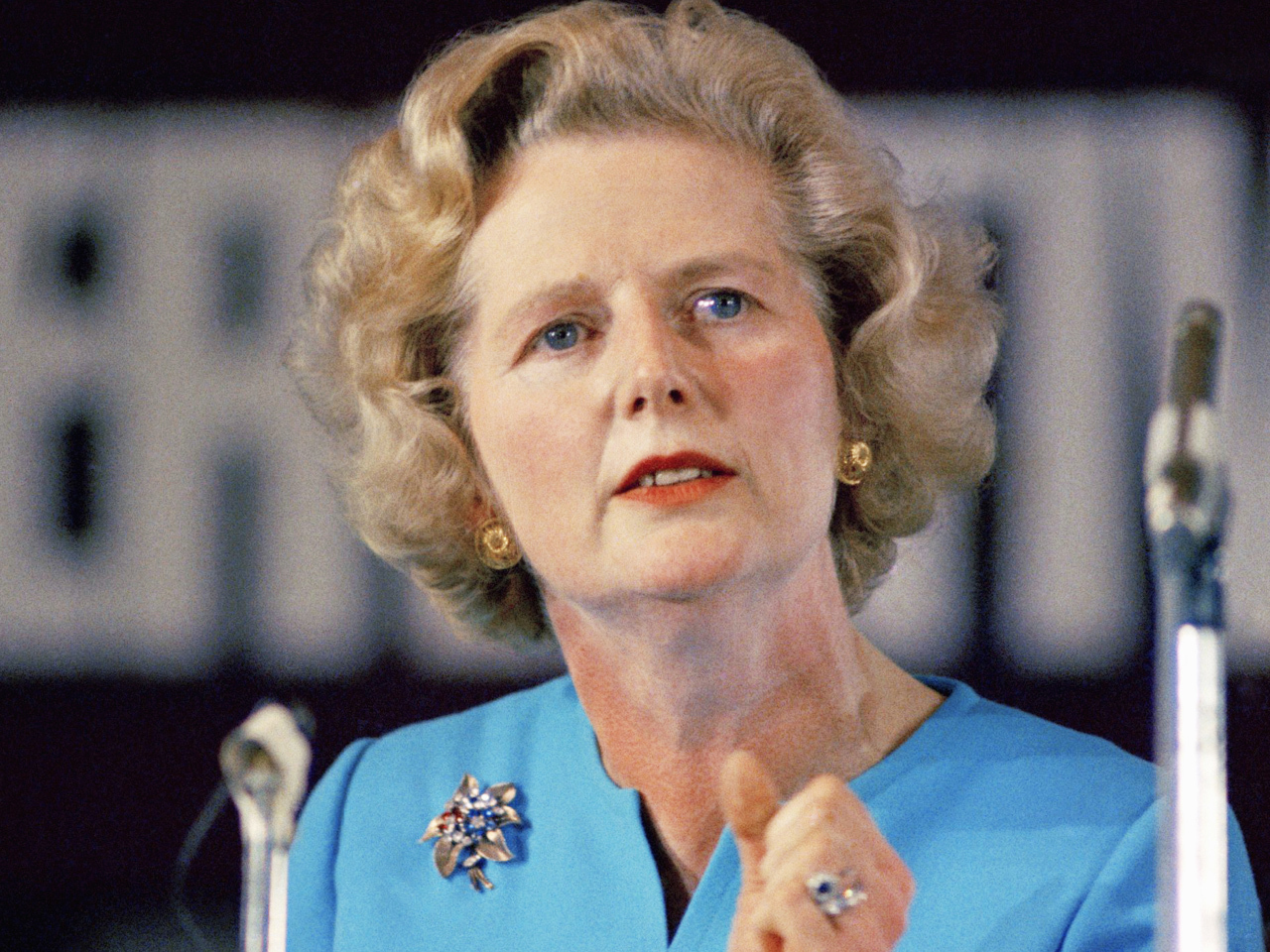 The Conservative former prime minister, who died Monday of a stroke at the age of 87, ruled Great Britain for 11 years beginning in 1979. The "Iron Lady" imposed her will on a fractious, rundown nation -- breaking unions, triumphing in a far-off war, and selling off state industries at a record pace - and left a legacy admired by supporters and lambasted by critics.

President Barack Obama said that with the passing of Thatcher, "the world has lost one of the great champions of freedom and liberty, and America has lost a true friend.

"As a grocer's daughter who rose to become Britain's first female prime minister, she stands as an example to our daughters that there is no glass ceiling that can't be shattered," Mr. Obama said. "As prime minister, she helped restore the confidence and pride that has always been the hallmark of Britain at its best. And as an unapologetic supporter of our transatlantic alliance, she knew that with strength and resolve we could win the Cold War and extend freedom's promise.

"Here in America, many of us will never forget her standing shoulder-to-shoulder with President Reagan, reminding the world that we are not simply carried along by the currents of history -- we can shape them with moral conviction, unyielding courage and iron will. Michelle and I send our thoughts to the Thatcher family and all the British people as we carry on the work to which she dedicated her life -- free peoples standing together, determined to write our own destiny."

As news of her passing spread, politicians who knew her remembered Thatcher for her resolve and fortitude at a time of economic crisis and war. Even those of opposing political stripes acknowledged her success, as the first female prime minster in British history.

Ed Miliband, leader of the U.K.'s Labor Party, today remembered Thatcher as a "unique figure [who] reshaped the politics of a whole generation. . . .

"The Labor Party disagreed with much of what she did and she will always remain a controversial figure," Miliband said. "But we can disagree and also greatly respect her political achievements and her personal strength."

Nick Clegg of the Liberal Democrat Party and Britain's deputy prime minister, said, "Whatever side of the political debate you stand on, no one can deny that as prime minister she left a unique and lasting imprint on the country she served.

"She may have divided opinion during her time in politics, but everyone will be united today in acknowledging the strength of her personality and the radicalism of her politics," Clegg said.

Former British Prime Minster Tony Blair, of the Labor party, said of Thatcher, "Very few leaders get to change not only the political landscape of their country but of the world. Margaret was such a leader. Her global impact was vast."

Of his strongest ally during the 1991 Gulf War, former President George H.W. Bush said Thatcher "was, to be sure, one of the 20th Century's fiercest advocates of freedom and free markets -- a leader of rare character who carried high the banner of her convictions, and whose principles in the end helped shape a better, freer world."

On "CBS This Morning" former Secretary of State Colin Powell said of Lady Thatcher, "She was tough as nails.

"I think she was a great leader, she was a determined person, she was someone who had a vision, a purpose and went after that purpose, and she brought everybody along with her for a while. Of course she ran into difficulties as politicians often do.

"She certainly was as President Gorbachev said an iron lady," Gen. Powell said. "We had a lighter view; we used to say, 'Watch out for the handbag.'

In a statement former U.S. President George W. Bush said he and his wife Laura were "saddened" by the death of Thatcher.

"She was an inspirational leader who stood on principle and guided her nation with confidence and clarity," President Bush said.

"Prime Minister Thatcher is a great example of strength and character, and a great ally who strengthened the special relationship between the United Kingdom and the United States. Laura and I join the people of Great Britain in remembering the life and leadership of this strong woman and friend."

Former U.S. President Jimmy Carter called Thatcher "a strong ally for peace and human rights . . . As prime minister, her government was in the forefront of those who stood with the United States on key concerns, including the need for the SALT treaty, a stronger NATO alliance, majority rule in Zimbabwe-Rhodesia, and efforts to bring the Iran hostages home peacefully."

Former President Bill Clinton called Thatcher "an iconic stateswoman and a fearless leader. . . . Like so many others, I respected the conviction and self-determination she displayed throughout her remarkable life as she broke barriers, defied expectations, and led her country."

"Margaret Thatcher, a grocer's daughter, stared down elites, union bosses, and communists to win three consecutive elections, establish conservative principles in Western Europe, and bring down the Iron Curtain," Boehner said in a statement. "There was no secret to her values -- hard work and personal responsibility -- and no nonsense at all in her leadership. She once said, 'Defeat? I do not recognize the meaning of the word.'

"Now this lady who was never for turning goes to rest as grateful friends and allies around the world mourn her passing and pray for her loved ones."

Mike Summers, of the Falkland Islands Legislative Assembly, said Thatcher would be forever remembered in the Islands for her "decisiveness" in sending U.K. military forces "to liberate our home following the Argentine invasion in 1982. . . . Her friendship and support will be sorely missed, and we will always be thankful for all that she did for us."

Argentina's government offered no official reaction, but scores of Argentinians posted criticisms of her on Twitter, blaming her for the deaths of 649 Argentine troops during the South Atlantic conflict. Some 255 British military personnel and three Falkland Islanders also died.

Gerry Adams, president of Ireland's Sinn Fein Party and a leading critic of Thatcher, criticized the former prime minister in a statement Monday, saying she "did great hurt to the Irish and British people during her time as British Prime Minister. Working class communities were devastated in Britain because of her policies.

"Her role in international affairs was equally belligerent, whether in support of the Chilean dictator Pinochet, her opposition to sanctions against apartheid South Africa, and her support for the Khmer Rouge.

"Here in Ireland her espousal of old draconian militaristic policies prolonged the war and caused great suffering. . . . Margaret Thatcher will be especially remembered for her shameful role during the epic hunger strikes of 1980 and '81.

Israeli Prime Minister Benjamin Netanyahu said on the passing of Thatcher, "She was truly a great leader, a woman of principle, of determination, of conviction, of strength; a woman of greatness. She was a staunch friend of Israel and the Jewish people."

In a statement Nancy Reagan said that Thatcher and her late husband, former President Ronald Reagan, enjoyed "a very special relationship" during one of the most difficult and pivotal periods in modern history.

"Ronnie and Margaret were political soul mates, committed to freedom and resolved to end Communism," Reagan said. "As Prime Minister, Margaret had the clear vision and strong determination to stand up for her beliefs at a time when so many were afraid to 'rock the boat.' As a result, she helped to bring about the collapse of the Soviet Union and the liberation of millions of people.

"Ronnie and I knew her as a dear and trusted friend, and I will miss her," she wrote. "The United States knew Margaret as a spirited and courageous ally, and the world owes her a debt of gratitude."

Buckingham Palace said Queen Elizabeth II was sad to hear the news of the death of Margaret Thatcher. The palace said Monday that the queen will be sending a private message of sympathy to the family.

In a press release from 10 Downing Street it was announced that Lady Thatcher will receive a ceremonial funeral with military honors at St. Paul's Cathedral. The service will be followed by a private cremation.