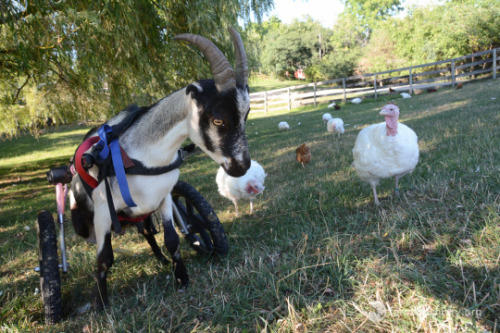 One year ago, Benedict -- the little black-and-white goat pictured in the video above -- was one of 170 animals rescued from what animal advocates described as a severe backyard butcher situation in the Hudson Valley. Witnesses describe the property as part garbage dump, part graveyard. And the many living animals crowded within were quite literally wasting away among the remains of their fellow creatures.

“There were dead animals all over the property in different stages of decay and a lot of them were goats,” explains Susie Coston, national shelter director for Farm Sanctuary. “The conditions were just filthy. And we could tell they’d been feeding the animals things they really shouldn’t eat, like aloe and trash.”

These horrid conditions, paired with extreme neglect, left many of the animals on the farm ill and injured. Benedict was one of the sickest.

The emaciated little goat had lost all use of his back legs, due to an untreated parasite called meningeal worm. And while the condition could have been treated, by the time Farm Sanctuary arrived, it had caused far too much spinal damage to repair.

So, instead, the animal protection organization focused on emotional rehabilitation. They slowly brought him back up to a normal weight. Day by day, they taught him that he needn’t be petrified of humans. And perhaps most importantly, they hooked him up with a new set of wheels.

“All of the animals, when we got them back then, were very skittish,” Coston tells CBS News. “And when you have an animal that can’t walk, they’re especially vulnerable. They don’t know what you’re going to do. So, Benedict was understandably very scared and very weak. He just collapsed when he saw us. As he got better, though, he got a whole lot of one-on-one time with us, so he’s become ridiculously friendly.”

Now, one year after his rescue, Benedict is full of life, running and playing with the other goats at Farm Sanctuary.

“It really shows that the only difference between the animals we have and the animals that are still out there suffering is the way that they’re treated,” Coston says. “All animals can be friendly. But Benedict was seen just as a sort of product. In fact, he was probably treated worse than a product. Once he was treated better and given a dignified life, he turned into this very special, funny goat. So, I think we’re all really lucky to have him and we’re very excited that we were able to give him a better life. One look at the video and you can tell how much he really loves his life.”