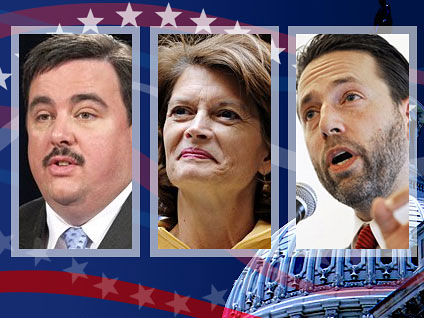 State officials have counted the bulk of the more than 102,000 write-in ballots cast in the Senate election, and 92,164 have gone to Murkowski, the Anchorage Daily News reports. That gives her an edge over Miller, who received 90,458 votes.

More than 8,000 write-in ballots remain to be counted, but if the trend continues, the Republican incumbent will have pulled off a long-shot victory in her write-in re-election campaign.

The Miller campaign, however, told the Daily News the race is "far from over." There are still ballots to be counted, they argue, including about 600 absentee ballots from overseas and military addresses.

More critically, Miller is trying to throw out a number of ballots with a lawsuit challenging the state's counting methodology. The state said early on it would consider "voter intent" and has accepted write-in ballots that were filled out slightly incorrectly. For instance, the state Divisions of Elections Director has approved ballots with minor misspellings such as "Merkowski."

Miller's camp argues the law does not allow state officials to make such determinations about "voter intent" and has challenged thousands of write-in ballots during the counting process. The state allowed 7,601 ballots to go to Murkowski in spite of challenges from Miller's campaign.

Miller's lawsuit has drawn opposition from the Alaska Federation of Natives, the state's largest native group, the Daily News reports. On Monday, the group filed papers to join the state in opposing the suit, arguing that it endangers to voting rights of some Alaskan Natives and others who may not have been able to cast perfectly filled out write-in ballots.

"Perhaps a voter speaks English as a second language, or struggles with English for some other reason?" AFN attorney Thomas Amodio said in a court filing. "Perhaps the voter suffers from dyslexia or Parkinson's, or is disabled? Perhaps their handwriting is simply sloppy, or contains personal flourishes? Miller's answer: Throw out all of their votes."

Meanwhile, Murkowski arrived back in Washington Monday for the start of Congress' lame duck session. National Republican Senate Campaign Chairman John Cornyn congratulated her, the Hill reports, but Murkowski told the newspaper, "We still have more votes to count. I haven't had a sip of champagne yet."

Murkowski was more outspoken about another Alaska political rival -- Sarah Palin. The senator told CBS News' Katie Couric that the former governor lacks the "leadership qualities" and "intellectual curiosity" to be president.

"You know, she was my governor for two years, for just about two years there, and I don't think that she enjoyed governing," Murkowski said.