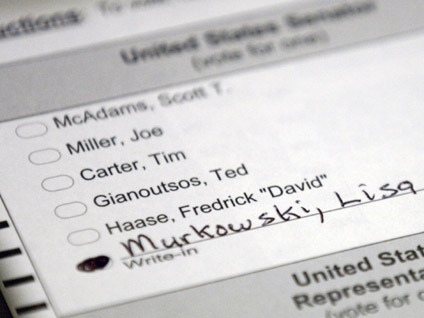 Joe Miller, the Tea Party-backed Republican nominee for Alaska Senate, may be on the cusp of losing the Senate race to Sen. Lisa Murkowski, who ran as a write-in candidate after losing the GOP primary to Miller.

There were more write-in votes than there were votes for Miller, and the vast majority of those ballots seem to have been cast for Murkowski. Miller chosen to address this by challenging votes that appear to have been for Murkowski even when there is only the smallest of justifications for doing so.

Consider: According to the Associated Press, an observer for Miller today challenged a vote that seemed to be for Murkowski because even though her name was spelled and printed correctly, the "L" in Lisa was written in cursive. (Or just have a look at the challenged ballot pictured above.)

Other challenges have been for sloppy handwriting or tiny misspellings - "Lisa Merkowski," for example. While it would seem to be obvious that a write-in for "Lisa Merkowski" is a vote for Murkowski, Miller doesn't want it counted.

Alaska officials have said they will take into account voter intent when considering the ballots - which presumably means that the "Merkowski" vote would go to Murkowski. But Miller's legal team argues that state law does not allow such an interpretation: If the name on a write-in ballot does not exactly match the name of the candidate, they say, it doesn't count.

The legal question will be settled next week, when Miller's legal challenge to the state's position will be heard in court. (Miller already filed suit to stop the count altogether, but a judge turned him down.) If Miller's camp can successfully challenge enough ballots to overcome Murkowski's apparent lead - and the courts decide that their interpretation of the law is correct - he will become a senator.

The issue isn't just a legal one, however. Should Miller triumph by disqualifying a large number of ballots despite clear voter intent, he will have essentially have "won" an election in which he was not the candidate for whom Alaskans tried to cast the most votes.

Alaska officials say they want to count votes for Murkowski that are less than perfect because it means not disenfranchising Alaskans simply for sloppiness or spelling errors. For Miller, however, what the voters meant appears to be less of a concern than finding a way to Washington.