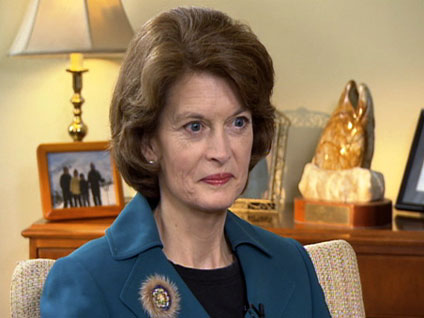 "You know, she was my governor for two years, for just about two years there, and I don't think that she enjoyed governing," Murkowski said. "I don't think she liked to get down into the policy." The Alaska senator added that she prefers a candidate who "goes to bed at night and wakes up in the morning thinking about how we're going to deal with" important issues. (Watch at left.)

Palin endorsed Murkowski's opponent Joe Miller in the Republican Senate primary, an endorsement that helped Miller to an upset victory. Murkowski then embarked on a general election write-in bid that may have been successful: More write in votes were cast than votes for Miller, and the vast majority went to Murkowski.

According to the Alaska Division of Elections, Miller received 90,458 votes, and there were 102,028 total write in votes cast. Of the write-in votes counted so far, 92,164 have gone to Murkowski; another 7,601 have been counted for Murkowski but challenged by Miller. Counting is expected to continue through Wednesday.

Palin and Murkowski have an acrimonious history. Palin first made it to the governor's office by defeating Murkowski's father Frank, the Republican incumbent, in the 2006 election. Four years earlier, in 2002, Frank Murkowski chose to appoint Lisa Murkowski to the Senate, passing over Palin.

When Palin resigned as governor, Murkowski released a terse statement saying she was "disappointed" that Palin quit. And when she announced her write-in bid, Murkowski promised to be "a Republican woman who won't quit on Alaska" - a not-so-subtle shot at Palin for resigning the governorship before the end of her term.

The criticisms haven't been one sided: Following an Alaska Senate debate in October, Palin wrote on Facebook, in reference to Murkowski, that she had "never seen a candidate stoop as low as was seen last night in Alaska's senatorial debate."

The post, entitled "Lisa's Gall vs. Miller's Honor," criticized Murkowski for having "reneged on her primary vow to not contest the will of the people."

In the interview with Couric, Murkowski said she did not have much of a relationship with Palin, though she said their interactions were "always professional."

"We just don't really have much in common - I mean, we don't talk to one another," she said.

"We have common interests in a shared love for our state, and I would like to think that if there were an opportunity to help do something good for Alaska, she would call me, or I could call her," Murkowski added. "But in fairness, she is not really that keyed into the state anymore. She is looking, obviously, at a bigger pond, and so we don't see her up north as much." (The comment comes one day after the debut of Palin's reality show, which is meant to showcase the state.)

Murkowski added that Palin's ability to connect with people is "remarkable." Watch more clips from the interview below, featuring Murkowski and Couric's discussion of the Tea Party movement and Murkowski's response to whether she is a "RINO," or Republican in Name Only: