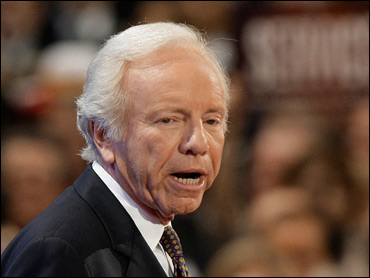 "Sen. Barack Obama is a gifted and eloquent young man who I think can do great things for our country in the years ahead," Lieberman said. "But my friends, eloquence is no substitute for a record - not in these tough times."
(Read the text and watch

the video
of Lieberman's speech)

The convention hall resounded with boos when Lieberman said the Democratic presidential candidate voted to cut off funding "for our troops on the ground" in Iraq last year.

"What, after all, is a Democrat like me doing at a Republican convention like this?" Lieberman asked the cheering crowd. "Well, I'll tell you what, I'm here to support John McCain because country matters more than party.

"John McCain is the best choice to bring our country together and lead America forward," Lieberman added.

Appearing from the White House via satellite earlier in the night, President Bush hailed McCain as a man "ready to lead this nation," a courageous candidate who risked his White House ambitions to support an unpopular Iraq war.

Mr. Bush reprised the national security themes that propelled him to a second term as he spoke. "We need a president who understands the lessons of Sept. 11, 2001," he said. "That to protect America, we must stay on the offense, stop attacks before they happen and not wait to be hit again. The man we need is John McCain."
(Read the text and watch

the video
of Mr. Bush's speech)

"No matter what the issue, this man is honest and speaks straight from the heart," Mr. Bush said.

"The message of the day was designed to be about defining and re-introducing the candidate but the attention was focused on who was not in St. Paul - or at least not very visibly," said CBSNews.com senior political editor Vaughn Ververs. "Since being unveiled as perhaps the biggest political surprise in recent history last Friday, Republicans - especially the party activists gathered here at the Xcel Center - have been chattering about Sarah Palin and little else. And the news media is not far behind in the curiosity category."

CBS News reports that Palin and former New York City mayor Rudy Giuliani will speak at the convention on Wednesday night during the 10-11 p.m. EDT hour.

Thompson said the Alaska governor, was "from a small town, with small town values, but apparently that's not good enough for some of the folks who are out there now attacking her and her family."
(Read the text of Thompson's speech and watch a

He said McCain's decision to place her on the ticket "has the other side and their friends in the media in a state of panic."

"Democrats present a history-making nominee for president. History making in that he is the most liberal, most inexperienced nominee ever to run for president," Thompson said as delegates roared their agreement.

Thompson jabbed at Obama on abortion, as well.

"We need a president who doesn't think that the protection of the unborn or a newly born baby is above his pay grade," he said in prepared remarks, referring to a recent episode in which McCain's White House rival said it was "above my pay grade" to decide the point at which an unborn child is entitled to rights.

Other Republicans - delegates and luminaries alike - defended Palin, who disclosed on Monday that her 17-year-old unmarried daughter is pregnant. In addition, a lawyer has been hired to represent the governorin an ethics-related controversy back home in Alaska.

"I haven't seen anything that comes out about her that in any way troubles me or shakes my confidence in her," said former Arkansas Gov. Mike Huckabee, who ran unsuccessfully for the party's presidential nomination this year.

"All it has done for me is say she is a human person with a real family," Huckabee said.

And Ron Nehring, chairman of the California state party, said video footage of Palin on a firing range was helping her cause.

"The reports I'm getting back is that every time they show that footage we get 1,000 precinct walkers from the NRA," he told members of his state's delegation, to laughter. "She cuts taxes and shoots moose. That's Gov. Palin," Nehring said.

Despite Thompson's remarks - and McCain's declaration that he was satisfied with the scrutiny his aides had given Palin before his selection - there were fresh disclosures.

Among them: that both as mayor of Wasilla, Alaska, and as governor, she had sought earmarks for local projects. Her most recent round of requests totaled $300 for every Alaskan. McCain has frequently vowed to veto any earmark legislation, and has said she will be a force in his battle to wipe them out.

Additionally, the lawyer hired to defend Palin in an ethics investigation said he also is representing her personally and is permitted to bill the state up to $95,000 for work in the current case. The issue involves the dismissal of public safety commissioner Walt Monegan after he refused to fire a state trooper who had divorced the governor's sister.

Republicans handed Lieberman the prime spot in the evening lineup, and he was set to blend praise for McCain with criticism of Obama.

"When others wanted to retreat in defeat from the field of battle, when Barack Obama was voting to cut off funding for our troops on the ground, John McCain had the courage to stand against the tide of public opinion," the Connecticut Democratic-turned-independent senator said in excerpts released in advance of his speech.

The decision to place Lieberman out front on the convention's second night capped an unprecedented political migration. Only eight years ago, he stood before a cheering throng at the Democratic National Convention in Los Angeles and accepted the nomination as Al Gore's running mate.

In the years since, he lost badly in 2004 when he sought the Democratic presidential nomination, lost a Democratic nomination for a new term at home in Connecticut in 2006, then recovered quickly to win re-election as an independent.

Back in the Senate, his vote allows the Democrats to command a narrow majority, yet he has been one of the most outspoken supporters of the war in Iraq. He has traveled widely with McCain in recent months, and occasionally has angered Democrats with remarks critical of Obama.

Mr. Bush, with his approval ratings in the 30-percent range, was relegated to a relatively minor role at the convention of a party that has twice nominated him to the White House. The president scrapped a planned Monday night speech because of the threat Hurricane Gustav posed to New Orleans. With polls making it clear the nation is ready for a change, the McCain campaign indicated there was no reason for him to make the trip to St. Paul.

One day after a frightening Gulf Coast hurricane prompted a subdued opening to the McCain convention, political combat enjoyed a resurgence.

McCain's aides disputed a claim that vice presidential running mate Sarah Palin had once been a member of a third party and accused Obama's camp of spreading false information.

"Their gripe is with those folks," he said of the McCain campaign.