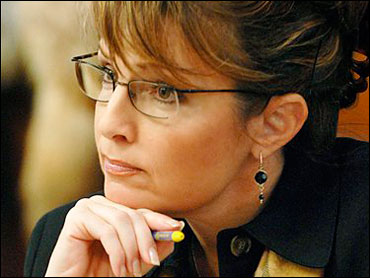 Alaska Gov. Sarah Palin, the Republican vice presidential candidate, is being represented by an attorney in the investigation into the firing of her public safety commissioner.

The Legislature is investigating whether Palin fired public safety commissioner Walt Monegan after he refused to fire a state law enforcement official who had divorced Palin's sister.

The governor's decision to hire the attorney was disclosed by the Legislature's investigating committee on Monday, not by Gov. Palin's office. The committee released an e-mailed letter it had received from Palin's new lawyer on Friday, the day McCain announced she would be his running mate.

"We have been hired to represent the Governor and the Governor's Office" in the investigation, Anchorage attorney Thomas V. Van Flein wrote. "We fully welcome a fair inquiry into these allegations. ... Please know that we intend to cooperate with this investigation."

In July, a legislative oversight committee approved $100,000 to investigate whether Palin abused her power in firing Monegan.

This political he-said, she-said has dogged Palin for nearly two months and is likely to do so for another two months leading to the Nov. 4 presidential election.

The accuser is blogger and rental car executive Andrew Halcro, a Republican-turned-Independent who lost to Palin in the 2006 governor's race.

The accused is Palin, the rising Republican star with a clean-hands reputation who has the most to lose.

The man in the middle is former commissioner, Monegan, who says Palin never told him to fire Mike Wooten, but he felt pressure to do so from members of her administration.

Then there's Wooten, who used a Taser on his stepson, Palin's nephew Payton. Wooten has been reprimanded for violating nearly a dozen laws and departmental policies since December 2001.

The matter is now in the hands of a state-hired investigator working for a Republican-dominated legislative committee that hopes to sort out the mess.

Palin steadfastly denies the allegations, and with her signature resolve, said she welcomes the investigation. "Hold me accountable," she challenge her critics.

With Palin now in the national spotlight as McCain's choice as running mate, the investigation could get more attention than the federal corruption probes involving Republican Sen. Ted Stevens and others that are already besetting this state.

"With this appointment, you've given an obscure investigation more national limelight than any grand jury," said Democratic consultant Dane Strother. "Think about it, if they come down on her, what is McCain going to do?"

McCain's campaign says it's not worried about the investigation. "The bottom line is Governor Palin has a proven record championing transparency in government and we are confident in that record," said McCain spokeswoman Maria Comella.

Monegan was fired in July, after he declined a transfer to become the director to the state's alcohol control board.

At the time Palin said she wanted the department to move in a new direction. But later, after Monegan said he felt pressured to fire Wooten, Palin at a news conference said Monegan wasn't a team player, didn't do enough to fill vacancies and battle alcohol abuse issues in rural Alaska.

State lawmakers have long said they understand that Monegan and other commissioners serve at will, meaning they can be fired by Palin at any time.

But they want to know if Palin abused her power with the potential motives of this firing being personal rather than work-related.

It began with a July 17 blog posting from Halcro, whose accusations gained momentum when Monegan publicly said he felt pressure from Palin's administration to fire Wooten.

A few days later, the state approved $100,000 to hire an outside investigator, Branchflower, a former Anchorage prosecutor, to look into the firing.

Monegan could not be reached for comment, but he recently told the Anchorage Daily News that he was never directly told by Palin or anyone to fire Wooten. But he maintained that Palin, members of her administration and her husband, Todd Palin, raised the issue about Wooten's employment numerous times.

A month after Monegan was dismissed, Palin revealed that at least two dozens calls were made from her staff members to Department of Public Safety officials, also questioning Wooten's employment. But she denied orchestrating the calls.

One of those took place between Frank Bailey, Palin's director of boards and commissions, and an Alaska state trooper serving as a liaison to the Legislature.

In the recorded conversation, Bailey is heard saying: "Todd and Sarah are scratching their heads, why on earth hasn't, why is this guy still representing the department? He's a horrible recruiting tool. ... You know, I mean from their perspective, everyone's protecting him."

Palin has said she had no knowledge of the call, and Bailey told The Associated Press that he made the call without direction from anyone.

This investigation is separate from a higher profile federal probe of corruption of Alaska politics.

Stevens, the longest serving Republican in U.S. Senate history, faces trial later this month for allegedly lying on federal disclosure forms to hide $250,000 in gifts from VECO Corp. The state's only congressman, Rep. Don Young, also is under investigation. Five former and current state lawmakers have either been sentenced to federal prison or await trial on bribery and conspiracy charges.

Wooten did not a return message left Sunday by The Associated Press.