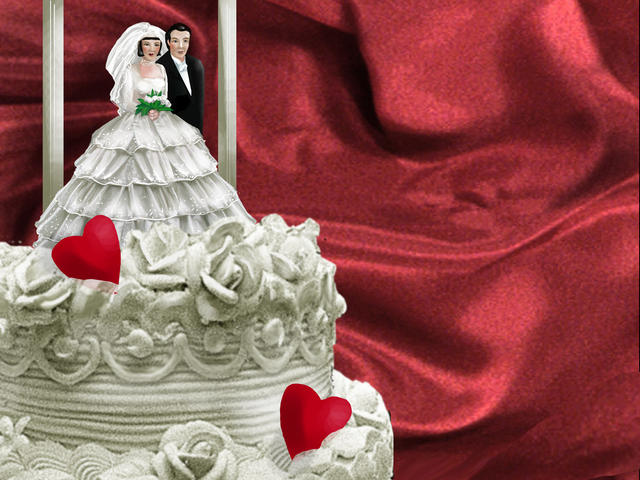 There's only one month left until Prince William and Kate Middleton officially become husband and wife, and when it comes to choosing a wedding cake, it looks like the couple has already mastered an important component of marriage: compromise.

A couple's wedding cake is the centerpiece of a reception - and at the highly anticipated royal wedding, the couple couldn't agree on one cake. Their solution: let them eat two.

The main royal cake on display at Buckingham Palace will be a fruit cake dreamed up by Kate and designed by famed British cake maker Fiona Cairns.

Cairns told CBS News, "She had quite a few ideas, and has led us as to how she would like her wedding cake."

Paul Courtney from McVitie's Cake Company will design the confection requested by Prince William - a chocolate biscuit cake based off a royal family recipe, and a childhood favorite of William, who used to enjoy it with tea.

Courtney said of the royal wedding gig, "It's incredible, a once-in-a-lifetime opportunity."

Kate's opting to go with a more traditional, multi-tiered fruit-cake. And while Cairns is staying tight-lipped about its exact secrets, she was willing to dish on some details.

"It's cream and white, it's a traditional cake, but it is also I would say quite delicate, quite modern, with a vintage element," she said.

Just like any traditional fruit cake, it'll be made up of dried cherries, raisins, walnuts - and for good measure - it will be soaked overnight in booze.

Kate's vision includes a heavy floral design, with about 16 flowers, one of them called sweet William - a sweet touch for a dessert rich with symbolism.

Marc Meltonville, a food archaeologist and historian, said on "The Early Show" the traditional fruit cake was chosen by Kate because it can be given as gifts to guests and it stays intact longer than other cakes.

"A fruit cake (is) really, really dense, like a Christmas pudding. It keeps really well," he said.

Meltonville added, "I even found out that you can still buy pieces of Charles and Diana's wedding cake online. One thousand bucks will get you a slice of that one and that's 20 years old."

When asked about Cairns' design for Kate's cake, Meltonville said it's going to be "exciting" and "bold."

"It's going to be covered in flowers," he said. "So it's going to be really tall, decorative, and each one of those flowers has got a meaning. We're a United Kingdom here. ... There's going to be roses for England and thistles for Scotland and shamrocks for Ireland, and daffodils for Wales. So the whole thing will be very vibrant, but every piece will have a message."

As for William's cake - called the "groom's cake" by Americans - Meltonville said it's likely to taste like "refrigerator cake" with a flavor similar to rocky road ice cream. The chocolate cake will be cut cold.

He added having two cakes at a royal wedding is far from unusual.

"We go back to the famous Charles and Diana," he said. "They had 27 official cakes for all the different occasions that were part of the wedding. So I think two is quite conservative."

As for the dinner at the royal wedding, Meltonville said it's all about feasting.

"A wedding meal is probably the last chance for anyone in the modern world, America or here, gets to know what a feast was like for wealthy people in the past," he said. "(It's) the only time you get to sit at a top table. You get to be the guest of honor. You get almost the idea of a medieval hall, recreated for your wedding. And so everything is just about having a really good time and treating your guests to the best food."

He explained, "When our present queen had a coronation, we had traditional coronation chicken from that inspired entirely from that event. Wouldn't it be rather cool if there was one dish from that wedding?"