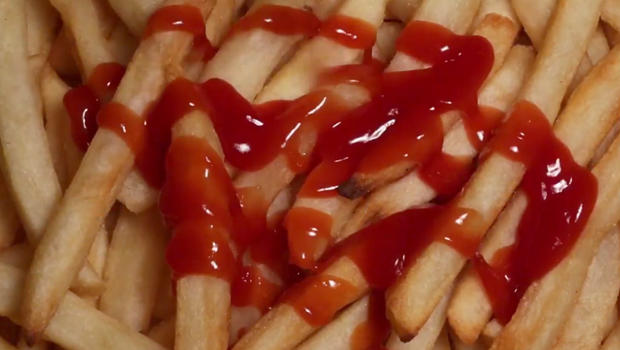 French fries and ketchup are a familiar TASTE OF SUMMER. Luke Burbank can hardly wait to dig in (This story was originally broadcast November 19, 2017):

Ketchup is just one of those "American" things … so common, so typical, so ubiquitous, that most of us never give it a second thought.

"It has everything that you could want," said food historian Andrew Smith. "It's sweet and sour. It's got vinegar in it. It's got sugar in it."

Smith says ketchup actually started out in what is now considered Indonesia, as a sort of fish sauce called kêtsiap. British colonists brought it home, and then in the 19th century it landed in the U.S., where there was an over-abundance of tomatoes.

"If you had a ton of tomatoes in September or October, you had to do something with them," said Smith. "And one of the things that you could do with them is make ketchup."

It took off immediately, due to its ability to add flavor to things. And we mean everything.

And the man maybe most responsible for ketchup's spread was a young German-American businessman in Pittsburgh named Henry J. Heinz. He started out selling horseradish, with limited success. But it was his tomato ketchup that really took off.

Troy Shannon, who works for Heinz, showed Burbank the California tomato field where the workhorse of Heinz's ketchup, the 4707 tomato, is grown.

"This tomato is exactly right for ketchup. It's much thicker and less juicy than a normal tomato that you buy in a grocery store," Shannon said.

The 4707 has actually been patented by Heinz, the result of years of research and development. And after those 4707s are picked, they become the responsibility of Hector Osorno, a Tomato Ketchup Master (yes, that is his real title), who knows the secret recipe.

Osorno is one of only seven Ketchup Masters at Heinz charged with maintaining the taste, color and consistency of all 650 million bottles sold each year.

But one place his Ketchup Mastery won't be necessary? Chicago -- at least not when it comes to hot dogs.

Step behind the counter at Portillo's, and you'll see that Chicago-style hot dogs (fixed with fresh-chopped onions, a kosher dill spear, and two sport peppers) aren't hurting for flavor. But never mind the ketchup.

"No ketchup. No ketchup. Anything else, but no ketchup," said Mario Garcia. "It's, like, sacrilegious!"

And don't even think about asking for ketchup across town at the legendarily saucy Weiner's Circle. When Burbank asked for ketchup on his hot dog, he was politely informed, "Heck, no. That's against the rules of the Wiener's Circle. We don't do ketchup on hot dogs, okay? Not in Chicago, either. No. Now, go sit down and eat it up."

Not one to take no for an answer, Burbank tried some surreptitious application of ketchup on his hot dog. She would have none of it. "No f*****g ketchup, man!"

Well, he had to try. The good news is, that just means more ketchup for the rest us.

The makers of Heinz Ketchup say that to speed its flow from the bottle, tap the spot marked with a "57" on the bottle's neck. Try it!

What's the secret? According to the website Co Design, it's applying force to the neck of the bottle, not the bottom, that speeds the flow - and the "57" label is the appropriate target.