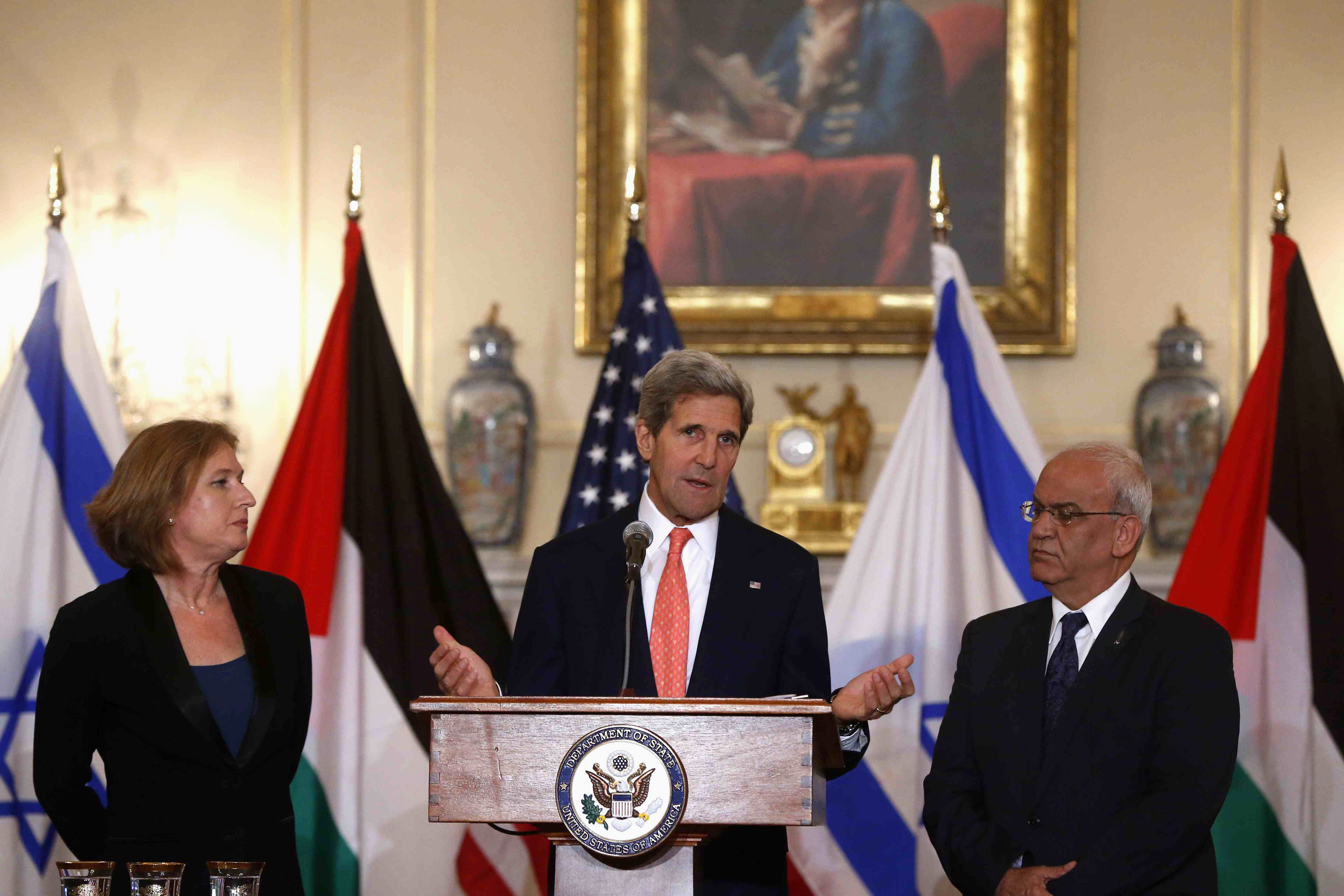 Peace talks between Israelis and Palestinians will officially resume in the next two weeks, U.S. Secretary of State John Kerry announced Tuesday at the State Department with negotiators from both sides.

All of the core issues are on the table for negotiation, with the goal of reaching a final status agreement over the course of the next nine months, Kerry said.

"The time has come for a lasting peace," said Kerry, who has for months worked with the Israelis and Palestinians to break a years-long stalemate. "We all appreciate -- believe me -- we appreciate the challenges ahead."

Kerry said that while he understands the skepticism surrounding the negotiations, "I don't share it and I don't think we have time for it." The Israelis and Palestinians, he said, "can make peace for one simple reason: because they must. A viable two-state solution is the only way this conflict can end, and there is not much time to achieve it, and there is no other alternative."

Kerry on Monday night hosted Palestinian and Israeli negotiators at the State Department to an Iftar dinner -- the meal that marks the breaking of the day-long fast observed by Muslims during the holy month of Ramadan. The dinner was a symbolic start to the first round of face-to-face negotiations between the two parties for the first time in three years.

Palestinian chief negotiator Saeb Erekat expressed appreciation to both Kerry and President Obama for ushering both sides back to the negotiating table.

"Palestinians have suffered enough, and no one benefits more from the success of this endeavor than Palestinians," he said, adding that he is "delighted all final status issues are on the table and will be resolved without any exceptions."

"It's time for the Palestinians to have a sovereign independent state of their own," he said.

Kerry has credited President Obama for kickstarting the round of diplomacy that led to this week's meetings when he traveled to Israel and Ramallah in March, and but the effort has largely been led by Kerry.

Livni added that Mr. Obama's trip to Israel left a "powerful impression" that "still remains in the hearts of the Israeli people."

"We all know it's not going to be easy," she said. "But I can assure in these negotiations it's not our intention to argue about the past but to create solutions and make decisions for the future."

"Their commitment to make tough choices, frankly, should give all of us hope these negotiations actually have a chance," he said.

There are a number of thorny issues that negotiators must overcome, as CBS News' Margaret Brennan explained: For instance, Palestinians are skeptical of whether the Israeli government will freeze settlement construction in the Palestinian Authority-led West Bank -- a concern that drove hundreds of upset Palestinians to protest in the West Bank and Gaza on Sunday. Negotiators will also have to settle whether a future Palestinian state would include Jerusalem and whether Palestinian refugees would have a right to return.

Two senior administration officials told CBS News that the parties involved are anticipating how tough the negotiations will be -- as meetings get underway in the next two weeks, they are expecting provocations on both sides that will interfere with the process. Both sides need to be ready for it, they said.

Kerry and the Palestinian and Israeli negotiators were joined at dinner Monday night by Martin Indyk, the former U.S ambassador to Israel who will serve as the United States' new Middle East envoy. Indyk will assume the day-to-day responsibility for keeping the talks alive for the next nine months. To help encourage talks, the U.S. and former British Prime Minister Tony Blair have also put together a $4 billion economic development plan with the help of private investors.

Kerry pointed out that economic assistance "can help transform the Palestinian economy" and that "the new jobs, the new homes, the new industries that can grow in a Palestinian state can also benefit Israelis next door."

Both sides have agreed to keep the progress of negotiations confidential, Kerry said, adding that he will be the only one authorized to comment publicly on the talks.

"No one should consider any reports... reliable unless they come directly from me, and I guarantee you they won't," he said.