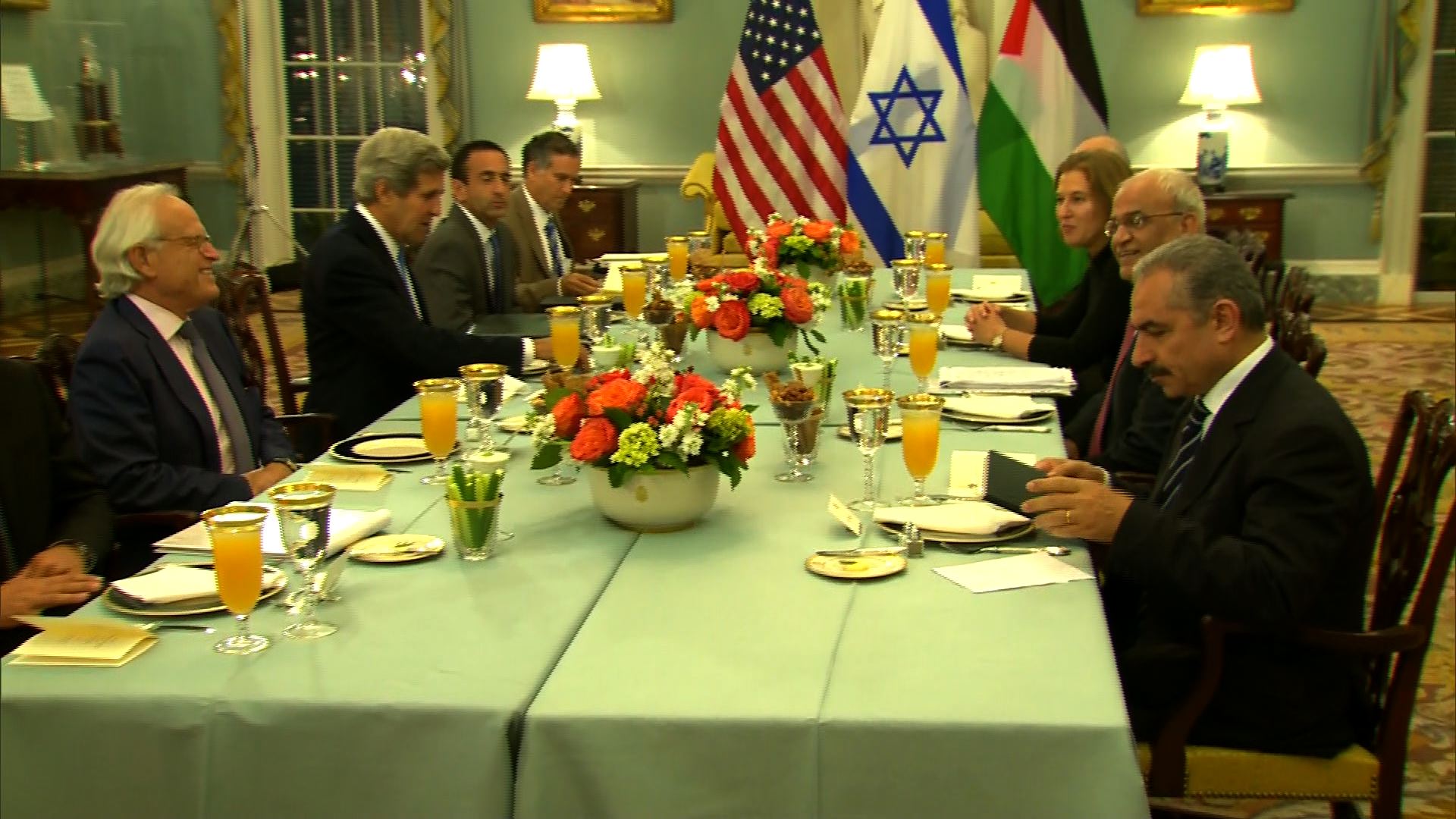 WASHINGTON With a cast of characters that has presided over numerous failed Middle East peace efforts, the Obama administration launched a fresh bid Monday to pull Israel and the Palestinians into substantive negotiations.

Despite words of encouragement, deep skepticism about the prospects for success surrounded the initial discussions, which were opening with a dinner hosted by Secretary of State John Kerry. He named a former U.S. ambassador to Israel to shepherd what all sides believe will be a protracted and difficult process.

Former envoy Martin Indyk, who played key roles in the Clinton administration's multiple, unsuccessful pushes to broker peace deals between Israel and Syria and Israel and the Palestinians, will assume the day-to-day responsibility for keeping the talks alive for the next nine months.

President Obama echoed Kerry's hopeful sentiment in a White House statement that said Indyk "brings unique experience and insight to this role, which will allow him to contribute immediately as the parties begin down the tough, but necessary, path of negotiations."

The Israeli side will be led by chief negotiator Tzipi Livni, a former foreign minister who was active in the Bush's administration's ill-fated Annapolis peace talks with the Palestinians, and Yitzhak Molcho, a veteran adviser to Prime Minister Benjamin Netanyahu who was part of the Israeli team involved in Mr. Obama's two previous attempts to broker negotiations. Those two efforts relied heavily on Dennis Ross, a former Indyk colleague and Mideast peace envoy, and veteran negotiator George Mitchell.

The Palestinian team will be led by chief negotiator Saeb Erekat and President Mahmoud Abbas' adviser, Mohammed Shtayyeh, both of whom have been major players in failed negotiations with the Israelis since 1991.

Kerry spoke for about 45 minutes with representatives from the Israeli negotiating team and then another roughly 45 minutes with the Palestinian side before sitting down for dinner on the top floor of the State Department.

"Not very much to talk about at all," Kerry joked just before starting dinner shortly after 9 p.m.

They sat at a rectangular table -- five U.S. officials lining one side and the two Israeli and two Palestinian negotiators on the other -- to dine on sweet corn and shell bean soup, grilled grouper, saffron risotto, summer vegetables and apricot upside down cake.

The meal, which marks the breaking of the day-long fast observed by Muslims during the holy month of Ramadan, is a symbolic start to the first round of face-to-face negotiations between the two parties for the first time in three years, points out CBS News correspondent Margaret Brennan.

The talks were to continue Tuesday at the State Department.

Despite the presence of so many people whose past experience does not include success, Kerry and other officials voiced cautious optimism about the resumption of talks he painstakingly negotiated during six months of shuttle diplomacy that began with Mr. Obama's own trip to Israel in March.

"It sounds like we're lucky to have decades of experience ready to come back to the table and make an effort to push forward," State Department spokeswoman Jen Psaki said.

Kerry's shuttling back and forth between the two sides was designed to "convince them that they at least need to get into the same room. He invested a lot of political capital and jet fuel to get to this point," Brennan says.

While there is no official deadline to the talks, Kerry has said previously that failing to address the issue of Palestinian-Israeli peace now will only add to future complications, Brennan notes, adding that, "With the help of private investors, Kerry and former British Prime Minister Tony Blair have also cobbled together a four billion dollar economic development plan that may encourage the parties to stay at the table. Private investors including Ripplewood Holding's Tim Collins are among those advising on the economic angle."

Previous attempts to get talks started have foundered on Israel's continued construction of Jewish settlements on land claimed by the Palestinians and Palestinian attempts to win international recognition as a sovereign state in the absence of a peace deal. Actual negotiations have died because the two sides have been unable to compromise on the most serious disagreements between them: borders, the status of Jerusalem, refugees and security.

With a U.S.-imposed gag order on revealing any details about the substance or framework of the talks, gauging progress will be difficult. But the outlines of any eventual peace deal are fairly well known: a Palestinian state based on the lines that existed before the 1967 war in which Israel seized east Jerusalem and occupied the Palestinian territories, with agreed land swaps and recognition of a secure, Jewish state of Israel.

But neither side will publicly commit to those goals, and getting there will require major concessions that will be difficult to sell to the Israeli and Palestinian publics.

Ahead of the initial discussions on procedures and guidelines for the meetings, which the U.S. hopes will grow into deeper, more substantive talks on the key sticking points, Kerry urged both sides to strive for "reasonable compromises on tough, complicated, emotional and symbolic issues."

He acknowledged that the path ahead would be long and difficult. But he said that Indyk had the respect and confidence of all involved and that his vast experience in Middle East diplomacy could only help.

Indyk, 62, will take a leave of absence from his current job as vice president and foreign policy director at the Washington-based Brookings Institution think tank.

In announcing Indyk's appointment, Kerry noted the former ambassador had opened the preface to his 2009 book, "Innocent Abroad: An Intimate Account of American Peacemaking Diplomacy in the Middle East," with lines from the English poet Samuel Taylor Coleridge.

"If men could learn from history, what lessons it would teach us," Kerry quoted.

He did not continue to the next lines as Indyk did in his book:

"But passion and party blind our eyes,"

"And the light which experience gives us is a lantern on the stern,"

"Which shines only on the waves behind us."