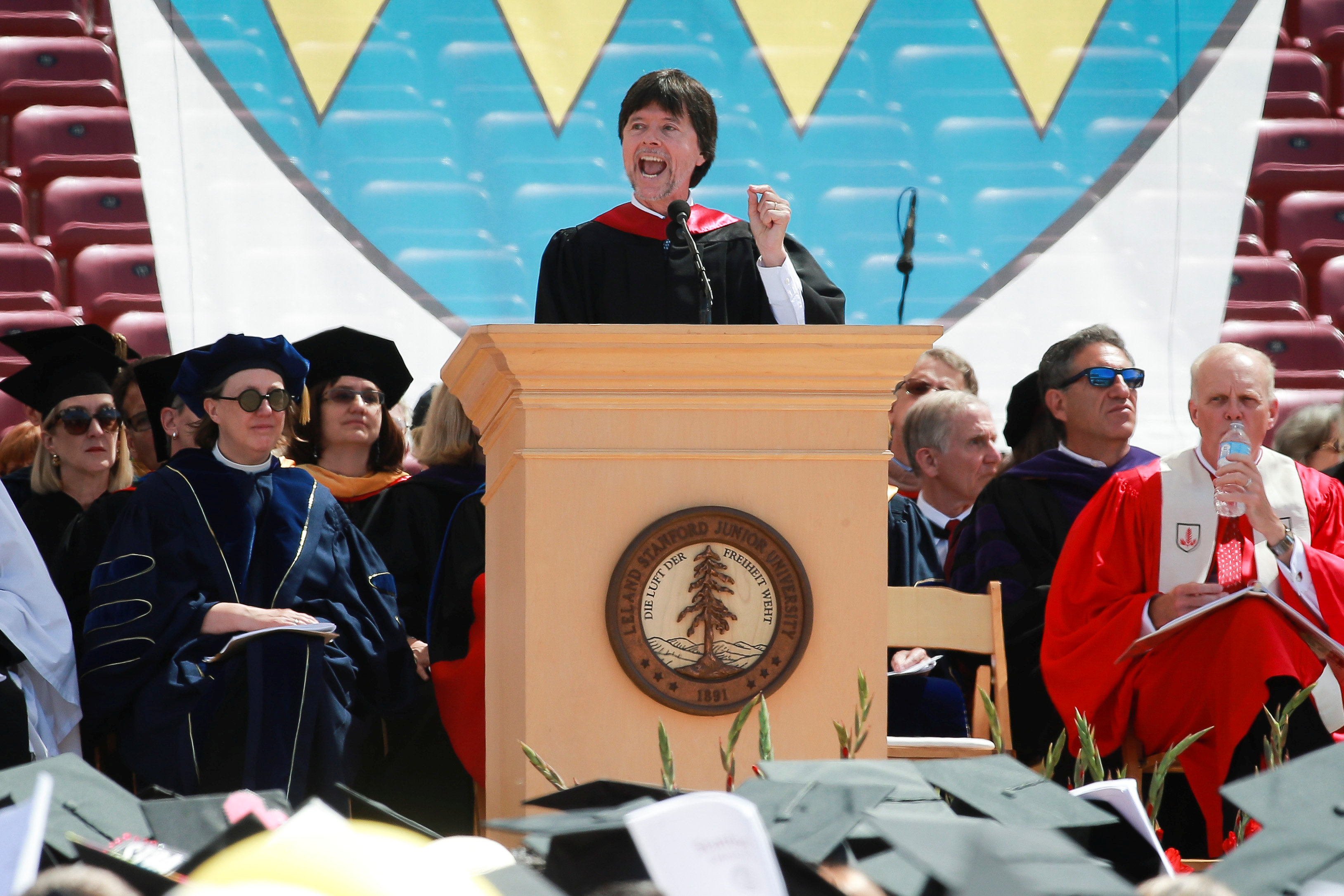 "For 216 years, our elections, though bitterly contested, have featured the philosophies and character of candidates who were clearly qualified," Burns said about halfway through his speech. "That is not the case this year. One is glaringly not qualified."

"So before you do anything with your well-earned degree, you must do everything you can to defeat the retrograde forces that have invaded our democratic process, divided our house, to fight against, no matter your political persuasion, the dictatorial tendencies of the candidate with zero experience in the much maligned but subtle art of governance; who is against lots of things, but doesn't seem to be for anything, offering only bombastic and contradictory promises, and terrifying Orwellian statements; a person who easily lies, creating an environment where the truth doesn't seem to matter; who has never demonstrated any interest in anyone or anything but himself and his own enrichment; who insults veterans, threatens a free press, mocks the handicapped, denigrates women, immigrants and all Muslims; a man who took more than a day to remember to disavow a supporter who advocates white supremacy and the Ku Klux Klan; an infantile, bullying man who, depending on his mood, is willing to discard old and established alliances, treaties and long-standing relationships. I feel genuine sorrow for the understandably scared and - they feel - powerless people who have flocked to his campaign in the mistaken belief that - as often happens on TV - a wand can be waved and every complicated problem can be solved with the simplest of solutions. They can't. It is a political Ponzi scheme. And asking this man to assume the highest office in the land would be like asking a newly minted car driver to fly a 747.

"As a student of history, I recognize this type. He emerges everywhere and in all eras. We see nurtured in his campaign an incipient proto-fascism, a nativist anti-immigrant Know Nothing-ism, a disrespect for the judiciary, the prospect of women losing authority over their own bodies, African Americans again asked to go to the back of the line, voter suppression gleefully promoted, jingoistic saber rattling, a total lack of historical awareness, a political paranoia that, predictably, points fingers, always making the other wrong. These are all virulent strains that have at times infected us in the past. But they now loom in front of us again - all happening at once. We know from our history books that these are the diseases of ancient and now fallen empires. The sense of commonwealth, of shared sacrifice, of trust, so much a part of American life, is eroding fast, spurred along and amplified by an amoral Internet that permits a lie to circle the globe three times before the truth can get started.

"We no longer have the luxury of neutrality or 'balance,' or even of bemused disdain. Many of our media institutions have largely failed to expose this charlatan, torn between a nagging responsibility to good journalism and the big ratings a media circus always delivers. In fact, they have given him the abundant airtime he so desperately craves, so much so that it has actually worn down our natural human revulsion to this kind of behavior. Hey, he's rich; he must be doing something right. He is not. Edward R. Murrow would have exposed this naked emperor months ago. He is an insult to our history. Do not be deceived by his momentary 'good behavior.' It is only a spoiled, misbehaving child hoping somehow to still have dessert.

"And do not think that the tragedy in Orlando underscores his points. It does not. We must 'disenthrall ourselves,' as Abraham Lincoln said, from the culture of violence and guns. And then 'we shall save our country.'

"This is not a liberal or conservative issue, a red state, blue state divide. This is an American issue. Many honorable people, including the last two Republican presidents, members of the party of Abraham Lincoln, have declined to support him. And I implore those "Vichy Republicans" who have endorsed him to please, please reconsider. We must remain committed to the kindness and community that are the hallmarks of civilization and reject the troubling, unfiltered Tourette's of his tribalism.

"The next few months of your 'commencement,' that is to say, your future, will be critical to the survival of our Republic. 'The occasion is piled high with difficulty.' Let us pledge here today that we will not let this happen to the exquisite, yet deeply flawed, land we all love and cherish - and hope to leave intact to our posterity. Let us 'nobly save,' not 'meanly lose, the last best hope of earth.'"

Stanford published a copy of Burns' prepared remarks on its website and posted video of the ceremony on YouTube.

Protesters demonstrated during commencement, carrying signs that read "Stanford protects rapists." The San Jose Mercury News reported a plane circled the stadium with the banner "Protect Survivors, Not Rapists -- Persky Must Go," referring to Judge Aaron Persky, who has been condemned by critics for Turner's sentence.

One sign sent a message to the woman who was assaulted, whose powerful victim impact statement has gained international attention, telling her, "You are a warrior."

"If someone tells you they have been sexually assaulted, take it effing seriously and listen to them," Burns, who is the father of four girls, told the crowd. "Maybe someday we'll make the survivor's eloquent statement as important as Dr. (Martin Luther) King's letter from the Birmingham jail."