There was a time when glamour in Hollywood was truly grand. Today's Tinseltown can often lack the elegance of the past, but that forgotten style has found a new voice.

Her look is seen at hotels like the Viceroy in Santa Monica and the Avalon in Beverly Hills, and in the homes of the rich and famous.

It can easily overwhelm the senses.

"People love it or they don't quite get it," Wearstler said.

"You actually said once, 'Living without color is like living without love.' What does that mean?" Tracy asked.

"Everything is about color. If you look at magazines and advertising and television, the thing you remember is the color."

And these days, lots of people remember Wearstler's vivid work. She's been a dubbed a "tastemaker," influencing the Next Big Thing.

"Who doesn't want to be glamorous?" she laughed.

"I think for many people around the world Kelly's work exemplifies this fantasy of beautiful sun-baked life, glamour in California," said Mayer Rus, the design and culture editor for Los Angeles Times Magazine.

"Kelly's genius is her ability to mix elements from all different eras, styles and periods. There's a certain bravery in what she does that flirts with going over-the-top, but always stands just back from the edge."

Wearstler's work may exude California glitz, but she grew up on the "other" coast - in Myrtle Beach, South Carolina, where she learned interior design from her mother.

After studying design in Boston, she moved to Los Angeles in 1994 to work on movie sets.

Like many hoping to make it in Hollywood, she waited tables to pay the bills. Even then, Wearstler drew attention. A scout from a certain men's magazine took note:

"You did pose for Playboy at one point. How come?" asked Tracy.

Wearstler used the money from Playboy to start her own company. Her so-called "maximalist" style of rich patterns and vintage pieces quickly set her apart.

The "Hollywood Regency" look that made her a star was inspired, in part, by legendary decorator Dorothy Draper: "She was just so bold and full of life, and she was sassy."

"Do you consider yourself a little sassy?"

Wearstler's "sassiness" caught the eye of singer and fashion designer Gwen Stefani: "When I see her stuff, it seems very original and very her," Stefani said.

"She has so much style, she has so much sophistication, and [on] top of it, she's unbelievable to look at, so it's this whole package of beauty," Stefani said.

What Wearstler wears gets plenty of attention. Her over-the-top clothes on the Bravo reality show, "Top Design," created a huge buzz.

So, she likes fashion just a little bit?

And despite her closet being packed with the latest designer trends, there is one vintage piece she can't live without: A bear named Frank, passed down from her grandmother and mother. "He's about 98 years old, and he used to have fur on him. He goes with me everywhere. He's my good luck charm."

Frank seems to work: Celebrity clients, a place on Vogue's best-dressed list, and a big fan in Oprah.

Even her Beverly Hills mansion has some Hollywood history. It used to be the home of Cubby Broccoli, producer of the James Bond films. "They lived here for 55 years," she said.

The 42-year-old Wearstler lives with her husband and two sons in a home where every room has a unique personality. 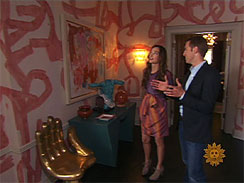 (CBS)
"I imagine when people come to your house, they either love this, or they just don't get it at all," Tracy said, referring to walls that looked like Wearstler's kids had cut loose with paint brushes.

"Can you go overboard?"

"Yes, and you have to pick your poison and know when to stop."

"Have there ever been times where she's come up with something and you say, 'Not in my house'?" Tracy asked.

Despite having to sometimes hold back, Wearstler's always hunting for her next special find.

"How would you approach a client if you said, 'I'd like to sell you a shag couch'?" Tracy asked.

"Well, it would be probably just, like, one piece, 'cause a little goes a long way. But people who collect and understand would get that."

And plenty of people "get" Kelly Wearstler, and look to her for the next colorful design.

"When you walk here in the morning, do you have to pinch yourself?"

"Yeah, the years of waiting tables paid off!" she laughed.