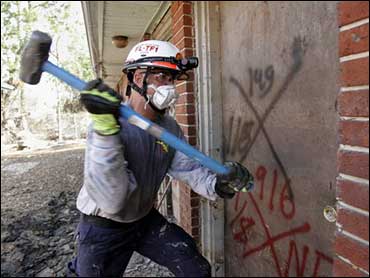 Searchers smashed through doors in New Orleans on Wednesday, bringing their hunt for the dead to homes that had been locked and to blocks hardest hit by Katrina's flooding. Behind those doors, officials said they expected a sharply escalating body count, among them, more children.

The death toll in Louisiana stood at 799 on Wednesday, a jump of 153 bodies since the weekend and nearly 80 percent of the 1,036 deaths attributed to Hurricane Katrina across the Gulf Coast region.

"There still could be quite a few, especially in the deepest flooded areas," said U.S. Coast Guard Capt. Jeffrey Pettitt, who is overseeing the retrieval of bodies. "Some of the houses, they haven't been in yet."

Pettitt and other officials would not speculate on what the final tally could be. They said the effort could last another four to six weeks.

Meanwhile, the House of Representatives approved a $6.1 billion package of tax breaks by a vote of 422-0 Wednesday to help families recover from Hurricane Katrina and encourage Gulf Coast businesses to reopen their doors, or at least keep employees on the payroll.

As the body retrieval from Katrina accelerated, the city prepared for a new threat from Hurricane Rita, which was barreling across the Gulf of Mexico toward Texas. New Orleans Mayor Ray Nagin renewed his plea for residents to get out of the city.

"I got buses, I got troops, I got doctors, I got helicopters standing by. That's what I know. I'm happy with what I know. My problem is what I don't know," Army Lt. Gen. Russel Honore, who is in charge of the military's effort in New Orleans, tells Alfonsi.

Forecasters don't think Rita will hit New Orleans directly, but even a glancing blow could swamp the city again. Crews are working nonstop to repair the fractured levees. But engineers say they're still too weak, Alfonsi reports.

The Army Corps of Engineers said New Orleans levees can only handle up to 6 inches of rain and a storm surge of 10 to 12 feet.

While engineers tend to the levees, about 500 people are involved in the search of locked homes, the third and most intense phase of the recovery effort.

Initially, authorities made a hasty sweep through neighborhoods to identify the living and dead. That was followed by a door-to-door search, though locked doors were off-limits.

Previously, they had not entered unless they saw a body or heard someone inside. Now, even a high water mark on the side of a home was enough to allow them to go in.

At one home, Capt. Edan Jacobs of the Miami-Dade Fire Department kicked at a door a dozen times, then used a sledgehammer. The searchers, wearing special masks to ward off the mold and stench, sometimes have to go to three different entrances before they find one not blocked by refrigerators or couches.

"We try not to destroy the homes, but we have to get inside," said fire department Lt. Eric Baum. "Drastic circumstances call for drastic measures."

Many homes are unsafe to enter, while others lay under piles of muck and debris. Some homes are so structurally unsound they are marked, "Do not enter," and seemingly every house has mold growing from every surface.

The difficulty of gauging the number of dead in those neighborhoods will delay a final count for weeks, said Dr. Louis Cataldi, medical incident commander for Louisiana.

"There's some folks out there we can't retrieve," he said.

He said the elderly appear to make up the bulk of the dead but that searchers also are beginning to find more children.

A mandatory evacuation order was in effect for the entire east bank of the Mississippi, and some 500 buses were standing by at the convention center, but few seemed to be taking advantage. Only one person showed up to be evacuated Wednesday morning.

On Tuesday, Pettitt's team gave the mayor's office a map of the areas where the more intensive phase of the search for bodies should be conducted. On Wednesday, emergency crews hacked their way into houses in the Ninth Ward, an impoverished section of the city notable for being the birthplace of Fats Domino and other black musicians.

Much of the final search was being conducted in eastern New Orleans. Crews probed areas of the city that just recently have been drained enough to allow ground searches, neighborhoods that were closest to the fractured levees and bore the brunt of the floodwaters' force.

As the weeks pass, the urgency of the task increases because bodies are decomposing rapidly.

Bodies are still found scattered around homes and in streets. On Tuesday, a badly decomposed corpse in the Ninth Ward lay draped over a fence, the nearly fleshless head resting on the ground and one leg jutting in the air. There was no outward indication it had been marked for removal by the search crews.

Reporters and photographers roaming the city have recorded numerous bodies in recent days around the city. One that had been marked remained in a house and visible from the street for a week before a reporter notified authorities. It was removed that day.