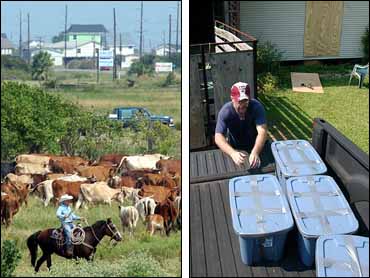 Hurricane Rita grew into a monster storm with 175-mph sustained winds as it swirled toward the Gulf Coast, expected to make landfall early Saturday, prompting more than 1.3 million residents in Texas and Louisiana to flee in hopes of avoiding a deadly repeat of Katrina.

"It's not worth staying here," said Celia Martinez as she and several relatives finished packing up their homes and pets to head to Houston. "Life is more important than things."

Rita is now centered about 540 miles east-southeast of Galveston, moving west at about 9 mph. Forecasters predict it will come ashore along the central Texas coast between Galveston and Corpus Christi.

Hurricane-force winds extend up to 70 miles from the center of the storm, and even a slight rightward turn could prove devastating to the fractured levees protecting New Orleans.

As Texas Gov. Rick Perry urged residents along the state's entire coast to begin evacuating well in advance of Rita's predicted Saturday landfall, New Orleans braced for the possibility that the storm could swamp the misery-stricken city all over again.

Hundreds of buses have been dispatched to evacuate the poor and move out hospital and nursing home patients, and truckloads of water, ice and ready-made meals, and rescue and medical teams are on standby in an effort to show the lessons learned in Katrina.

Galveston Mayor Lyda Ann Thomas, noting that buses used to take people and their pets off the island are running in short supply, is warning that stragglers could be left to fend for themselves.

Thomas said those left on the island will have to find a way off with family, neighbors or friends or will face hunkering down during what she called a "catastrophic, dangerous storm."

More than 180 Galveston police officers will stay behind, with nearly 120 firefighters.

Officials in Corpus Christi plan to load up about 100 buses Thursday morning to evacuate people who have no other way to get out.

In New Orleans, where significant rainfall from Rita could cause new flooding, Mayor Ray Nagin has urged residents to evacuate. But few seem to be doing so: Wednesday, some 500 buses stood by at the convention center waiting for evacuees, but only 27 showed up for the free ride out of town.

Wednesday, the death toll from Katrina passed the 1,000 mark in five Gulf Coast states. The body count in Louisiana alone was put at nearly 800, most found in the receding floodwaters of New Orleans.

Forecasters say Rita could be the strongest hurricane on record to ever hit Texas. Only three Category 5 hurricanes, the highest on the scale, are known to have hit the U.S. mainland - most recently, Andrew, which smashed South Florida in 1992.

"We hope and pray that Hurricane Rita will not be a devastating storm, but we got to be ready for the worst," President Bush said in Washington.

In the Galveston-Houston-Corpus Christi area, about 1.3 million people are under orders to get out, in addition to 20,000 or more along with the Louisiana coast. Special attention was given to hospitals and nursing homes, three weeks after scores of sick and elderly patients in the New Orleans area drowned in Katrina's floodwaters or died in the stifling heat while waiting to be rescued.

CBS News correspondent John Blackstone reports Galveston is becoming a ghost town, as the sick were loaded into helicopters and

those without cars were climbing into busses (video).

The coastal city of 58,000 on an island 8 feet above sea level was nearly wiped off the map in 1900 when a Category 4 hurricane with 130 mph winds and 15-foot waves killed over 8,000 people and swept away half the homes, leaving 10,000 people homeless. The 1900 storm remains the nation's worst natural disaster.

CBS News hurricane analyst Neil Frank reports that Rita's storm surge could be as much as 20 feet high, meaning the barrier island of Galveston could be under water.

Galveston, says City Manager Steve LeBlanc is protected by a seawall that is only 17 feet tall.

"Not a good picture for us," he says.

In Houston, geography makes evacuation particularly tricky. While many hurricane-prone cities are right on the coast, Houston is 60 miles inland, so a coastal suburban area of 2 million people must evacuate through a metropolitan area of 4 million people where the freeways are often clogged under the best of circumstances.

Rita's potential for disaster forced authorities in Texas to move hundreds of Katrina evacuees again - this time, away from the Texas coast - many, to Arkansas.

Wednesday, Rita put another thumbprint on Katrina evacuees, as Country Music Television was forced to postpone the "CMT One Country Concert," a benefit for hurricane victims that was going to be held Saturday in Houston. Organizers say the danger posed by Rita is too much of a risk for volunteers, vendors and artists, who include George Strait, Kenny Chesney, Alan Jackson, Willie Nelson, Martina McBride and ZZ Top.

Crude oil prices rose again on fears that Rita would destroy key oil installations in Texas and the gulf. Hundreds of workers were evacuated from offshore oil rigs. Texas, the heart of U.S. crude production, accounts for 25 percent of the nation's total oil output.

Jennifer McDonald in Galveston plans to ride Rita out. She and her husband have enough food and water to last 10 days in their wooden house. If it gets really bad, the couple will take to the roof.

"If it goes, it goes," the 42-year-old nurse said of the house. "We're completely prepared."