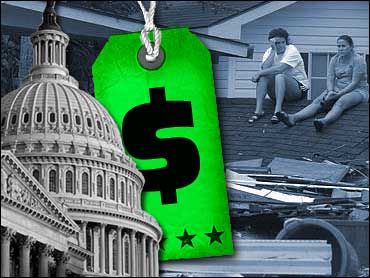 Worried about surviving yet another powerful hurricane, victims of Katrina's winds and floods are about to get some tax help to recover from the first one.

Congress passed $6.1 billion in tax breaks Wednesday to help families recover and to encourage Gulf Coast businesses to reopen their doors, or at least keep employees on the payroll. The bill went to President Bush after a 422-0 House vote and a Senate voice vote.

Most of the tax help is directed specifically at those hit by Hurricane Katrina and would not necessarily apply in other regions damaged by hurricanes before the end of the storm season. As the House voted, Hurricane Rita was bearing down on the Gulf coast west of Katrina's landfall.

"This aid comes at exactly the right time to help victims of Hurricane Katrina as they rebuild their lives," said Treasury Secretary John Snow.

Rep. Jim McCrery, R-La., said tax writers aimed most of their assistance at individuals, and the tax breaks for businesses mean "those businesses, we hope, will be employing and paying residents of the affected area."

Lawmakers intend to follow the immediate aid with a broader package of tax breaks to encourage rebuilding of damaged infrastructure and commerce, particularly in New Orleans. President Bush proposed creating a Gulf Opportunity Zone with about $2 billion in special tax breaks encouraging businesses to build or expand in the region.

Congress first responded to the hurricane's devastating blow by spending more than $62 billion for recovery and rescue efforts. The price tag, expected to increase, has caused wrangling within the GOP over whether to cut government spending elsewhere to defray Katrina's costs.

Speaker Dennis Hastert, R-Ill., rejected calls to delay a Medicare prescription drug benefit or rescind recently passed "pork barrel" highway projects, but a band of almost two dozen conservatives announced proposals to take both steps. The conservatives claim momentum as the burgeoning costs of Katrina have put a renewed focus on the deficit.

The group of House conservative stalwarts announcing "Operation Offset" before a phalanx of television news cameras acknowledged that they had no agreement among themselves on a more than $500 billion roster of ideas to cut spending, many of which — such as cutting public television subsidies — have been resoundingly rejected.

It's unlikely any of these can pass, reports CBS News Correspondent Bob Fuss, but the group has hit a nerve here as Republicans who normally stand by the president become increasingly nervous about continually voting to put the country deeper into debt.

The tax breaks passed Wednesday waive penalties for hurricane victims who need cash for expenses and recovery and want to use money stashed in protected retirement accounts like IRAs. The Treasury Department had already ruled the storm qualified as a hardship and permitted early withdrawals of retirement funds.

Also under the bill, families that rely on the child tax credit and the earned income tax credit could protect those benefits throughout job losses, residency changes and family separations caused by Hurricane Katrina. Those disruptions could mean that some would not qualify for the family tax breaks this year, but the bill lets taxpayers use 2004 information to calculate the credits.

Other assistance lets taxpayers recoup more of their unreimbursed and uninsured losses, and waives taxes imposed when debts, such as mortgages, are forgiven.

Two tax credits encourage Gulf Coast businesses hit by the storm to keep going. One offsets wages paid to employees hired in the region over the next two years. Another helps small businesses hurt by the storm who continue paying their employees through the end of the year.

Most of the tax help is directed specifically at those hit by Hurricane Katrina and would not necessarily apply in other regions hit by hurricanes before the end of the storm season.

The House also approved a measure that would assure that legal immigrants don't lose their status as a result of the disaster. Congress provided similar protections in the Patriot Act passed after the Sept. 11, 2001, attacks.

The bill allows spouses and children of citizens and legal permanent residents who died in the hurricane to continue their immigration petitions, expedites procedures to replace lost green cards or other work authorization documents, allows employers to hire aliens while they are replacing lost documents, and allows aliens on student visas at hurricane-closed schools to transfer to other schools.