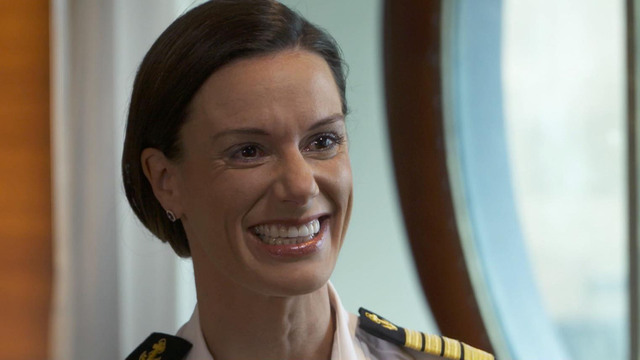 A 91,000 ton vessel set sail yesterday afternoon for a typical cruise to New England and Canada. But what wasn't typical was who was in command, reports CBS News's travel editor, Peter Greenberg.

Kate McCue is at the helm of the Celebrity Summit, with more than 2,000 passengers and a crew of almost 1,000. She is the first American woman to do so.

"Everyone has a stereotypical idea of a captain and I'm missing some pounds. I don't have entirely gray hair. I don't have a beard or a parrot but I think when the guests meet me they're pleasantly surprised," said Kate McCue.

The 37-year-old began at 3:30 in the morning with a non-stop series of inspections and checklists, including making sure the cabins were ready, the galley was fired up, and most importantly, ensuring a smooth and safe voyage for her guests.

McCue's dream to command her own vessel began at the age of 12 when she took her first family cruise to the Bahamas. She said when she told her dad that she wanted to be a cruise director, he gave her the response that would change her life.

"He said, 'You can do anything you want in the world, including drive this thing,'" she said.

She started as a cadet at the California Maritime Academy in 1996 when men at the school outnumbered women 15 to one. Nineteen years and 10 ships later, she is now a maritime master in charge of her own ship.

When McCue first learned that she had been certified to become captain, she broke the news to her father first.

"I asked for special permission to tell my dad on Father's day...and when he finished the letter he looked up at me and then he looked back down at me," she said. "Then he said, 'Captain.' Tears were streaming down his face."

Captaining cruise ships still remains a profession dominated by men. But McCue's boss, the first female chief executive of Celebrity Cruises, said she hopes McCue's example would "makes girls and women raise their hands and say, 'yeah, I think I'd like to do this too.'"

"I think this is the greatest job in the world...traveling, meeting all these people, getting paid for it. It's amazing," said McCue. "And being the boss."

Despite making history, McCue is following at least one maritime tradition of ship captains before her.

"Well every sailor has to have a tattoo, right? So this is mine," she said, revealing hers. "This is my anchoring to keep me grounded. And then I have my compass rose, my ship's wheel, see where I'm going."