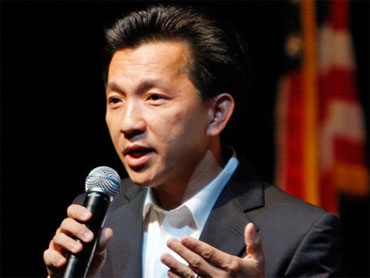 BP America President Lamar McKay probably expected to hear some harsh words from lawmakers today during his congressional testimony about the Gulf oil spill, but he probably didn't expect to hear one congressman suggest that other cultures would ask him to kill himself.

Rep. Cliff Stearns (R-Fla.) today called for McKay to resign. But during today's hearing before a subpanel of the House Energy and Commerce Committee, Rep. Anh "Joseph" Cao, the Vietnamese-American Republican who represents New Orleans, suggested a harsher form of punishment.

"Mr. Stearns asked Mr. McKay to resign," Cao said. "Well, in the Asian culture we do things differently. During the Samurai days, we just give you a knife and ask you to commit harakiri."

Harakiri is a form of ritual suicide that was practiced by samurais who committed serious offenses.

Cao said that the oil spill has wreaked economic havoc in his district, closing hundreds of businesses and leaving thousands without work. He called the clean up process a "disgrace" and said the claims process has been "dismal."

President Obama and Democrats are asking BP to set up an escrow fund to efficiently pay out claims, and the company says it is committed to paying all legitimate claims. Cao said that he has been approached by hundreds of constituents whose claims have either been rejected or delayed.

"People, when their livelihoods on the line, they cannot be delayed," he said.

A poll released today showed most people want BP to pay for all costs associated with the oil spill, regardless of whether it runs the company out of business.

Lawmakers will likely have harsh words for BP again on Thursday, when BP CEO Tony Hayward testifies in another hearing. BP officials meet with Mr. Obama tomorrow night, after tonight's primetime address in which the president will address the oil spill.