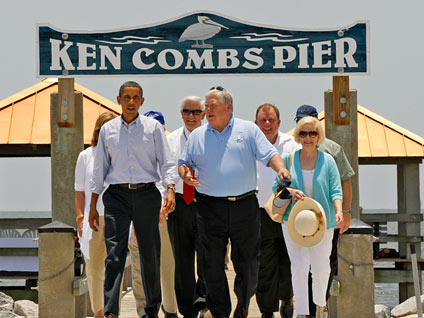 PENSACOLA, Fla. -- President Obama will receive another briefing on the oil spill response today before returning to Washington for tonight's (8 p.m. ET) major speech on the disaster. The speech will be Mr. Obama's most crucial crisis control effort since the spill erupted nearly two months ago.

His challenge: convince the public, especially the Gulf Coast region, that he's in control of the disaster response. The spill has already dominated his domestic agenda, overtaking White House plans to spotlight health care reform provisions and efforts to repair the economy.

Mr. Obama will use his first Oval Office address to outline plans to streamline the BP claims process, a source of aggravation for many people affected by the spill. The administration wants BP to establish an independently managed fund to cover economic and ecological damage claims.

White House Spokesman Robert Gibbs told CBS News' "The Early Show" this morning Mr. Obama will discuss a strategy to "take the claims process away from BP" if the oil company does not establish "an independent entity." Gibbs said the president "possesses the legal authority" to do that.

Legal observers say while that authority may be open to debate, the White House clearly has the political power to force BP's hand. It was unclear whether the administration would allow BP to choose a third party administrator to oversee the fund but a private legal source told CBS News the company has already interviewed some potential choices for the position.

The president and top aides have avoided publicly specifying the size of the fund. Deputy Press Secretary Bill Burton predicted it would run into "the billions of dollars."

Orange Beach, Alabama Mayor Tony Kennon told CBS affiliate WKRG-TV the president mentioned the possibility of a $20 billion account. The president described progress in "constructive talks" with the company. Speaking yesterday in Theodore, Alabama, he expressed hope for an agreement on an outline for claims payments when he holds a showdown meeting with BP executives tomorrow at the White House.

He said he would urge the oil company to deal "justly, fairly and promptly with damage claims." A White House official already predicts it will be a "very frank" session.

Peter Maer is a CBS News White House correspondent. You can read more of his posts in Hotsheet here. You can also follow him on Twitter.
View CBS News In