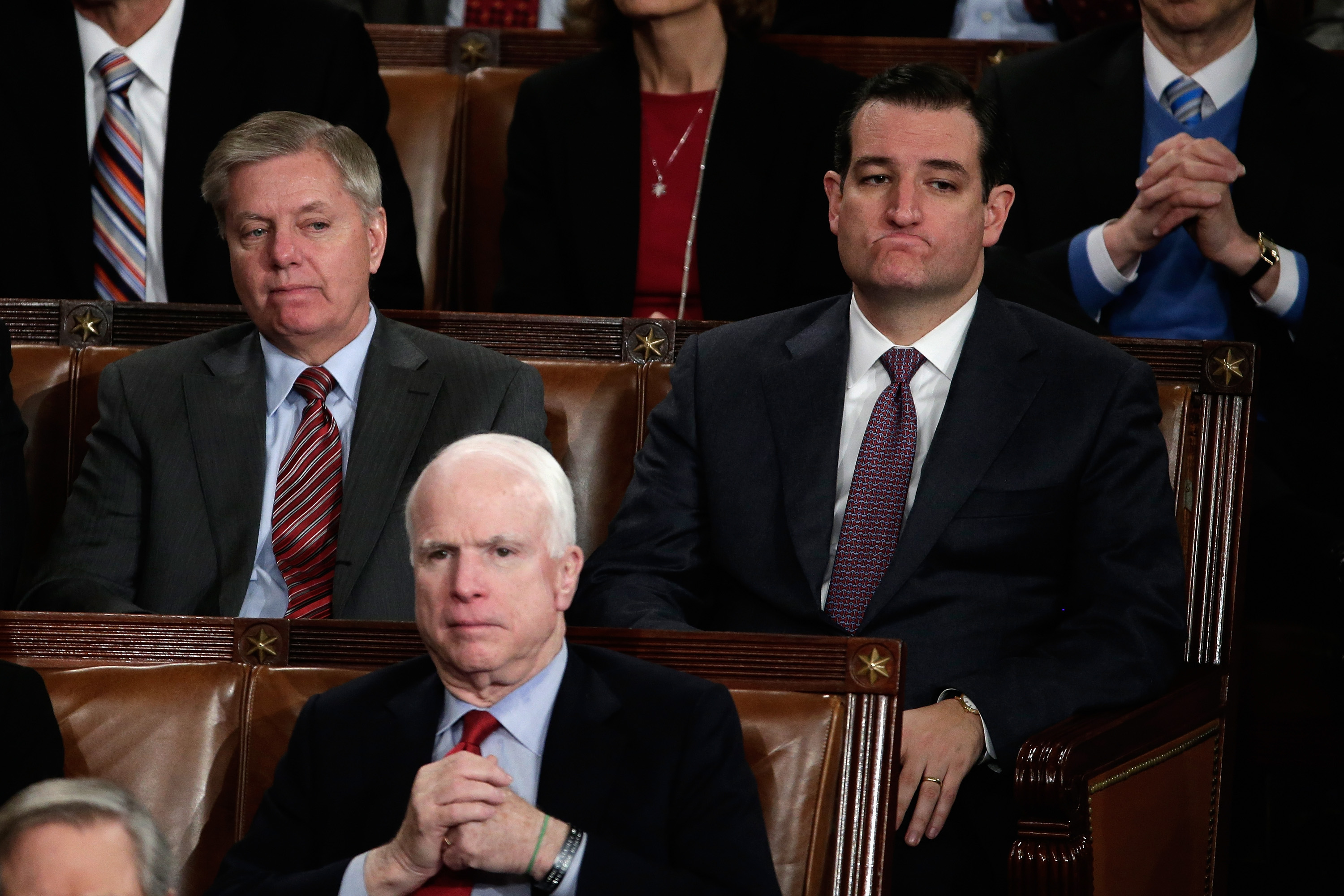 All for nothing, Sen. Ted Cruz, R-Texas, put his Republican colleagues in quite a pickle by playing hardball on the recent debt ceiling vote, Sen. John McCain, R-Ariz., said Sunday.

“I understand where Senator Cruz is coming from,” McCain told CNN. “But I allege that there was no plan. There was no plan once we had taken the United States on the brink of this financial crisis that we we're approaching.”

Congress passed an extension of the nation’s borrowing authority this week, following weeks of indecision among Republicans about how to approach the issue. GOP leaders offered a number of proposals to extract concessions from Democrats on the debt ceiling vote, but when none of the plans passed muster with the Republican rank-and-file, leaders decided to allow Democrats to shoulder the burden of passing a “clean” bill.

Rather than allowing Senate Democrats to pass the bill with their own 55-seat majority, however, Cruz insisted on a 60-vote threshold, forcing a handful of Republicans help move the bill forward. No Senate Republicans ultimately voted to pass the legislation, but Cruz’s maneuver ruffled some feathers among his colleagues who felt he forced them to take an unpopular vote without any clear strategy to pass an alternative bill.

The Treasury Department has warned that a failure to extend the borrowing authority on time could invite a default on the nation’s debt.

Shortly after the bill passed on Wednesday, Sen. Bob Corker, R-Tenn., took a swipe at Cruz’s tactics, saying the Texas Republican had no “end game.”

Corker also praised the fortitude of Senate Republican leaders who helped advance the bill, saying they demonstrated “tremendous courage,” especially given the primary fights some of them are facing in 2014.

McCain echoed that commendation Sunday. “I appreciate our leadership voting the way that they did, even though they face primary oppositions,” he said. “There was enough of us that we move forward and put this issue behind us, and now focus on Obamacare, on the economy, on many other issues, in which we think are winning issues.”

Cruz has defended his approach to the debt ceiling vote, saying Republicans should put up or shut up if they’re so opposed to extending the U.S. borrowing authority.

“I recently had my staff print out a list of three pages of Republican senators — I might note all the people that are running around the press saying nasty things about me — saying ‘We will stand on the debt ceiling and fight for it,’” Cruz told conservative radio host Mark Levin on Thursday.  “And then a few months later, it’s like they think the American people are just a bunch of rubes, that we don’t remember what they say.”

McCain and Cruz have clashed in the past, with McCain dubbing Cruz and some of his like-minded colleagues “wacko birds.” He later apologized for the label, but he’s continued to criticize Cruz’s confrontational style and tactics.

McCain also weighed in on the bloody civil war in Syria, saying the Obama administration’s attempts to defuse the conflict have been an “abysmal failure.”

Despite the disunity of rebel factions seeking to unseat Syrian President Bashar Assad – and the presence of al Qaeda extremists among them - McCain insisted there are still “viable” opposition groups who deserve stronger U.S. support.

“Yes, these foreign fighters, 7,000 of them, foreign fighters are there,” McCain said, but “There are viable options. There is a viable free Syrian army. There are people, who – there's groups that have joined together against these extremists.”

“Do not believe we are out of options,” he added. “There are many options if we have the courage to pursue them.”