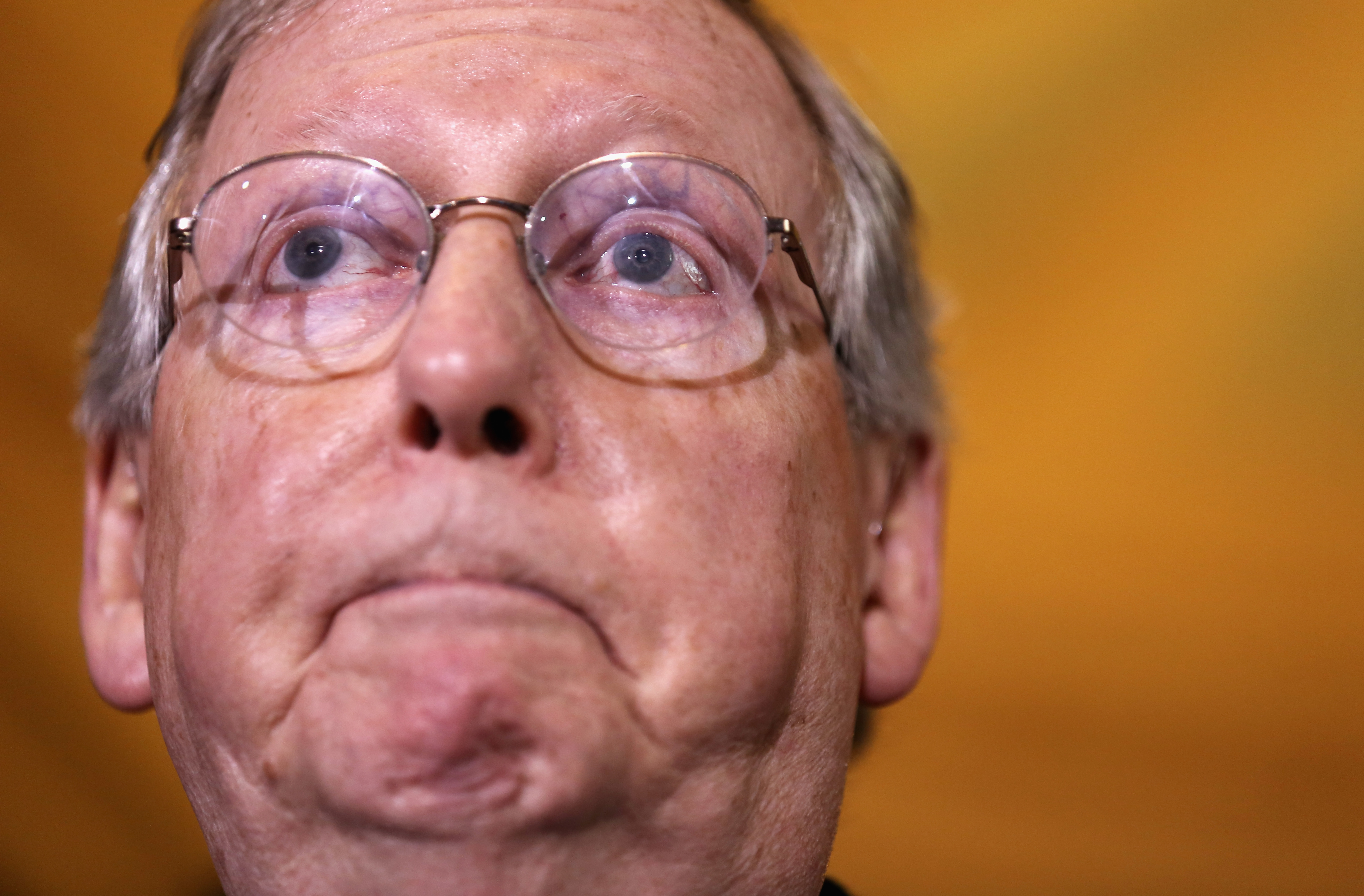 Fending off a primary challenger on his right flank ahead of what looks to be a bruising general election, the last thing Senate Minority Leader Mitch McConnell, R-Ky., needed was a high-profile vote to drive a wedge between him and his party’s base.

But that’s exactly what the Kentucky Republican got on Wednesday when he voted to advance a bill extending the nation’s borrowing authority.

Despite the fact that McConnell ultimately voted against extending Treasury’s borrowing authority when the measure came up for final passage, his primary challenger, Kentucky businessman Matt Bevin, wasted no time in thrashing the veteran senator for his heresy.

“I wish I could say I am surprised that Mitch McConnell voted to hand President Obama another blank check," said Bevin in a statement after the vote, according to Reuters. "But sadly, I am not, because this is more of the same from a career politician who has voted for bigger government, multiple bailouts, and now 11 debt ceiling increases."

The Senate Conservatives Fund, an outside right-wing group that has endorsed Bevin, reacted almost immediately on Twitter: “Mitch McConnell just voted with the Democrats to advance yet another debt limit increase. Kentucky deserves better.”

McConnell was joined in his vote to advance the debt limit bill by 11 of his Republican colleagues, including his lieutenant, Sen. John Cornyn, R-Texas. Cornyn is facing a tea party challenger of his own but is generally considered to be on safer footing than McConnell. None of the Senate Republicans ultimately voted to extend the nation’s borrowing limit.

McConnell and his 11 colleagues had Sen. Ted Cruz, R-Texas, to thank for their difficult predicament. The Texas Republican, a favorite of the tea party who has made a habit of thumbing his nose at party leaders, insisted on a 60-vote threshold to advance debate on the debt limit bill. But for Cruz’s insistence, Republican leaders could have forced Democrats to pass the bill exclusively with their own 55-seat majority.

Cruz, already on thin ice with party leaders after his instrumental role in engineering last year’s government shutdown over a budget dispute, sounded far from chastened after the vote.

“Today, Congress [gave] President Obama a blank check to keep digging the hole of debt deeper and deeper while doing absolutely nothing – nada, zero – to address the underlying problem of out of control spending,” he told reporters. “Today was a classic victory for Washington establishment interests, and the people who lost today were the American people, who find the fiscal and economic condition of this nation even worse because of a lack of leadership in Washington.”

“It should have been a very easy vote,” he added. “In my view every Senate Republican should have stood together.”

Some Senate Republicans leapt to their leaders' defense, though, praising their courage in the face of a difficult decision.

“McConnell and Cornyn voted in a responsible way under the circumstances,” said Sen. Bob Corker, R-Tenn. “And hopefully, people will understand that McConnell, especially, in an incredibly tough race – the toughest Republican race in the country – had the courage to vote the way the vast majority of everybody understood the vote needed to occur. So he did that. I think it shows tremendous courage on his part.”

Corker also took a veiled swipe at Cruz and Sen. Rand Paul, R-Ky., for forcing GOP leaders into a corner without offering a contingency plan.

“We could have had a 50 vote threshold,” he said. “We had two of our members that would not allow that to happen. There was no end game there.”

Asked if other Senate Republicans were irritated with Cruz, according to the Associated Press, Sen. Orrin Hatch, R-Utah, offered only a terse demurral. “I’m not going to talk about that," he said.

The bill, which extends the nation’s borrowing authority for roughly 13 months, is now headed to President Obama’s desk for his signature. Its relatively smooth passage was seen as a victory for congressional Democrats, whose last few attempts to raise the debt ceiling were attended by Republican demands for deep spending cuts and structural budgetary reforms.