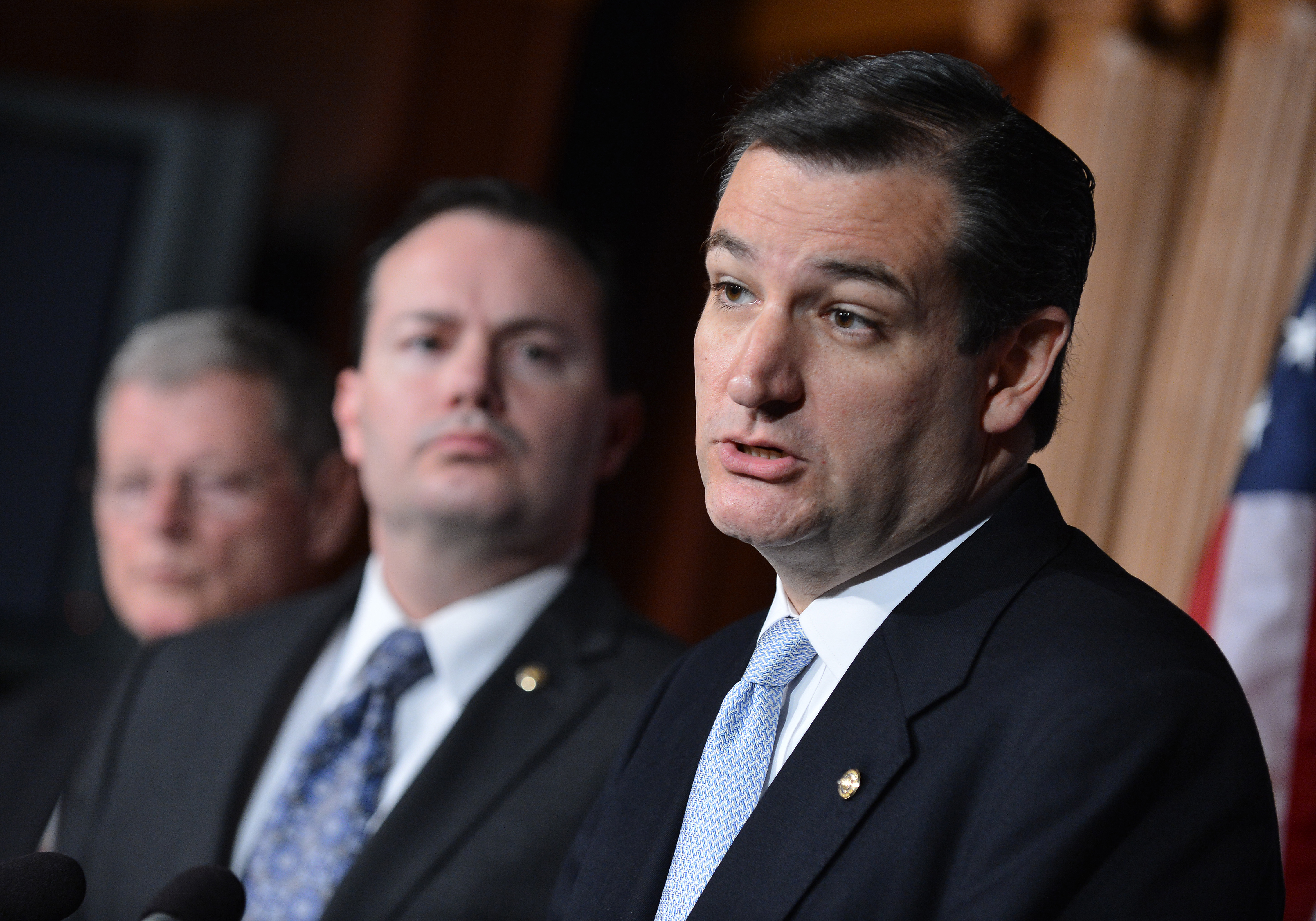 Sen. Ted Cruz doesn't have as many friends as he says he does. In the latest round of Cruz's simmering debate with Sen. John McCain (who labeled Cruz a "wacko bird"), Cruz spoke of "my friend, the senior senator from Arizona" while painting him as out of touch with his party and country. It usually takes a while for senators to learn how to weaponize compliments and imprecations of friendship, but Cruz is a quick study. After a patient attack on McCain's understanding of history, Cruz said: "I know my friend from Arizona is well aware of that because he is such an esteemed historian of this body." Like use of the word "frankly," which in Washington means just the opposite, Cruz's sentence is best read in reverse: McCain is neither a friend, esteemed, nor a historian. (He is still, however, from Arizona.)

Do you need friends in the Senate anymore? Ted Cruz, Sen. Rand Paul of Kentucky, and Sen. Mike Lee of Utah are testing this theory in new ways. The power of Tea Party activists in Republican politics, the public's low esteem for Congress, and structural changes in the Senate like the elimination of earmarks and the weakening of appropriations power have created more incentives for senators to get by without a little help from their friends.

Cruz has had a series of run-ins with his colleagues since being sworn in only four months ago. He battled Democratic Sen. Dianne Feinstein over gun control, his Senate Republican colleagues over a threat to filibuster gun legislation; and most recently he tangled with McCain and Republican Sen. Susan Collins over budget procedure. He wears the dustups as a badge of honor. "Count me a proud wacko bird," he told an approving audience at the Conservative Political Action Conference, referring to McCain's jab.

There was a time when a new senator could not have survived such a controversial start. "The making of a good senator is in some ways similar to the making of a good work of art," William White wrote in 1956 in Citadel: The Story of the U.S. Senate. "There are few shortcuts." Lyndon Johnson gave a copy of the book to freshman senators. It advised that a career rested "upon what is slowly developing and enduring ... rather than what is quick and spectacular. Eminence may be reached by a concentration on frenetic and untypical senatorial activity, but it will never be sustained in that way."

Ted Cruz didn't read that book, and even if he did, he's decided to write his own. Though his colleagues have suggested he tone down his hard charging approach, he continues to engage with verve on multiple fronts.

White's description of the Senate described the institution before an ambitious John F. Kennedy vaulted to the presidency after serving only one term, beating out Senate lion Lyndon Johnson and other Senate veterans for his party's nomination. A politician no longer had to build up a Senate career to make a national name. Sen. Barack Obama marked the final evolution of this theory. Sen. Ted Kennedy advised him to run soon lest he get too weighed down with associations to the Senate. Now Sens. Marco Rubio, Paul, and Cruz see the Senate cloak room as the waiting room to the Oval Office.

Cruz's constituents at home like his brand of truth telling. They sent him to Washington to ruffle feathers. He is seen as a patriot fighting for the right cause. Fans delight in his rhetorical flourishes, like his recent comparison of Senate debate to the argument among warring factions in Gulliver's Travels over which end of the boiled egg to crack first before eating.

To join a club and immediately use it as a foil is seen as bad manners by Senate veterans. To portray your colleagues as sniveling weasels is seen as bad form. And, as one longtime Senate aide pointed out, it's also probably worth pausing before telling John McCain you're the one fighting for liberty when McCain actually did.

Cruz is at liberty to be himself because he doesn't need establishment Republicans; he can raise all the campaign cash he requires from the grass-roots. He doesn't need help from leadership to orchestrate votes that will help him with moderates in his state because there aren't enough moderates in Texas to make it matter. Other Tea Party favorites such as Sen. Pat Toomey of Pennsylvania and Sen. Ron Johnson of Wisconsin take a different approach. They will both be up for re-election in blue states in a presidential year, which means Democratic turnout will be high, so they'll need all the establishment help they can get (if they don't face a Tea Party primary first). These senators are counter-examples to Cruz and company: principled conservatives who aren't irritating their colleagues.

In the old Senate, Cruz would have curbed his enthusiasm because he might have wanted to bring pork home to his state and he'd need help from his colleagues to do that. Earmarks are now mostly gone. But there are still dangers lurking for Cruz and others in the purity caucus. Though Barack Obama moved through the Senate quickly, he used it as a platform for bipartisan platform building. That's what you need to do to win a national election in a diverse country. Cruz is pursuing the opposite strategy. It may win him cheers at home, but that puts him on track toward becoming this generation's Phil Gramm, the Texas senator whose effort to build a conservative platform from within the Senate made him unappealing as a national candidate.

Fellow conservatives worry that Cruz in particular, and Paul and Lee to a lesser extent, are harming the conservative brand. As a talented speaker with a knack for the limelight--who is now getting invitations to key primary states--Cruz gets media attention which elevates his clashes. When he treats a respected veteran senator like Dianne Feinstein like a dope, it makes all conservatives look bad.

This isn't just about image. More established Republican senators argue that there are strategic downsides to the behavior of the firebrand freshmen. During the debate over gun control, the Wall Street Journal criticized Cruz, Paul, and Lee for giving Democrats a tactical victory by threatening a grandstanding filibuster. Cruz then earned a second critique from the Journal for overplaying his role and portraying himself in a way that belittled others in the cause: "Normally we'd ignore this insider politics, but Senators Cruz and Paul have been declaring for all to hear that they and a few others are the only conservatives of principle in politics."

The nightmare scenario that one Republican aide paints is that Cruz, Paul, and Lee allow Democrats to portray the party as hopelessly obstructionist and use it to make the public case for the "nuclear option," a procedural move that would allow Democrats to override the filibuster with simple majority votes. If this extreme scenario came to pass, it would dilute the power of all Republican senators because they would effectively lose the power to filibuster.

At issue in the marching career of Ted Cruz is whether nodding to the niceties of the Senate is an act of capitulation or a requirement if you are hoping to score long-term victories. I spoke to Sen. Tom Coburn of Oklahoma this week about a wide variety of topics. He is as principled a conservative as you can find in the Senate, and he is more eloquent than Cruz about the venality of career politicians. But Coburn can also talk about the power of human relationships in politics in a way that seems antithetical to the brand of politics pursued by Cruz. "Relationships are how deals get done," said Coburn, who in this case was talking about President Obama. He's been friendly with Obama since 2005, the year they both arrived in the Senate. This is a constant source of confusion for Coburn's constituents. "The No. 1 question I get at home is: Why are you friends with Barack Obama?" Coburn's answer, as Obama wrote in his essay about him for Time, is, "How better to influence somebody than to love them?" It's hard to imagine Ted Cruz talking that way.