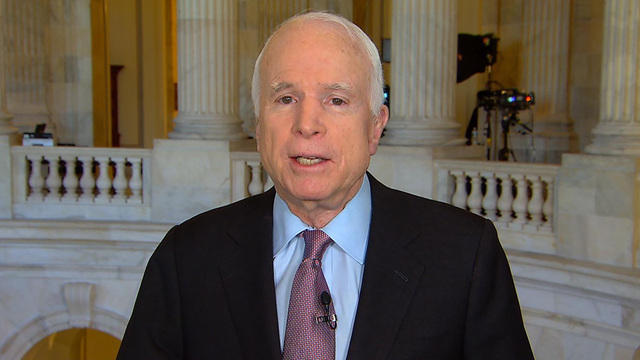 Sen. John McCain said Tuesday that President Trump’s decision to back away from the Trans-Pacific Partnership (TPP) is “harmful” to the U.S. and will empower China more economically.

“I have talked to leaders of Asian countries who have all said that this will cede the field to China. That, to me, is not good for the United States of America,” the Arizona Republican said in an interview on “CBS This Morning.”

“I believe this is harmful and over time, this will give the Chinese a greater domination economically and with some of their behavior patterns,” he added.

McCain said he’s concerned that the U.S. is now “stepping back” at a time when he said 60 percent of the world’s economy is in the Asia-Pacific region. In a largely symbolic move on Monday, Mr. Trump signed a presidential memorandum that withdrew the U.S. from TPP.

On Mr. Trump’s desire for better relations with Russia, McCain said that the U.S. must still stand up to its government.

“All of that is fine, but it has to be done from a position of strength,” McCain said. “It cannot acknowledge and legitimize Russian behavior” such as the taking or Crimea and partitioning of Georgia. McCain added that the U.S. must stand against Russia in Syria where he said its warplanes are using precision weapons to strike hospitals in Aleppo, killing thousands of people.

Asked to explain his decision to support Mr. Trump’s secretary of state nominee, Rex Tillerson, McCain said, “I still have some concerns, but I’m willing to give Mr. Tillerson a full opportunity to act as our secretary of state in what I would argue is the most challenging times in 70 years.”

“The team that the president has surrounded himself with is outstanding...that gives me confidence,” he said.

E-waste: How big of a problem is electronic waste?
Rebecca Shabad