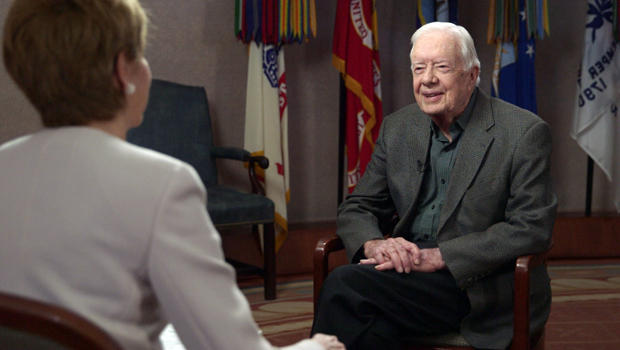 The White House has updated former President Jimmy Carter on developments in North Korea and he is willing to help if needed, he tells Jane Pauley in an interview for CBS' "Sunday Morning," to be broadcast March 25.

Mr. Carter, who earned a Nobel Peace Prize for his humanitarian work, told Pauley he has had about 20 hours of discussion with top leaders in North Korea during his career.

"And I understand what they want and need," President Carter said during an interview shot earlier this month in Georgia.  "And just this week, I had a representative from the White House who came down and gave me the latest developments with North Korea."

Mr. Carter, 93, has been active in international affairs since leaving the White House, and would be willing to travel to North Korea for President Donald Trump, if asked.

"I have had some criticisms of some of the public statements that President Trump has made about 'fire and brimstone' and that sort of thing being utilized," Mr. Carter said, adding that the president has "reacted quite well" to word that North Korea wants to talk.

In the interview, the former president also opens up about his life; his work after leaving the White House; his new book, "Faith: A Journey for All," from Simon & Schuster (a CBS company); and how he faced a deadly cancer diagnosis.

In 2015, Mr. Carter was told he had just a short time to live because cancer in his liver had spread to his brain. He readied himself for the end and said his goodbyes to friends and family. "I was surprised at how easily I took it," he said. "You know, just acknowledged that I had a few days to live."

That was three years ago. After a successful experimental treatment, the cancer has not returned.

BOOK EXCERPT: Jimmy Carter's "Faith: A Journey for All"