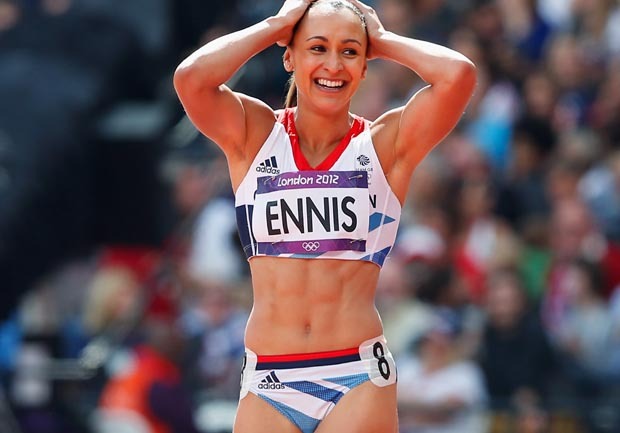 (AP) LONDON - Jessica Ennis kicked off the London Olympic athletics meet with an electrifying run, energizing the jam-packed stadium and her British teammates Friday with the fastest 100-meter hurdles ever run in the heptathlon.

Competing in front of a sea of Union flags, with relentless cheering and British rock music pounding, she later beat world champion Tatyana Chernova and defending champion Natallia Dobrynska in the high jump to conclude the morning session in the lead.

After two of seven events, 2008 silver medalist Hyleas Fountain was her closest chaser, with Dobrynska in 12th and Chernova in 16th position.

"It was such an amazing feeling. It kind of gives you goosebumps," Ennis said.

Ennis has been cherished in the host nation for years as perhaps the best chance for gold in athletics at the Olympics, and the crowd let it be know the wait was finally over. She lived up to those expectations immediately as she shot out the blocks of her first event.

Thousands of fans waved the British flag and gave Ennis a huge ovation when she was introduced for the last heat of the hurdles and she responded with a time of 12.54 seconds, beating the previous best in a heptathlon of 12.62 by Eunice Barber of France in 2005.

She held her hands over her face in disbelief as the time showed on the big screen, realizing she had sliced one-quarter of a second off her best time and set a national hurdles record in the process.

"I literally cannot believe that. That's crazy. So crazy," Ennis said. "I'm just so glad I did it here and did it in the heptathlon, where I needed it most."

Her time Friday equaled the gold-medal performance by Dawn Harper in the 100 hurdles at the 2008 Beijing Olympics.

"I had to get a bit closer to the screen to doublecheck the time. Those sort of things are amazing for team morale," Britain team captain Dai Greene said.

Athletes from everywhere were inspired.

"You saw Jessica Ennis in the 100? Everybody in the back was kind of buzzing," U.S. 400-meter runner Sanya Richards-Ross said.

Ennis knew she had to perform strongly on the opening day of the heptathlon, considering her worst of the seven events are on Saturday.

Her hurdles race came barely half an hour into the opening day of the athletics program, but the crowds had already filled the 80,000-seat stadium. With spectators flooding into London Olympic Park for the athletics, swimming and other sports, there were long queues for transport and entry. London also turned on a heavy rain shower but it cleared away during the opening session.

There were cheers as soon as Ennis appeared on the giant screens setting up her blocks. At first, she timidly waved and flashed a nervous smile. Once she crossed the line, her face was beaming.

Even though she extended her lead over Dobrynska and Chernova with a successful jump of 1.86 meters, it was far short of her best of 1.95 in that discipline.

"Would have loved to gone higher in the high jump, but not too bad," Ennis said. The shot put and the 200 meters concludes the first day of heptathlon.

With 2,249 points, she held a 25-point lead over Fountain. Dobrynska was already 193 back and Chernova 218. It amounted to a gap she could only have dreamed coming into the games.

The red-white-and-blue flags were out in force again when Greene won his heat in the 400 hurdles. He is expected to be a top challenger to Puerto Rico's Javier Culson, who also won his heat.

Noor Hussain Al-Malki, one of the first four women ever selected by Qatar for the Olympics, barely got out of the blocks at the London Games in the 100 preliminaries. Wearing a headcovering and full length sleeves, the 17-year-old sank to the ground after some 15 meters and clutched her right hamstring in pain before she was taken away in a wheelchair.

The top favorites in the shot put easily went through into Friday evening's final, with Reese Hoffa of the United States leading the way with 21.36, just ahead German world champion David Storl with 21.15.