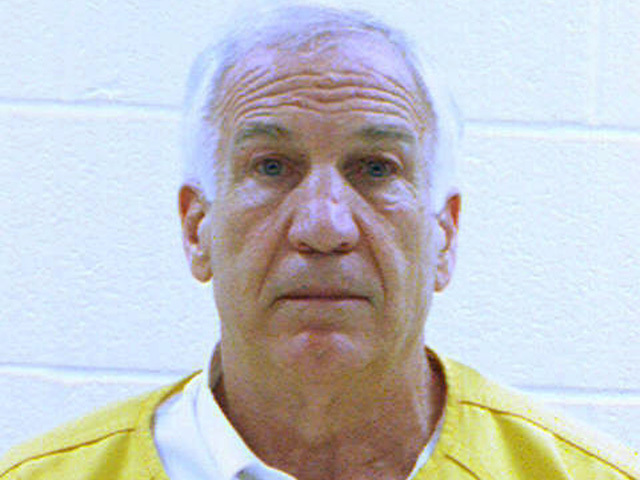 (CBS/AP) A jury found Jerry Sandusky guilty Friday in his child sex abuse trial, believing prosecutors' portrayal of him as a serial molester who groomed his victims and not finding reasonable doubt in his defense lawyer's assertions that the former Penn State assistant football coach was being victimized by an overzealous prosecution and greedy accusers.

It was a swift and emphatic end to a case that shattered Penn State University's Happy Valley image and brought down Hall of Fame football coach Joe Paterno.

Sandusky showed little emotion as the verdict was read. The judge ordered him to be taken to the county jail to await sentencing in about three months.

Sandusky, a 68-year-old retired defensive coach who was once Paterno's heir apparent, was found guilty of 45 of 48 counts. He faces the strong possibility of life in prison.

In court, Sandusky half-waved toward family as the sheriff led him away. Outside, he calmly walked to a sheriff's car with his hands cuffed in front of him.

As he was placed in the car, someone yelled at him to "rot in hell." Others hurled insults and he shook his head no in response.

Almost immediately after the judge adjourned, loud cheers could be heard from a crowd of more than 200 people gathered outside the courthouse as word quickly spread that Sandusky had been convicted. The group included victim advocates and local residents with their children. Many held up their smartphones to take pictures as people filtered out of the building.

Eight young men testified that they were abused by the former Penn State assistant football coach, and jurors also heard about two other alleged victims through other witnesses, including another former coach.

Sandusky did not take the stand in his own defense.

He had repeatedly denied the allegations, and his defense suggested that his accusers had a financial motive to make up stories, years after the fact. His attorney also painted Sandusky as the victim of overzealous police investigators who coached the alleged victims into giving accusatory statements.

But jurors believed the testimony that, in the words of lead prosecutor Joseph McGettigan III, Sandusky was a "predatory pedophile."

One accuser testified that Sandusky molested him in the locker-room showers and in hotels while trying to ensure his silence with gifts and trips to bowl games. He also said Sandusky had sent him "creepy love letters."

Another spoke of forced oral sex and instances of rape in the basement of Sandusky's home, including abuse that left him bleeding. He said he once tried to scream for help, knowing that Sandusky's wife was upstairs, but figured the basement must be soundproof.

Another, a foster child, said Sandusky warned that he would never see his family again if he ever told anyone what happened.

And just hours after the case went to jurors, lawyers for one of Sandusky's six adopted children, Matt, said he had told authorities that his father abused him.

Matt Sandusky had been prepared to testify on behalf of prosecutors, the statement said. The lawyers said they arranged for Matt Sandusky to meet with law enforcement officials but did not explain why he didn't testify.

"This has been an extremely painful experience for Matt and he has asked us to convey his request that the media respect his privacy," the statement said. It didn't go into details about his allegations.

Defense witnesses, including Jerry Sandusky's wife, Dottie, described his philanthropic work with children over the years, and many spoke in positive terms about his reputation in the community. Prosecutors had portrayed those efforts as an effective means by which Sandusky could camouflage his molestation as he targeted boys who were the same age as participants in The Second Mile, a charity he founded in the 1970s for at-risk youth.

Sandusky's arrest in November led the Penn State trustees to fire Paterno as head coach, saying he exhibited a lack of leadership after fielding a report from then-graduate assistant Mike McQueary. The scandal also led to the ouster of university president Graham Spanier, and criminal charges against two university administrators for failing to properly report suspected child abuse and perjury.

Sandusky had initially faced 52 counts of sex abuse. The judge dropped four counts during the trial, saying two were unproven, one was brought under a statute that didn't apply and another was duplicative.

The accuser known in court papers as Victim 6 broke down in tears upon hearing the verdicts, and a prosecutor embraced him and said, "Did I ever lie to you?"

The man, now 25, testified that Sandusky called himself the "tickle monster" in a shower assault. He declined to comment to a reporter afterward, but his mother said: "Nobody wins. We've all lost."