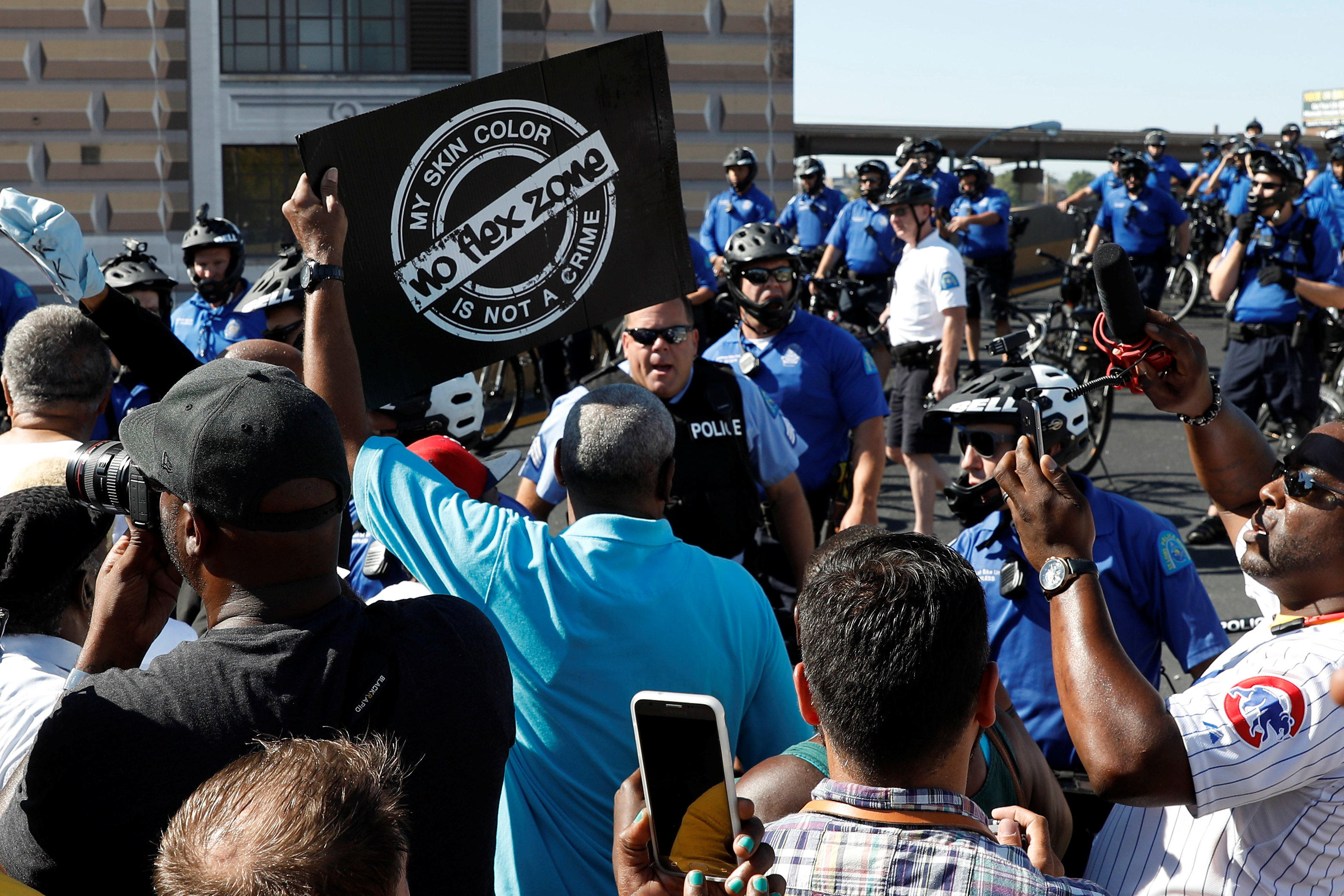 ST. LOUIS -- Dozens of protesters faced off with police in riot gear in downtown St. Louis Friday after a judge acquitted former police officer Jason Stockley, who is white, was not guilty of first-degree murder in the 2011 death of 24-year-old Anthony Lamar Smith, a black man.

Stockley shot Smith five times after a high-speed chase. Prosecutors alleged Stockley planted a gun in Smith's car after he shot him.

According to KMOV-TV, police arrested 13 people, including 12 directly in front the old police headquarters, after protesters clashed with police. Four officers were injured as well, one received medical attention for an injured hand, the other three refused treatment.

St. Louis police chief Lawrence O'Toole later said at a press conference that "for the most part," the demonstrations were peaceful. But the police department released video of protesters jumping on a police car and tweeted photos of water bottles and rocks through at officers.

"I would say that all in all today's protests were very peaceful and the police exercised great restraint. That is a good outcome for a very tense day," O'Toole said.

A smaller group stood in front of a city bus filled with officers in riot gear, blocking it from moving forward. The bus backed up and protesters again tried to stop it, with a few throwing water bottles. The bus moved less than a block before police in riot gear began pushing back the crowd.

KMOV-TV posted a video from Twitter that showed an altercation between protesters and police. Protesters attempted to block a bus carrying officers, according to KMOV-TV.

KMOV-TV tweeted a video of some protesters burning an American flag.

Smith's mother, Anne Smith, spoke Friday near the intersection where her son was killed, KMOV-TV reports.

"I'm not going to stand here and say 'no justice, no peace.' My soul is burning, my heart is broken. I say I ain't get no justice, I could never be at peace," Anne Smith said. "I can't speak for no one else, but I know the system didn't work on behalf of Anthony Lamar Smith."

Hundreds of protesters marched in downtown St. Louis immediately following the verdict, some protesters shouted, "If we can't get no justice y'all can't get no peace" and burned a St. Louis Cardinals sweatshirt, according to a reporter for CBS St. Louis affiliate KMOV-TV. At 7 p.m., protesters gathered at Maryland Plaza to organize another march.

The St. Louis police tweeted just after 6:30 p.m. that the protests are "no longer considered peaceful" and protesters were ignoring commands to leave the streets -- and therefore subject to arrest.

As protesters resisted, two women told The Associated Press that police used pepper spray. Both women's faces had been doused with milk, which is used to counter the effects of pepper spray.

The police also said on Twitter that rocks were thrown at buses carrying officers and a man was arrested for damaging a police vehicle.

Protester efforts at civil disobedience were largely unsuccessful. When several demonstrators tried to rush onto Interstate 64, they were blocked on an entrance ramp by police cars and officers on bikes. When they tried to enter the city's convention center, the doors were locked.

The case played out not far from the suburb of Ferguson, which was the scene of the fatal shooting of Michael Brown, the unarmed black 18-year-old who was killed by a white police officer in 2014. That officer was never charged but eventually resigned.

Stockley insisted he saw Smith holding a gun and felt he was in imminent danger. The officer asked the case to be decided by a judge instead of a jury.

Wilson said he was not convinced of Stockley's guilt. And as for Smith, the judge wrote that "an urban heroin dealer not in possession of a firearm would be an anomaly," CBS News' Dean Reynolds reports.

"While officer-involved shooting cases are extremely difficult to prevail in court, I believe we offered sufficient evidence that proved beyond a reasonable doubt" that Stockley intended to kill Smith, Gardner said in a written statement.

The head of the St. Louis chapter of the NAACP asked President Trump and the Justice Department to review the acquittal.

Assistant Circuit Attorney Robert Steele emphasized during the trial last month that police dashcam video of the chase captured Stockley saying he was "going to kill this (expletive), don't you know it."

Less than a minute later, the officer shot Smith five times. Stockley's lawyer dismissed the comment as "human emotions" uttered during a dangerous police pursuit. The judge wrote that the statement "can be ambiguous depending on the context."

Prosecutors objected to the officer's request for a bench trial.

The Constitution guarantees the right of criminal suspects to have their cases heard "by an impartial jury." But defendants can also opt to have the verdict rendered by a judge.

Stockley, 36, could have been sentenced to up to life in prison without parole. He left the St. Louis police force in 2013 and moved to Houston.

Stockley is the fourth officer in the last four months to be acquitted of murder charges involving a black victim, Reynolds reports.