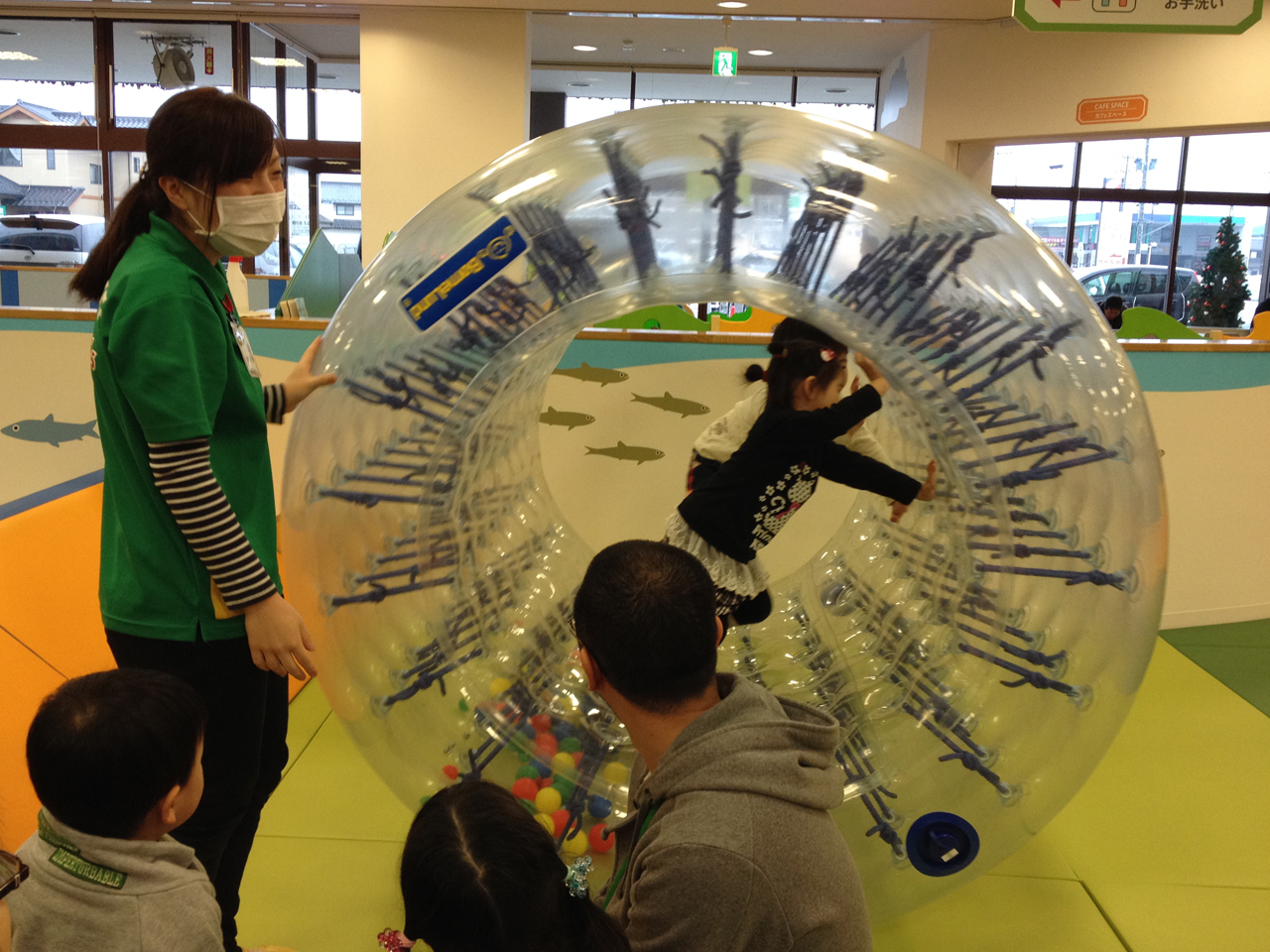 KORIYAMA CITY -- As indoor play centers go, "Pep Kids Koriyama," in a former supermarket warehouse, is nothing short of lavish. The free, public facility is equipped with a jogging track, obstacle course, playhouse, and a mind-numbing set of equipment to climb, jump, swing from and gerbil-run on.

But the jewel in the crown at Pep Kids is an enormous sandbox -- complete with running water -- where kids happily run around barefoot, burrowing and making mud pies.

Japan's Fukushima prefecture may be the only place on earth where shoveling sand is considered a luxury.

Customers are limited to 90 minutes per visit, but even with frequent turnover, demand is so high on weekends the facility invariably hits its capacity 600 users, who frolic within walls painted to remind them of the once-pristine trees, mountains and lakes of Fukushima.

About 40 miles east of the Fukushima Daiichi nuclear plant, Pep Kids was dreamed up shortly after the accident; as a desperately needed oasis for preschoolers and elementary age students whose world had become a no-man's land.

More
Three years after the earthquake, tsunami and ensuing nuclear disaster hit Fukushima, kids should have returned to the parks and playgrounds in much of the prefecture. But fair weather or foul, the indoor center remains packed -- and the streets of Fukushima, once alive with kids on bicycles and playing fields, are still unnaturally quiet.

A spokesman for Koriyama's decontamination unit said the city "has no restrictions" on outdoor activities. Visitors to the city website can check radiation levels at 394 monitoring points within city limits. On the day of writing, levels ranged from 0.1 to 0.487 millisieverts (Outside Pep Kids, with its own monitoring post, registered 0.118.)

Radiation levels in Koriyama are about ten times higher than before the accident -- average yearly exposure in the city is around 2.6 millisieverts, beyond the 1 millisievert recommended annual exposure, but well within the 20-millisievert limit set by the International Commission on Radiological Protection. The ICRP says there is no statistically higher cancer risk with exposure levels under 100 millisieverts.

These distinctions are cold comfort for parents like Keiko Kobari, who brought her six-year-old son to the play center. "He's not free to play outside where he wants. He has to avoid soil, and puddles."

Simple pleasures like jumping in a pile of leaves, splashing through the rain, or exploring the woods are considered too risky by many parents.

"Kids are more stressed out than we are," she said. "They don't understand why they can't just go out and play."

Particularly fearful parents obsessively monitor their own gardens and drainage pipes. In warmer months, outdoor swimming pools change their water every day, and even then, kids may be limited to a half-hour dip.

"Anyone who could leave, has left," a taxi driver told us, repeating a local mantra. Figures released last month by the Reconstruction Agency found that the number of disaster refugees still living outside the prefecture has fallen, but 48,000 Fukushima residents are still choosing to live elsewhere.

"A lot of my neighbors are gone," said Yukie Tsumuraya, another mom at the play center. "There are many empty houses, or houses with only the father at home, while mom and kids live somewhere else." The strain, parents say, has ruptured some families for good.

Well-founded or not, the perceived radiation threat continues to haunt many parents here, and that has manifested itself in a disturbing health trend; while Japanese kids generally are slim, in Fukushima, kids are getting fatter.

Figures released by the Ministry of Education in 2013 found that Fukushima school children in every age group ranked at or among the worst in the nation for weight problems -- with some age groups at double the national average.

"Since the nuclear accident, parents are shuttling their kids to school instead of letting them walk, and not allowing them to play outside," an official with the prefecture's education and health department told the Sankei newspaper. "And kids are also dealing with stress by overeating."

While public schools have lifted restrictions on playground activity imposed right after the accident, health experts say it will take time for kids to shed the extra weight -- a process exacerbated by parents who continue to keep their kids cooped up indoors when they're not at school.

"My daughter has gained about five kilos (10 pounds)," said Akemi Sato, a mother of two who lives in Koriyama. "She just watches videos or plays video games."

Sato was on hand for a networking event recently in the neighboring town of Sukagawa. It was the kind of gathering which has become common since the nuclear accident: nonprofit groups outside Fukushima offering low-cost options for rest & relaxation to Fukushima families.

Sato takes her kids, in fourth grade and nursery school, away from Fukushima every chance she can, and on a recent Sunday spoke with a group of volunteers from Niigata, on the Sea of Japan, who offered the use of their two-story wooden house for a token fee of about $10 a night. The pitch started with basics like kitchen facilities and sightseeing, but quickly devolved into an emotional counseling session.

"I want the old Fukushima back!" Sato wailed, fighting back tears. "We had the beach, the lake, the mountains -- It was perfect for recreation. It was a great place to raise kids. Now, we can't do anything."

At the lunch counter nearby, Eri Gunji fed her daughters plates of curried rice as she hunted for her next escape. She and her husband, a postal worker, are anxious to leave the prefecture for good - a sentiment she tries to keep to herself.

"People are resented for leaving," she said. "It's become taboo - people avoid the subject."

As for Sato, leaving isn't an option for her family, so these brief trips are her only respite from anxiety.

On trips away from Fukushima, "the kids sleep better. When they get to play outdoors, they look different," she said. "They come alive."