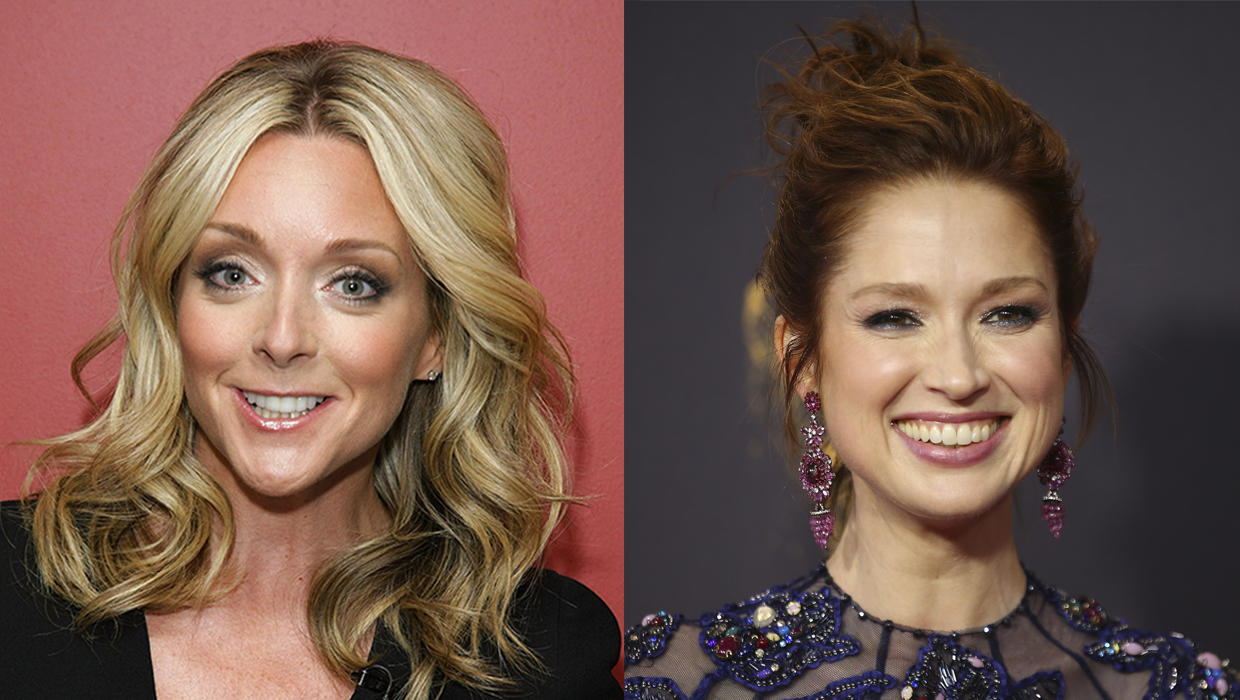 Jane Krakowski and Ellie Kemper make a hilarious team on "Unbreakable Kimmy Schmidt," and now the actresses have become the first female comedic duo to star in new commercials for Sonic. Krakowski tells CBS News that she loves her comedic chemistry with Kemper, but reveals that their first meeting was a bit awkward.

"I never met Ellie until we shot our first scene on 'Unbreakable Kimmy Schmidt' and our first scene -- it's always the way it is -- it was a bed scene," she says. "We had to spoon each other. They always do that! You're always doing a bed scene first."

But Krakowski says their rapport was instant.

"I think immediately, Ellie and I had a comedic banter and great timing," she says. "You don't know when you hire actors separately. I have a great adoration and respect for Ellie, having worked with her for four years." Krakowski says she's hoping to keep collaborating with her co-star. She adds, "Whenever I get back together with Ellie, it feels like home, and I'm like, 'Yes, this was the timing and dynamic that got us here!' So it's always fun for me."

Krakowski says she and Kemper had the chance to improvise in their Sonic commercials together.

"They gave us free range to sort of bring whatever comedic ideas we had to the car, and there was a structure of what the commercial was, so we knew the topic, but we were definitely given an opportunity to improvise in the car," she says. The two men known for starring in Sonic commercials, T.J. Jagodowski and Peter Grosz, are seasoned improvisers with Upright Citizens Brigade.

"Absolutely zero," she reveals. "There is none. Our writers take such care and time to structure each joke, they've written it the best way it can possibly be done, so we always film it exactly as it is on the page." She says that the times the actors have tried to improvise are never as funny as what the writers have created.

Krakowski also confirms they're having fun behind the scenes of the Netflix comedy. "There is a lot of laughter on our set," she says. "That always, always makes the day go by faster and is always great to have on the set."

But in the latest season, "Unbreakable Kimmy Schmidt" tackles a serious issue: the #MeToo movement. Kimmy, whose backstory is that she spent 15 years in a bunker after a man kidnapped her, holds a deep connection to the movement.

Krakowski says, "On a show on a streaming platform like we are, we miss a lot of the biggest conflicts that are going on in the world because of the nature of the timing of the delay of when the show comes out."

She continues, "We don't normally have the opportunity to do certain topics, so it's been fun seeing how Tina [Fey] and Robert [Carlock] and the writers of our show have been able to incorporate the #MeToo and Time's Up movement into this season through Kimmy's eyes. I've been very pleased and taken with how they've represented it."

Krakowski says she's also happy with the way her character, Jacqueline White, has grown over the years.

"All of the main four characters kind of have a bunker of their own, and Jacqueline has changed because she's worked very hard to get her gilded castle or cage, which became a bunker, and now she's gotten her way out, like Kimmy, and is living a whole new life," she explains. "I think all the characters have found their way and we're still filming the last four or five episodes that will be 'Unbreakable Kimmy Schmidt,' so every day becomes very special and each scene you get to do has a touch of sweetness."

The first half of the fourth and final season is currently on Netflix, and the final four episodes will air in January.