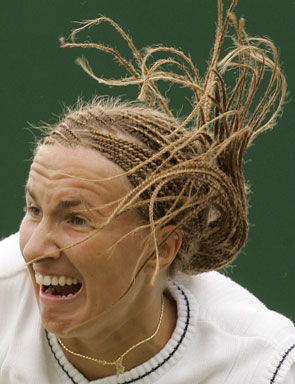 This report originally was broadcast in 1998.

In a sun-baked, low-rent suburb of The City of Angels, she was found on a Sunday morning, reports CBS News Correspondent Anthony Mason for CBS News Sunday Morning.

The redhead had been dumped by the roadside. Some Little Leaguers discovered the body. As Ellroy describes it: "A nylon stocking and a cotton cord were lashed around her neck. Both ligatures were tightly knotted."

The victim was a 43-year-old divorced nurse. A mother. Her son: 10-year-old James Ellroy, the day the policeman bent down to tell him, "Son, your mother's been killed."

Jean Ellroy's boy saw crime in his daydreams and nightmares. Murdered women obsessed him. They haunt his crime novels: "The Black Dahlia," "The Big Nowhere," "L.A. Confidential," "White Jazz". They all betray a secret underside of L.A. But for many years, Ellroy left one dark place unexplored: His own mother's murder.

In his book "My Dark Places," Ellroy finally confronted the truth that fires his fiction. In the book's prologue, he writes: "Your death defines my life. I want to take your secrets public. I want to burn down the distance between us. I want to give you breath."

To reopen the file of Geneva Hilliker Ellroy, Ellroy enlisted the help of a retired detective, Bill Stoner from the Los Angeles County Sheriff's Unsolved Crimes Unit, who says of the job: "I knew it would be, if anything, near impossible."

Their investigation took them to a place Ellroy had never been: the place where his mother's body was found. It was a side street in Elmonte by Arroyo High School where Jean Ellroy's body was discovered:

For a year and a half, the crime writer and the cop tried to reconstruct Jean Ellroy's final hours.

"My mother," says Ellroy, "was a richly ambiguous, complex, tormented woman. She liked liquor, Early Times bourbon, L&M cigarettes, and cheap men. She also liked Brahms symphonies. She also sent me to church, made me do my homework, and fought very hard to keep me from becoming the weak man she married."

Ellroy himself became a richly ambiguous and tormented man. But in his youth, in L.A.'s wealthy Hancock Park neighborhood, Ellroy began to break into houses of school girls he obsessed over: He would steal underwear and medications. But he never got caught for those offenses.

"I was busted for a lot of thins: for being drunk, for disturbing the peace, for trespassing, for drunk driving. I was arrested for burglary once, sleeping in a deserted house."

In his 20s, Ellroy posed for an album of mug shots, as a homeless booze and amphetamine addict. He says, "I look back on myself and say, 'You were morally
Bankrupt… You were without redeeming social value. You were an acquired taste that nobody ever acquired.' Yeah. But when push came to shove, I changed and cleaned up my life."

Ellroy kicked liquor and pills, and pointed his obsessive personality at writing: "There have been times when I've been so amped up, so determined to get a paragraph, a line, a simile, a bit of dialogue perfect, that it felt like I was going insane, and my mental computer would implode at any second."

Artist, performer, self-promoter. Ellroy is all these things. He even admits he exploited his own mother to inspire his fiction. Now he needed her to calm his soul.

Stoner says of Ellroy, "Over the last two years, I've been able to experience a grown man who fell in love with his mother for the first time as an adult. And it was an emotional experience for both of us."

Ellroy and Stoner are still running down leads, and Ellroy says they will never stop looking. He tried very hard in the course of this investigation to take himself back to a time and place in 1958. Did he get there?