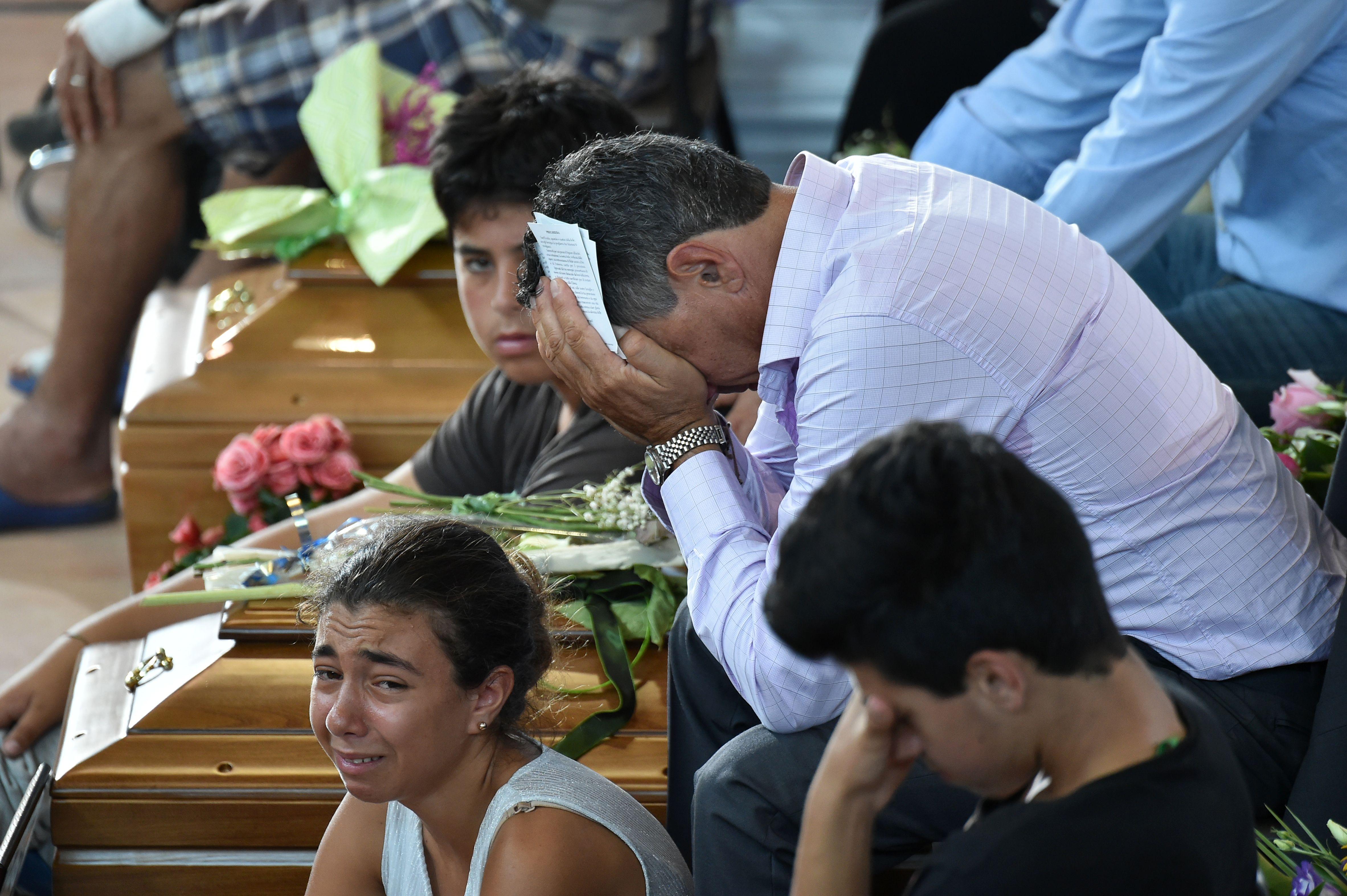 ASCOLI PICENO, Italy - Mourners in Italy prayed, hugged, wept and even applauded as coffins carrying victims of the country’s devastating earthquake passed by at a state funeral Saturday, grieving as one nation after three desperate days of trying to save as many people as possible.

In the central town of Ascoli Piceno, they gathered to bid farewell to 35 of the 290 people confirmed dead so far after the quake that struck a swath of countryside early Wednesday at the foothills of the central Apennine mountains.

The caskets of 35 people had been brought to a community gym - one of the few structures in the area still intact and large enough to hold hundreds of mourners. The local bishop, Giovanni D’Ercole, celebrated Mass beneath a crucifix he had retrieved from one of the damaged churches in the picturesque area of medieval stone towns and hamlets.

Emotions that had been dammed up for days broke in a crescendo of grief. One young man wept over a little girl’s white coffin. Another woman gently stroked another small casket. Many mourners were recovering from injuries themselves, some wrapped in bandages. Everywhere people knelt at coffins, tears running down their cheeks, their arms around loved ones.

“It is a great tragedy. There are no words to describe it,” said Gina Razzetti, a resident at the funeral. “Each one of us has our pain inside. We are thinking about the families who lost relatives, who lost their homes, who lost everything.”

As all of Italy observed a day of national mourning, with flags at half-staff, Bishop D’Ercole urged residents to rebuild their communities.

“Don’t be afraid to cry out your suffering - I have seen a lot of this - but please do not lose courage,” D’Ercole said in his homily. “Only together can we rebuild our houses and our churches. Together, above all, we will be able to restore life to our communities.”

President Sergio Mattarella and Premier Matteo Renzi joined grieving family members, stopping to speak to some of them.

When the caskets were brought out of the gym, the mourners applauded, a traditional Italian way of honoring people who die in tragedy.

The bishop recalled the heartbreaking story of 9-year-old Giulia Rinaldo, whose embrace apparently allowed her younger sister Giorgia to survive.

He said 15 hours after the quake struck Wednesday, he returned to the church in Pescara Del Tronto to recover its crucifix. Close by, firefighters were using their hands to dig out the two sisters.

“The older one, Giulia, was sprawled over the smaller one, Giorgia. Giulia, dead, Giorgia, alive. They were in an embrace,” D’Ercole said.

Giulia was among those buried Saturday, while her younger sister had her fourth birthday at a hospital, trying to recover from the traumatizing ordeal.

“The melancholy grabs on to your heart. You feel a sense of weakness, of depression,” said Fiore Ciotto, a resident of Ascoli Piceno who attended the funeral. “An event like this weakens you physically and mentally.”

Across the area, a cool retreat for those seeking to escape Italy’s hot summers, many of the dead were children and elderly people, some of them visiting grandparents before school resumed.

The magnitude 6.2 quake struck at 3:36 a.m. Wednesday and was felt across a broad swath of central Italy, killing at least 290 people and injuring nearly 400. Nobody has been found alive in the ruins since Wednesday, and hopes have nearly vanished of finding any more survivors.

Before Saturday’s mass funeral, the president visited Amatrice, which bore the brunt of destruction with 230 fatalities and a town turned to rubble and dust. Eleven others died in nearby Accumoli and 50 more in Arquata del Tronto, 10 miles north of Amatrice.

Mattarella arrived by helicopter and was shown the extent of the damage in Amatrice by its mayor, Sergio Pirozzi. The president thanked rescue workers who have been working around the clock, some barely taking breaks for sleeping.

Saturday’s funeral involved most of the dead from Arquata del Tronto.

As deep as their anguish was, Saturday’s mourners at least had coffins with bodies to honor and bury. Many of the dead from Amatrice are now in a refrigerated morgue in an airport hangar in Rieti, the provincial capital that is 40 miles away, awaiting identification.

On Tuesday, a memorial service - without the bodies - will be held for the dead of Amatrice on that battered town’s outskirts.

Hundreds of people have been left homeless by the quake, with many spending their nights in tent cities and a gym in Amatrice, where volunteers are working to provide basic amenities.

With families unable to remain in the houses in Amatrice that were damaged but still standing, two persons were detained Saturday for suspected looting, the mayor said.

Overnight, residents were rattled yet again by a series of aftershocks. The strongest, at 4:50 a.m., had a magnitude of 4.2, according to the U.S. Geological Survey, while the Italian geophysics institute measured it at 4.

The Italian institute says the earthquake caused the ground below Accumoli to sink 8 inches, according to satellite images.