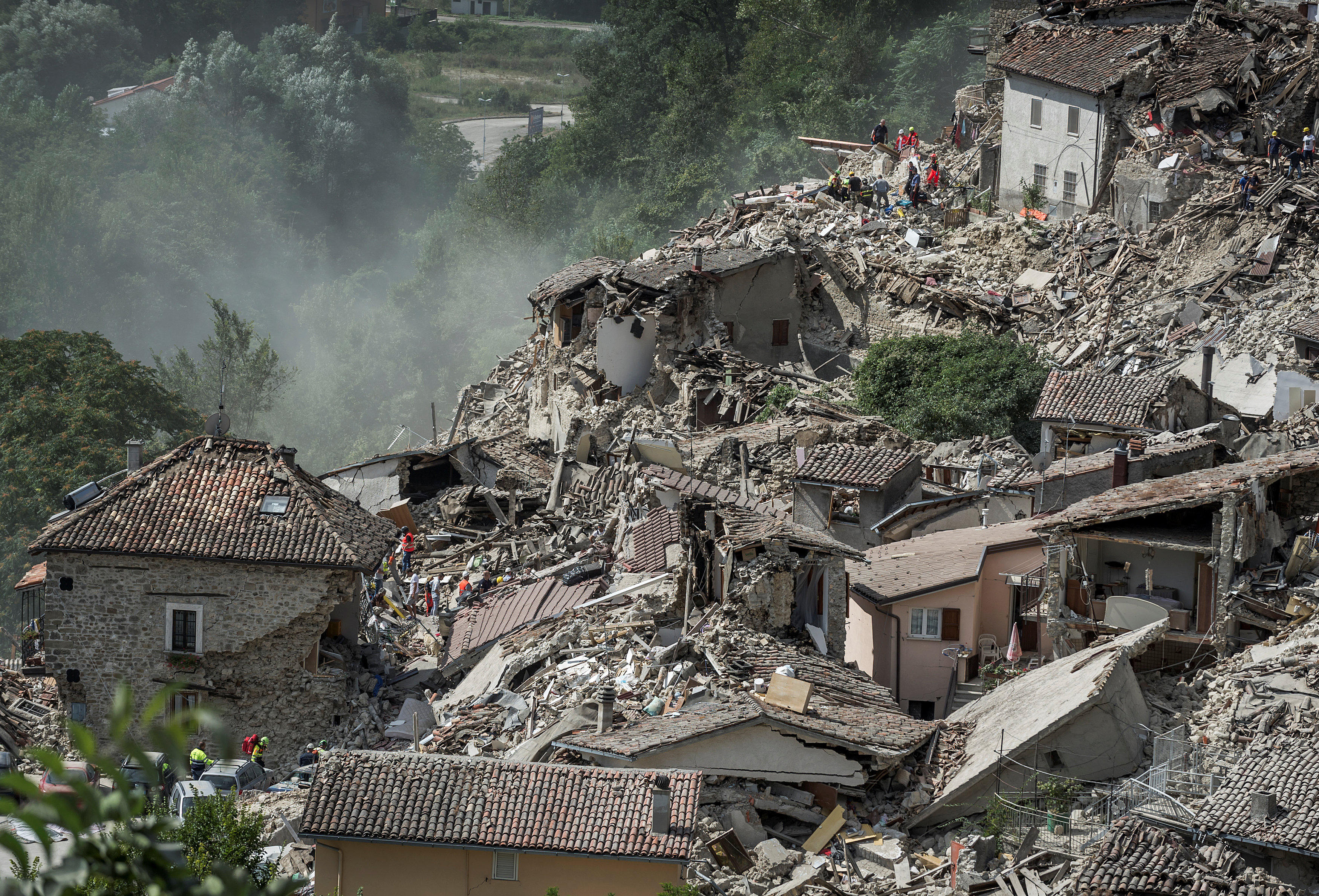 AMATRICE, Italy - Rescue crews using bulldozers and their bare hands raced to dig out survivors from a strong earthquake that reduced three central Italian towns to rubble Wednesday. The death toll stood at 159, but the number of dead and missing was uncertain given the thousands of vacationers in the area for summer’s final days.

Residents wakened before dawn by the temblor emerged from their crumbled homes to find what they described as apocalyptic scenes “like Dante’s Inferno,” with entire blocks of buildings turned into piles of sand and rock, thick dust choking the air and a putrid smell of gas.

“The town isn’t here anymore,” said Sergio Pirozzi, the mayor of the hardest-hit town, Amatrice. “I believe the toll will rise.”

The frantic search for signs of life continued through they day as dazed residents tried to grasp the scale of the disaster, reports CBS News correspondent Seth Doane.

Mostly, what was pulled from the rubble was grim. But there was good news, including an 80-year-old woman who was trapped and ultimately freed.

Dozens of others were pulled out alive by rescue teams and volunteers that poured in from around Italy.

In the evening, about 17 hours after the quake struck, firefighters pulled a 10-year-old girl alive from the rubble in Pescara del Tronto.

“You can hear something under here. Quiet, quiet,” one rescue worker said, before soon urging her on: “Come on, Giulia, come on, Giulia. ... Watch your head.”

Cheers broke out when she was pulled out.

And there were wails when bodies emerged.

“Unfortunately, 90 percent we pull out are dead, but some make it, that’s why we are here,” said Christian Bianchetti, a volunteer from Rieti who was working in devastated Amatrice where flood lights were set up so the rescue could continue through the night.

The magnitude 6.2 quake struck at 3:36 a.m. and was felt across a broad swath of central Italy, including Rome, where residents woke to a long swaying followed by aftershocks. The temblor shook the Lazio region and Umbria and Le Marche on the Adriatic coast, a highly seismic area that has witnessed major quakes in the past.

Premier Matteo Renzi visited the zone Wednesday, greeted rescue teams and survivors, and pledged that “No family, no city, no hamlet will be left behind.” Italy’s civil protection agency reported the death toll had risen to 159 by late Wednesday; at least 368 others were injured.

Worst affected were the tiny towns of Amatrice and Accumoli near Rieti, some 60 miles northeast of Rome, and Pescara del Tronto, some 25 kilometers further east. Italy’s civil protection agency set up tent cities around each hamlet to accommodate the thousands of homeless.

Italy’s health minister, Beatrice Lorenzin, visiting the devastated area, said many of the victims were children: The quake zone is a popular spot for Romans with second homes, and the population swells in August when most Italians take their summer holiday before school resumes.

The medieval center of Amatrice was devastated, with the hardest-hit half of the city cut off by rescue crews digging by hand to get to trapped residents.

The birthplace of the famed spaghetti all’amatriciana bacon and tomato sauce, the city was full for this weekend’s planned festival honoring its native dish. Some 70 guests filled its top Hotel Roma, famed for its amatriciana, where five bodies were pulled from the rubble before the operation was suspended when conditions became too dangerous late Wednesday. Among those killed was an 11-year-old boy who had initially shown signs of life. The fate of the dozens of other guests wasn’t immediately known.

Amatrice is made up of 69 hamlets that teams from around Italy were working to reach with sniffer dogs, earth movers and other heavy equipment. In the city center, rocks and metal tumbled onto the streets and dazed residents huddled in piazzas as more than 200 aftershocks jolted the region throughout the day, some as strong as magnitude 5.1.

“The whole ceiling fell but did not hit me,” marveled resident Maria Gianni. “I just managed to put a pillow on my head and I wasn’t hit, luckily, just slightly injured my leg.”

Another woman, sitting in front of her destroyed home with a blanket over her shoulders, said she didn’t know what had become of her loved ones.

As the August sun turned into a nighttime chill, residents, civil protection workers and even priests dug with shovels, bulldozers and their bare hands to reach survivors. A steady column of dump trucks brought tons of twisted metal, rock and cement down the hill and onto the highway toward Rome, along with a handful of ambulances bringing the injured to Rome hospitals.

“We need chain saws, shears to cut iron bars and jacks to remove beams. Everything, we need everything,” civil protection worker Andrea Gentili told The Associated Press in the early hours of the recovery. Italy’s national blood drive association appealed for donations to Rieti’s hospital.

Despite a massive rescue and relief effort - with army, Alpine crews, carabineri, firefighters, Red Cross crews and volunteers, it wasn’t enough: A few miles north of Amatrice, in Illica, residents complained that rescue workers were slow to arrive and that loved ones were trapped.

“We are waiting for the military,” said resident Alessandra Cappellanti. “There is a base in Ascoli, one in Rieti, and in L’Aquila. And we have not seen a single soldier. We pay! It’s disgusting!”

Agostino Severo, a Rome resident visiting Illica, said workers eventually arrived after an hour or so. “We came out to the piazza, and it looked like Dante’s Inferno,” he said. “People crying for help, help.”

The U.S. Geological Survey reported the quake’s magnitude was 6.2, while the Italian geological service put it at 6 and the European Mediterranean Seismological Center at 6.1. The quake had a shallow depth of between four and 10 kilometers, the agencies said. Generally, shallow earthquakes pack a bigger punch and tend to be more damaging than deeper quakes.

“The Apennine mountains in central Italy have the highest seismic hazard in Western Europe and earthquakes of this magnitude are common,” noted Richard Walters, a lecturer in Earth sciences at Durham University in Britain.

The devastation harked back to the 2009 quake that killed more than 300 people in and around L’Aquila, about 55 miles south of the latest quake. The town, which still hasn’t fully recovered, sent emergency teams Wednesday to help with the rescue and set up tent camps for residents unwilling to stay indoors because of aftershocks.

“I don’t know what to say. We are living this immense tragedy,” said a tearful Rev. Savino D’Amelio, a parish priest in Amatrice. “We are only hoping there will be the least number of victims possible and that we all have the courage to move on.”

Another hard-hit town was Pescara del Tronto, in the Le Marche region, where the main road was covered in debris.

Residents were digging their neighbors out by hand before emergency crews arrived. Aerial photos taken by regional firefighters showed the town essentially flattened and under a thick gray coat of dust; Italy requested EU satellite images of the whole area to get the scope of the damage.

“There are broken liquor bottles all over the place,” said Gino Petrucci, owner of a bar in nearby Arquata Del Tronto where he was beginning the long cleanup.

One rescue was particularly delicate as a ranger in Capodacqua, in the Marche province of Ascoli Piceno, diplomatically tried to keep an 80-year-old woman calm as she begged to get to a toilet, even though she was trapped in the rubble.

“Listen, I know it’s not nice to say but if you need to pee you just do it,” he said. “Now I move away a little bit and you do pee, please.”

The mayor of Accumoli, Stefano Petrucci, said a family of four had died there, one of the few young families who had decided to stay in the area. He wept as he noted that the tiny hamlet of 700 swells to 2,000 in the summer months, and that he feared for the future of the town.

A 1997 quake killed a dozen people in central Italy and severely damaged one of the jewels of Umbria, the Basilica of St. Francis in Assisi, filled with Giotto frescoes. The Franciscan friars who are the custodians of the basilica reported no immediate damage from Wednesday’s temblor.

Pope Francis skipped his traditional catechism for his Wednesday general audience and instead invited the thousands of pilgrims in St. Peter’s Square to recite the rosary with him. He also sent a six-man squad from the Vatican’s fire department to help with the rescue.