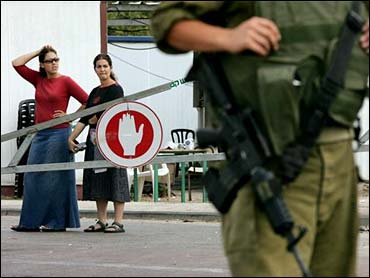 The Israeli military on Thursday isolated the Gaza Strip, declaring it a "closed military zone" to prevent Jewish extremists from going in after a series of violent incidents in recent days.

Tension has been rising with Israel's planned pullout from Gaza less than two months away, reports CBS News Correspondent Robert Berger. Only residents of Gaza are now allowed to enter and leave the area, in an attempt to prevent Jewish militants from entering Gaza to resist the withdrawal. The settlers say the government has imprisoned them, before expelling them.

Also Thursday, a group of about 50 Gaza pullout opponents briefly blocked a main Jerusalem thoroughfare, police said. The attempt came a day after hundreds of protesters shut down main thoroughfares throughout Israel by lying down on the roads. On Wednesday, police pushed, shoved and dragged protesters out of the road and used a water cannon to disperse the crowds.

Jewish extremists on Wednesday also clashed with both Israeli security forces and Palestinian civilians, severely wounding a Palestinian. Settlers and soldiers also clashed over the weekend.

"In the past day there has been another serious escalation of extremist activity," an army statement said. "There is intelligence information that more extremist groups are moving toward the Gaza Strip with the intention of strengthening their friends and to escalate the provocative acts."

The army sealed the Jewish settlements, preventing residents from traveling between the towns.

Hundreds of Israeli soldiers Thursday raided a Gaza Strip hotel to remove about 150 Gaza pullout opponents holed up inside.

About 10 busloads of soldiers and paramilitary police went room-to-room to remove the Jewish extremists, who had been blockaded inside for several weeks. They had stockpiled food and surrounded the hotel with barbed-wire fences.

Residents protested against the closure of the Gaza Strip.

"Why are they disturbing our daily life. People have to go out, work, carry on their day-to-day routine," Debby Rozen, a resident of the Neve Dekalim settlement told Israel Radio. "This is totally senseless," she said.

Cabinet Minister Haim Ramon said the purpose was to prevent Jewish militants from getting to Gaza.

"They will start to fight against all the military and all our soldiers in Gaza," Ramon said.

As soon as the closure was announced, at least one bus of right-wing activists left Jerusalem for Gaza, reports The Jerusalem Post, with more expected. Other extremists abandoned their vehicles near police roadblocks and hiked across Negev orchards in order to bypass the checkpoints.

In an interview published Thursday, Prime Minister Ariel Sharon said he ordered police to crack down on the extremists.

"This bothers me exceptionally. This is an act of savagery, vulgarity and irresponsibility," Sharon told the Haaretz daily. "The country's citizens must understand this danger, and every measure must be taken to end this rampaging."

The extremists, who are opposed to Israel's planned pullout from Gaza and part of the West Bank, clashed with soldiers and Palestinians before being evicted from a house they commandeered on the Gaza sea shore Wednesday.

During the violence a Palestinian youth was seriously wounded when some of the Jewish youths cornered him, throwing stones at him and beating him unconscious. The incident was caught on film and sparked widespread condemnation across Israel.

Declaring Gaza a closed military area allows the army and police to remove anyone without a resident permit, making it easier for the security forces to control the area. Officials had said they reserved the right to seal off Gaza, saying the decision to do so would depend on the level of unrest.

Public Security Minister Gideon Ezra said police were doing all they could to apprehend those behind Wednesday's violence, which he called a "lynch" attempt. "We are obligated to find those who were behind this," he told Israel Radio.

The clash in Gaza showed that a handful of violent extremists could change the nature of Sharon's "disengagement" plan, from unarmed soldiers dragging protesting but otherwise peaceful settlers from their homes, to violent clashes, possibly with firearms, between security forces and extremists bent on foiling the evacuation any way they can. Disengagement, or Israel's withdrawal from all Gaza settlements and four West Bank settlements, is set to begin in mid-August.

"The battle now is not over the disengagement plan, but over the image and future of Israel and under no circumstances can we allow a lawless gang to try take control of life in Israel," Sharon told Haaretz.

The clashes came as extremists also attempted to tie up traffic throughout Israel, blocking several major intersections around Israel.

Police used a water cannon to disperse protesters blocking the highway at the entrance to Jerusalem, displaying a new determination to counter the disruptions.

Lawmaker Yossi Sarid of the dovish Meretz Party accused the police of failing to do more to prevent the violence in Gaza.

"What a pathetic country that the prime minister has to give an order to apprehend those who carried out a lynch," Sarid told Israel Radio. "Is there any one in the army or in the police ... Who can explain why they were not arrested at the scene?" he said.

Settler leaders also condemned the incident, saying the youths were from a violent fringe group and did not represent the settler movement. "There is no connection between Judaism and those who carried out this," said Shaul Yahalom, a lawmaker form the National Religious Party.