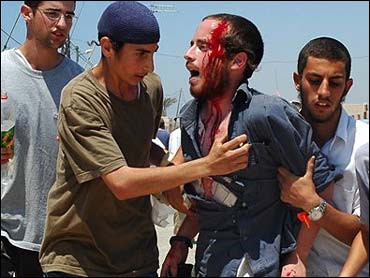 Jewish settlers got militant Wednesday over Israel's plans to pull out of the Gaza Strip in two months, both inside and outside Israel.

Soldiers fired into the air to stop a clash between settlers and Palestinian residents at an outpost on the outskirts of the Shirat Hayam settlement. The clash broke out shortly after Israeli soldiers forcibly removed about 20 settlers who had holed up in the outpost — an abandoned Palestinian home. Settlers and Palestinians threw stones at one another, wounding at least three people, witnesses said.

Young Jewish settlers went on a stone-throwing rampage after clashing with Israeli troops at a house they occupied on the outskirts of this Jewish settlement Wednesday, attacking nearby Palestinian residents in a violent melee that left at least three people wounded. A Palestinian was in critical condition.

During afternoon rush hour, protesters periodically blocked the highway at the entrance to Jerusalem. Police used a water cannon to disperse the demonstrators, most of them children and teenagers, and some arrests were made.

Thousands of police were out in force to keep highways open after an extremist group vowed to stop traffic all over the country. The only other successful attempt to block a highway was reported near the northern Israeli port city of Haifa.

The outpost clash began with dozens of Jewish youths exchanged blows with soldiers sent to evict them from the outpost. Soldiers restrained the activists and dragged several through the sand into a waiting army vehicle. There were no immediate reports of injuries.

The settlers established the outpost earlier this week after Israeli troops demolished 11 nearby buildings. Authorities had feared that opponents of Israel's planned withdrawal from the Gaza Strip would use the buildings as centers of resistance during the evacuation, set to begin in mid-August.

Several cars were damaged on the main Jerusalem-Tel Aviv highway in the morning protest.

"This was an ugly act, throwing oil and hundreds of 'ninja' nails on the road," traffic police chief Reuven Edri told Israel Radio. No injuries were reported, and the road was reopened within an hour.

"We don't support the idea of blocking roads, in the case of roads being blocked," she said. "We think that it lessens the support of people."

Internal Security Minister Gideon Ezra promised a harsh response. "When we find out who did this we will deal with them with the full force of the law. This could have caused a terrible accident," he told the radio.

"We will act with all the power we have to prevent these road blockings," Ezra said.

Prime Minister Ariel Sharon said authorities should use an "iron fist" against groups who use violence to resist his plan to withdraw from the Gaza Strip.

"We cannot allow gangs to undermine the country," Sharon told a meeting of government ministers. "We have to act with an iron fist against hooligans," he said, according to meeting participants.

Israel plans to withdraw from the entire Gaza Strip and four small West Bank settlements in mid-August, uprooting about 9,000 Jewish settlers from their homes.

Settler groups strongly oppose the plan, and with the pullout approaching, authorities fear the resistance could turn increasingly violent. Mainstream settler groups have said they will resist only through nonviolent means.

The extremist group National Home organized the highway protests, but condemned Wednesday morning's protest at the settlement and said it was not involved. "This is a dangerous provocation that endangers lives and runs contrary to our principles of nonviolent civil disobedience," the group said. The main Gaza settlers' group also condemned the protest.

Also Wednesday, police said they had arrested a number of opponents of the withdrawal who were planning to disrupt water and electricity supplies.

"We have information, information that was confirmed after a number of arrests, that there is an intention to disrupt and harm infrastructures," police commander Yaakov Peleg told Army Radio. "This is dangerous," he said, adding that the investigation was still in the early stages.

Israeli and Palestinian leaders on Tuesday both warned their people against violence, reflecting concern that extremists on both sides could trigger confrontations during the evacuation.

"We do not want to allow even a single excuse for anyone to blame us for sabotaging the disengagement," Palestinian Prime Minister Ahmed Qureia said after a Cabinet meeting in Gaza City. "We will hold any party totally responsible if they attempt to gamble with our future."

After first presenting the pullout as a unilateral step, Israel has been moving to coordinate with the Palestinian Authority to ensure an orderly handover and to sideline the violent Islamic Hamas, which has considerable strength in Gaza. The coordination efforts, however, appear to have made little progress.

Mohammad Dahlan, the Palestinian minister in charge of planning for the Gaza pullout, accused Israel of failing to work seriously with the Palestinians. "Until now, Israel hasn't shown any serious attitude in the coordination. They provide us with no information, just general talks," he told reporters late Tuesday.