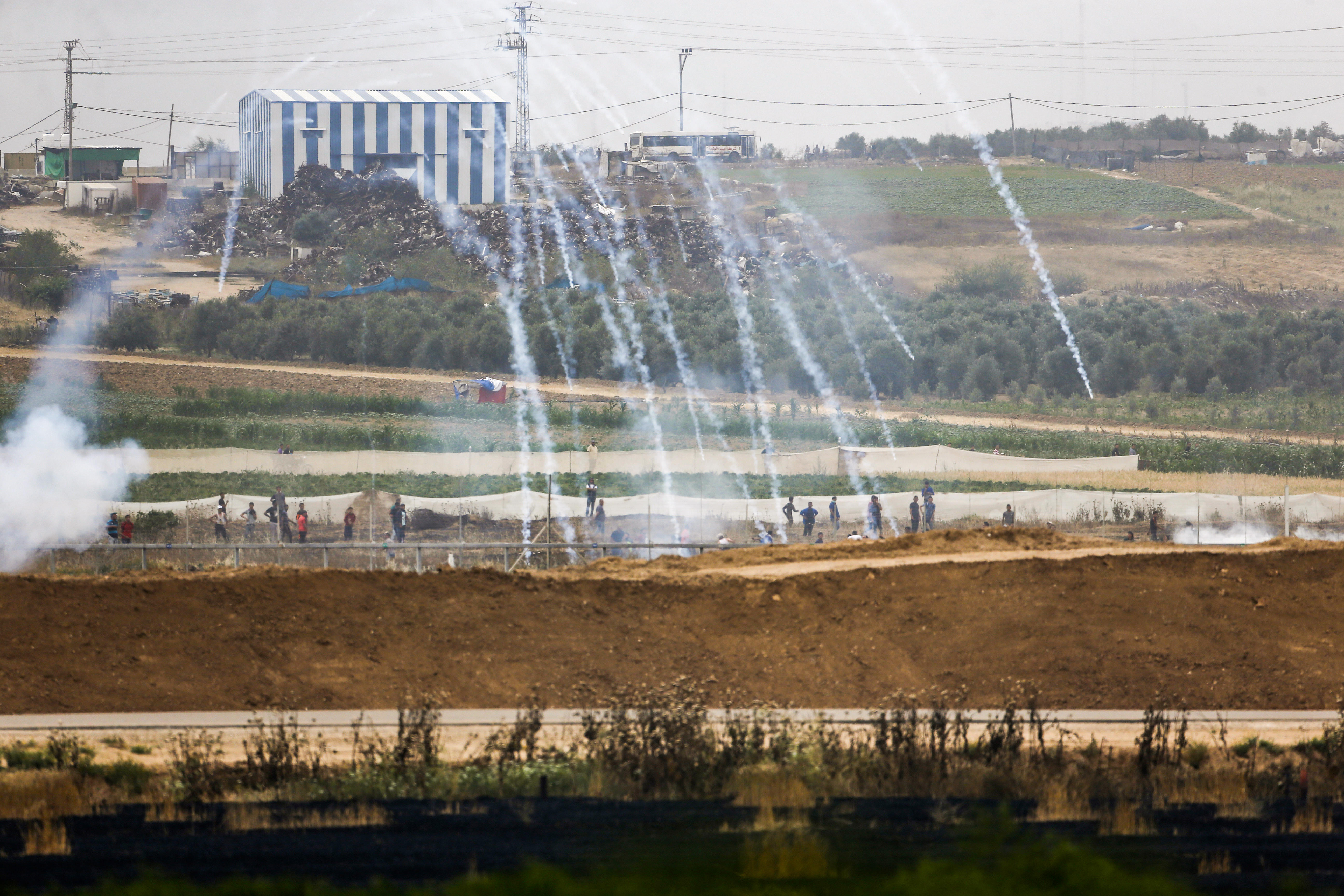 GAZA CITY, Gaza Strip -- Hundreds of Palestinians headed to Gaza's border fence with Israel on Friday for another weekly protest that organizers from the militant Islamic Hamas group have said might culminate in a mass breach later this month. About 300 Palestinians gathered near one of five protest camps set up several hundred meters from the fence after Friday prayers. Some moved closer to the fence, throwing stones and burning tires. Israeli soldiers fired live rounds and tear gas.

Israeli soldiers used loudspeakers to warn protesters to step back. "You, stop bringing tires. The tires cause shootings."

Hamas has urged mass rallies at the border every Friday as part of a week's long campaign of protests against a decade-old blockade of the territory.

Israel is closely guarding the fence and warns it will not tolerate attempts to breach it.

Yehiyeh Amarin, an 18-year-old protester, was among nearly two dozen activists rolling tires toward the fence on Friday to set them ablaze. His face partially covered with a black-and-white "keffiyeh" scarf, he's part of a group of young protesters calling themselves "the tires' unit," responsible for collecting and burning old tires along the border.

"If no solution happens by May 15 we will continue the protests or we die. We will cut through the fence." Amarin said, as another protester beside him brandished a yellow wire cutter.

He said they spend their weekdays collecting tires to bring to the border fence on Friday protests which they attend every week.

"We want a dignified life and a return to our lands," he said.

The marches are part of what organizers, led by Hamas, have billed as an escalating showdown with Israel, to culminate in a mass march on May 15.

Hamas says the protests are aimed at breaking a crippling border blockade that was imposed by Israel and Egypt after the Islamic militant group assumed control of Gaza in 2007.

Israel says it's defending its sovereign border, including nearby communities, and that soldiers only target instigators.

It accuses Hamas, a militant group sworn to Israel's destruction, of trying to carry out attacks under the guise of the mass protests. It has said that some of those protesting at the border over the past few weeks tried to damage the border fence or plant explosives along it.

Others have hurled improvised explosives, firebombs, or flown kites attached to burning rags to set Israeli fields on fire.

Since weekly marches began in late March, 39 protesters have been killed and more than 1,700 wounded by army fire.

Rights groups say open-fire regulations are unlawful because they permit troops to use potentially lethal force against unarmed protesters.

The weekly marches also press for a "right of return" of Palestinian refugees and their descendants to what is now Israel. Hundreds of thousands of Palestinians fled or were displaced in the 1948 war over Israel's creation.

Palestinians mark May 15, the anniversary of Israel's founding, as their "nakba," or catastrophe.