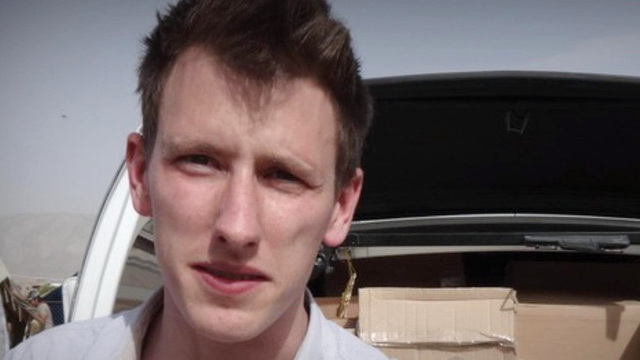 BEIRUT - The Islamic State of Iraq and Syria (ISIS, or ISIL) released a graphic video on Sunday in which a black-clad militant claimed to have beheaded U.S. aid worker Peter Kassig, who was captured last year and changed his name to Abdul-Rahman while in captivity.

The militant was standing over a severed head, but it was not immediately possible to confirm that it was Kassig, 26, who was pictured in the video.

President Obama confirmed Kassig's death in a statement released Sunday aboard Air Force One en route to Joint Base Andrews in Maryland offering prayers and condolences to Kassig's parents and family.

"Abdul Rahman was taken from us in an act of pure evil by a terrorist group that the world rightly associates with inhumanity," the president said.

The video, which was posted on websites used by the group in the past, appeared to be the latest in a series of blood-soaked messages to the U.S. warning of further brutality if it does not abandon its air campaign in Iraq and Syria.

"This is Peter Edward Kassig, a U.S. citizen, of your country; Peter who fought against the Muslims in Iraq, while serving as a soldier," the militant says near the end of the nearly 16-minute video. He speaks in an audible British accent despite his voice being distorted to make it more difficult to identify him.

The main speaker in the video identifies their location as Dabiq, a small town in the northern Syrian province of Aleppo, near the Turkish border.

The video also shows what appears to be the mass beheading of several Syrian soldiers captured by the group. The militants warn that U.S. soldiers will meet a similar fate.

"We say to you, Obama...you claim to have withdrawn from Iraq four years ago," the militant said. "Here you are: you have not withdrawn. Rather, you hid some of your forces behind your proxies," he said, apparently referring to Western-backed Syrian rebels, Kurdish fighters and the Iraqi military.

"Here we are, burying the first American crusader in Dabiq, eagerly waiting for the remainder of your armies to arrive."

Kassig, a former U.S. Army Ranger, was providing medical aid to Syrians fleeing the civil war when he was captured inside Syria on Oct. 1, 2013. His friends say he converted to Islam in captivity and took the first name Abdul-Rahman.

The latest video did not show the person identified as Kassig being beheaded. Unlike previous videos, it did not show other Western captives or directly threaten to behead anyone else.

The group also holds British photojournalist John Cantlie, who has been shown in several videos delivering long statements in English on the group's behalf, perhaps under duress. They are also reportedly holding a female American aid worker.

Kassig's family released a statement after confirmation from the U.S. government, praising their son and hoping for the release of other captives.

"We are heartbroken to learn that our son, Abdul-Rahman Peter Kassig, has lost his life as a result of his love for the Syrian people and his desire to ease their suffering. Our heart also goes out to the families of the Syrians who lost their lives, along with our son," they said. "We are incredibly proud of our son for living his life according to his humanitarian calling. We will work every day to keep his legacy alive as best we can."

"We remain heartbroken, also, for the families of the other captives who did not make it home safely," the statement continued. "The families of James Foley, Steven Sotloff, David Haines, and Alan Henning remain in our daily thoughts and prayers, and we pray for the safe return of all remaining captives held by all sides of the Syrian civil war."

This Friday marked 6 weeks since the last ISIS video threatening to kill Kassig. That is the longest stretch of time between the release and a beheading since ISIS started killing Westerners on camera this summer.

There had been reason to believe that Kassig was alive until very recently, reports CBS News correspondent Margaret Brennan. Sources also tell CBS News ‎that an online campaign by friends, family to speak of Peter's conversion and help of fellow Muslims had been driving debate in the jihadist community regarding the morality of execution.

"Like Jim Foley and Steven Fotloff before him, his life and deeds stand in stark contrast to everything that ISIL represents," Mr. Obama said in his statement, using an alternate acronym for the group. "While ISIL revels in the slaughter of innocents, including Muslims, and is bent only on sowing death and destruction, Abdul-Rahman was a humanitarian who worked to save the lives of Syrians injured and dispossessed by the Syrian conflict...ISIL's actions represent no faith, least of all the Muslim faith which Abdul- Rahman adopted as his own."

"His brutal murder is one more reminder of ISIL's ruthless barbarity; there is no starker contrast between the inhumanity of ISIL and the bright and generous spirit of the young man they murdered," said Hagel.

Kassig formed the aid organization Special Emergency Response and Assistance, or SERA, in Turkey to provide aid and assistance to Syrian refugees. He began delivering food and medical supplies to Syrian refugee camps in 2012 and is also a trained medical assistant who provided trauma care to wounded Syrian civilians. His friends say he helped train 150 civilians in providing medical aid.

ISIS has beheaded and shot dead hundreds of captives -- mainly Syrian and Iraqi soldiers -- during its sweep across the two countries, and has celebrated its mass killings in a series of slickly produced, extremely graphic videos.

The group has declared an Islamic caliphate in the areas under its control in Syria and Iraq, which it governs according to an extremely violent interpretation of Shariah law.

The U.S. began launching air strikes in Iraq and Syria earlier this year in a bid to halt the group's rapid advance and eventually degrade and destroy it.

The fight against the militant group adds another layer to Syria's complex civil war, now in its fourth year, which began as an uprising against President Bashar Assad.

ISIS emerged from the remains of al Qaida in Iraq and spread to Syria, where it battled both government forces and rebel groups as it carved out its self-styled Islamic state.

In June the group swept into northern Iraq, capturing about a third of the country, including the second largest city Mosul, and eventually prompting the U.S. to resume military operations in the country less than three years after withdrawing. In September the U.S. expanded the air campaign to Syria.